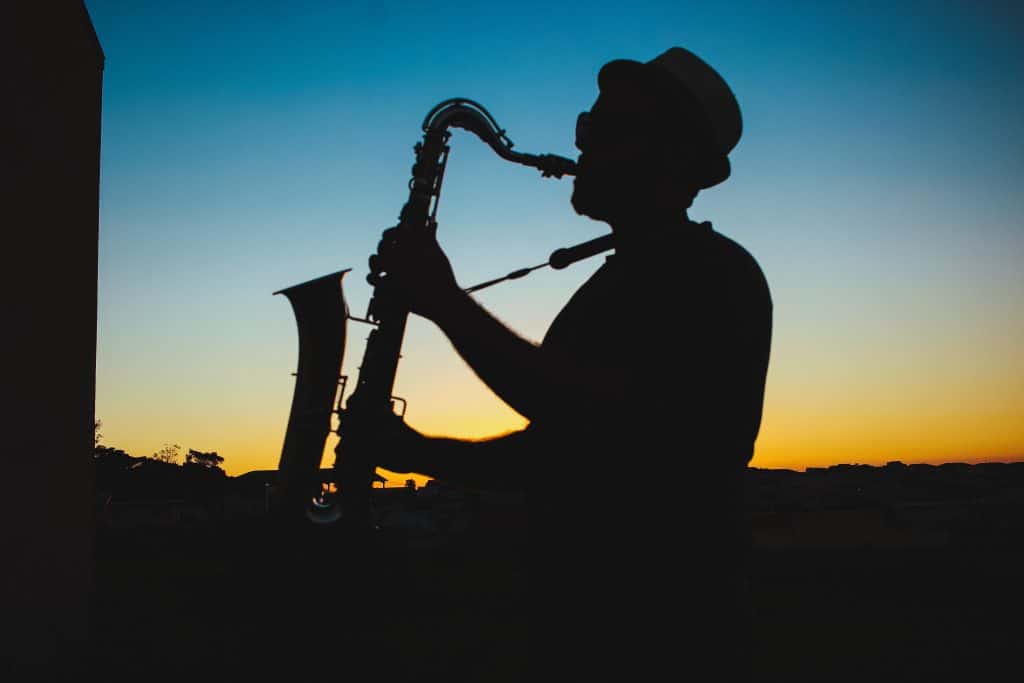 Jazz is an amazing genre of music whose beauty is only matched by its complexity.

It can be pretty intimidating for new drummers out there who want to play but don't know where to start. However, there are definitely songs we can practice to get ourselves used to the swing rhythms of jazz.

Let's start out but explaining how jazz works.

How to approach jazz on a drum set

The main instrument in jazz is the ride cymbal. The ride cymbal is typically utilized for keeping a constant-rhythm pattern, every beat or regularly, as the music needs.

In jazz the ride cymbal is king. Many drummers have a single main ride, situated near their best hand-- within easy playing reach. They can also have a couple of other ones as well.

The main pattern of the ride cymbal is a triplet feel. It goes like this.

If you would like a deeper explanation, listen to John Riley's explanation of the ride cymbal.

The next main instrument is the hi-hat. Like the bass drum, the hi-hat has a foot pedal. When the foot pedal is pushed down, a system causes the thin pole to move down, causing the cymbals to move together.

We step down on the hi-hats usually every 2 and 4 beat. This is to give emphasis on these beats.

Let's hear how this sounds:

Ride and hi-hat together

If you can play these two rhythms at the same time through a whole jazz song you are halfway there. The rest of the drums (the kick and the snare) fill in the gaps and just give emphasis to the ride cymbal and hi-hat.

Let's take a look at a couple typical jazz 'beats'

Before we start adding the bass drum I would just get comfortable putting my snare drum on as many places in the beat as I can. Start by putting the snare drum on the 'a' of the beat (or the 'a' if you are counting in eighth notes).

Now let's add the bass drum. Don't overload yourself. Just pick one place in the beat and stick the bass drum there.

So as you can see there are many different possibilities.

Jazz songs to play on drums for beginners

So what are some songs that we can learn to play? How do jazz songs work even?

Usually, when a horn or a guitar player wants to learn a jazz song they want to learn the head, which is the initial melody and harmony. Later, they will just play the harmony and each member of the band takes turns soloing over the harmony.

This is how the structure of a jazz song works.

So us drummers need to play it pretty simple during the 'head' and then we need to be open to improvise with the soloists. When you are playing accompaniment during a saxophone solo that is called 'comping'. It basically means that you are supporting their solo.

Let's start with the ones that everyone probably knows. The album 'Kind of Blue' by Miles Davis is probably one of the most famous albums in history, so let's look for some medium tempo swing on that record.

Freddy Freeloader is an easy jazz standard, both melodically and rhythmically. The song is a medium-slow swing tempo which an instantly memorizable melody.

This song is also very simple because the form is quite straight-forward. It is a 12 bar blues form, which makes it recognizable to most players and easy to not get lost during the solo section.

Art Blakey was a master timekeeper. There is absolutely no doubt where his time was, he was as clear as a bell and as strong as an anchor in leading his band.

You can find him throughout the song just playing the snare drum on the 2 and the 4—no-frills. That groove looks like this.

If you really want to practice your time feel listen and play to Blakey, he has some great live records and his playing is unmistakable in the jazz drumming world.

Returning to Miles Davis we have the infamous Bag's Groove which was actually written by Milt Jackson who is the vibraphone player on the song.

This song has a great slow swing vibe that you can just listen to all day.

Kenny Clarke is the drummer and he plays exceptionally simple and melodic so it will be easy to grasp for a beginning drummer.

Taking it up a bit in tempo we have Blue Train, a blues form by the master saxophonist John Coltrane.

This song is pretty simple to play along to for most of it, however, the band does diverge off into tangents where they actually shift the tempo.

If you can't play along to it yet, just still back and marvel at their work.

Take the A Train by Duke Ellington

Here is a classic that still gets called at jam sessions all the time. At the time Duke Ellington was the man. He composed countless tunes and full band arrangements.

His legacy can still be enjoyed however and many of his tunes carry on.

No matter how hard we try we can't stop going back to Miles. Especially for a beginner drummer he has so many resources for us to get under our hands.

This song, Solar, is a classic that is always called in jam sessions. It starts off with brushes but then goes into sticks. Most drummers simply play the whole tune with sticks.