6 Types of Drums Used in an Orchestra 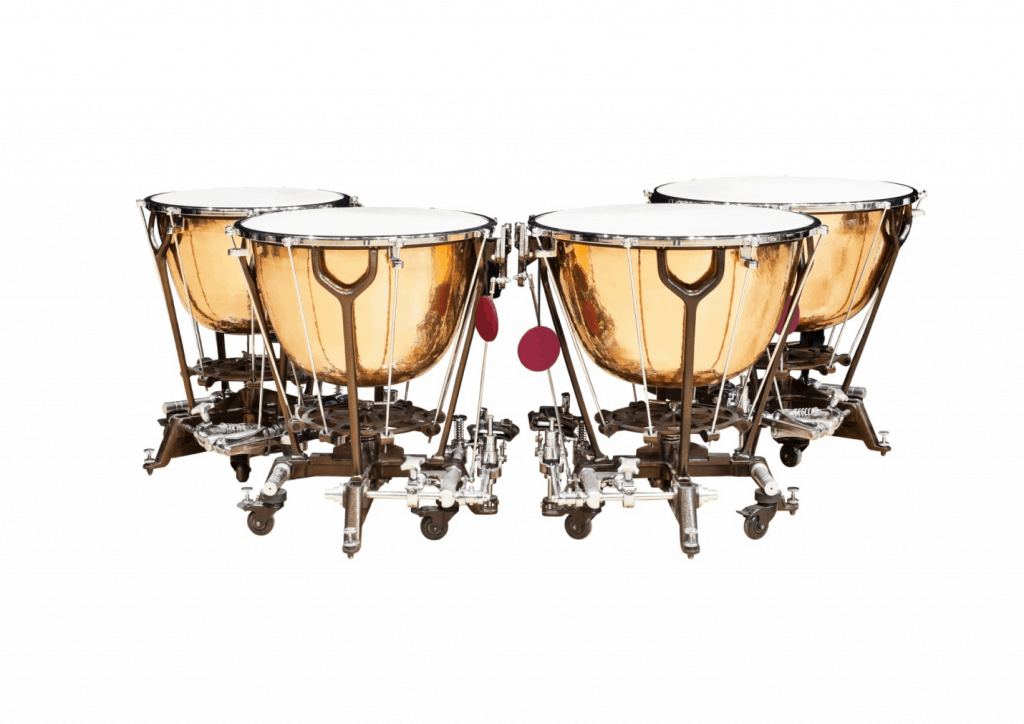 Orchestral percussion usually doesn’t require a drum set but we see one in several compositions. The popularity of drums in orchestras dates back to the earliest of times.

People have been using different types of drums in an orchestra to maintain the rhythm, produce unique sounds, and add excitement to the performance ever since.

Let’s discuss the anatomy, origin, and function of different drums used in an orchestra .

No orchestral percussion is complete without a timpani! 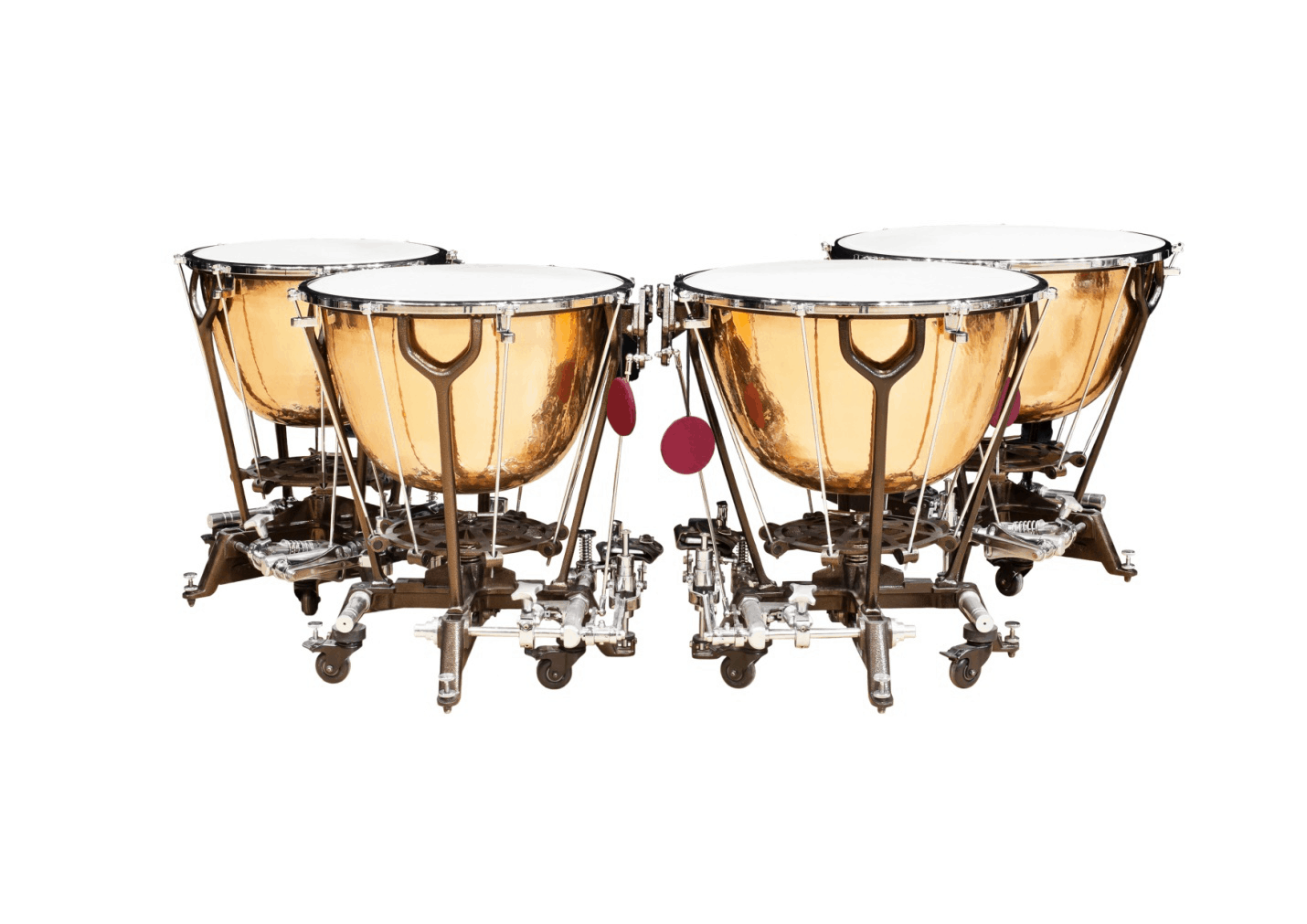 These drums look like large copper pots featuring drumheads typically made of calfskin or sometimes simply plastic stretched over their tops.

The best thing about timpani is that they are tuned instruments, meaning you can use them to produce different sounds to play different notes.

Drummers can loosen or stretch the drumheads attached to the foot pedal to change the pitch while playing in an orchestra. The weight of a single timpani drum can be as much as 140 pounds!

Timpani drums are an important member of the orchestral percussion family because they support the rhythm, melody, and harmony of the music.

Most orchestras feature a set of four timpani where each is of different size and set to a unique pitch.

Typically, one musician plays them by hitting the drumheads with mallets or wooden sticks.

Great timpani players all have one thing in common – good ears. This is because they often need to change the pitch of the drum multiple times during a single performance.

The snare drum is one of the orchestral percussion instruments that you can easily spot from a distance. 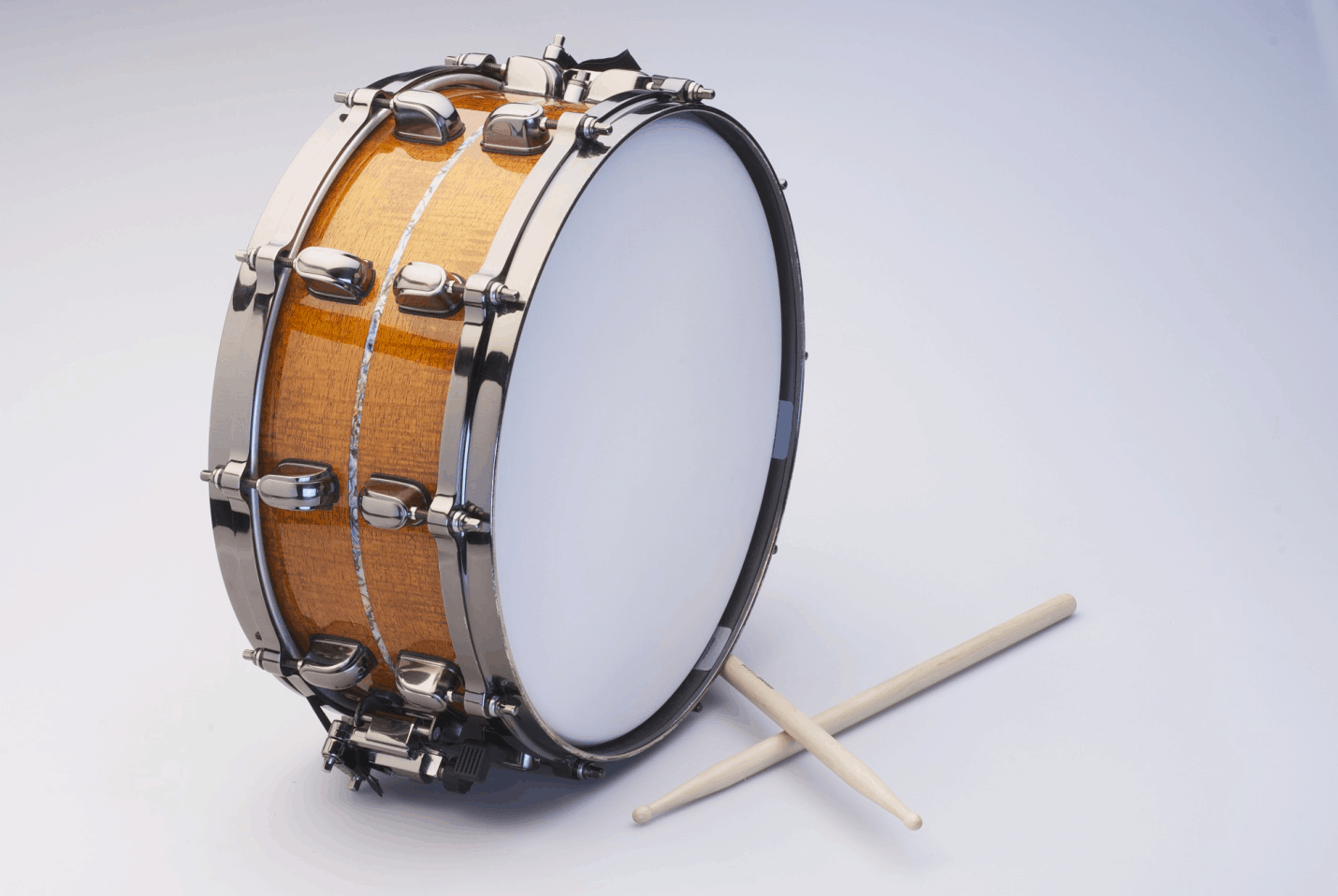 Also known as a side drum, a snare drum is a small drum made of wood or brass. The drumhead is made of either calfskin or plastic stretched over the ends of a hollow cylinder.

The unique rattling sound of a snare drum comes from a set of wire-wrapped strings stretched across the snare, bottom head.

Drummers can turn the snare on or off to meet the requirements of the musical piece using the small switch located on the side of the drum.

As an untuned drum, it doesn’t allow the drummers to play with distinctive pitches. It is used to accent the rhythm and for playing special sounds in an orchestra, particularly in pieces with a military or marching band theme.

A snare drum is played by hitting the drumheads with drumsticks, mallets, or brushes.

When played and tuned correctly, it can produce sounds ranging from quick and short to warm and thick tunes.

It is usually used in orchestra to support and accentuate the rhythms played by the trumpets throughout the performance.

Just like double bass, a bass drum is perhaps the biggest instrument in the orchestral percussion family that makes the softest sounds. 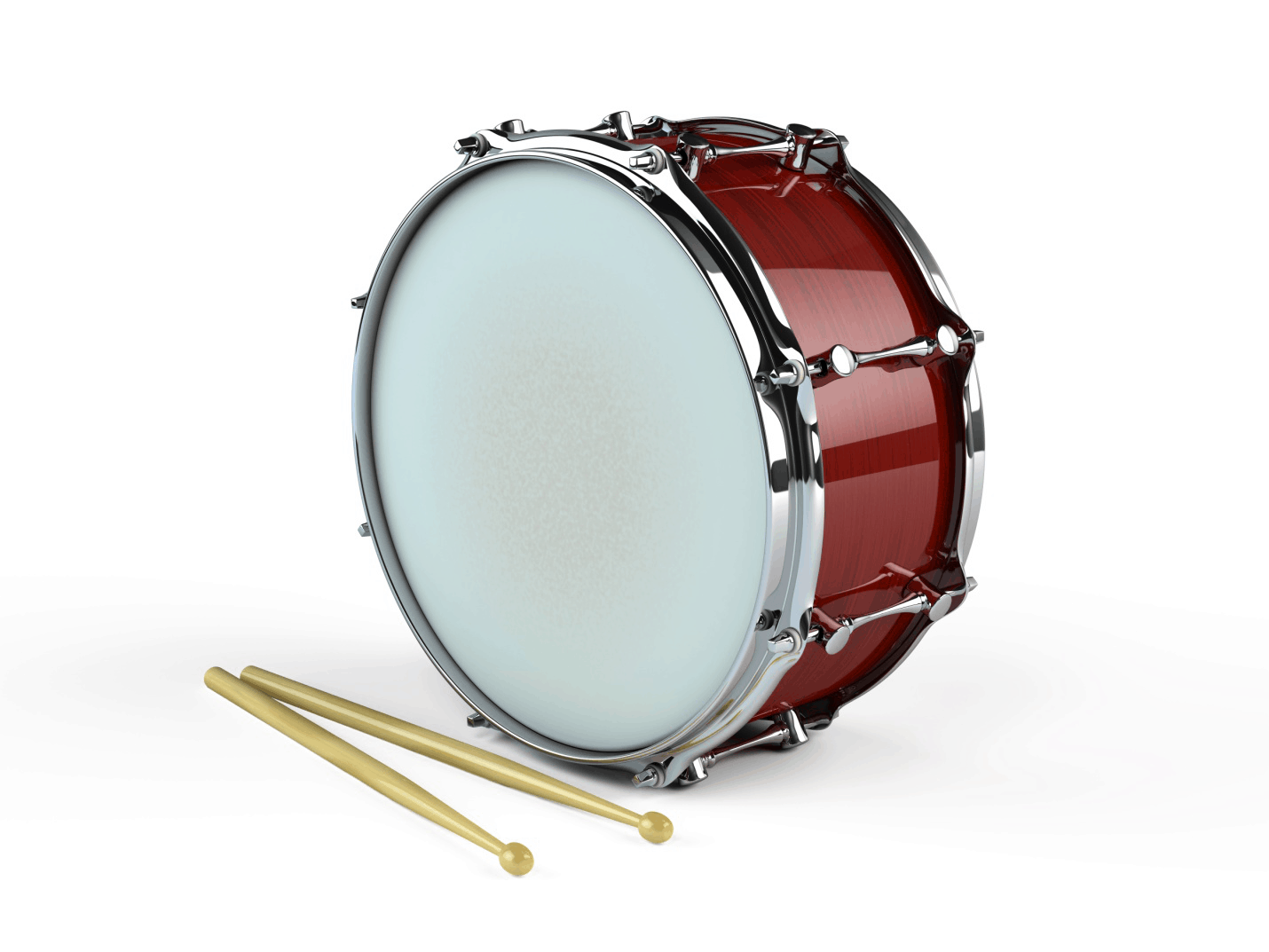 The built of this drum resembles that of a large snare drum minus the snare. Like snare drum, a bass drum is also an unturned instrument.

It is played by striking the drumheads with soft-headed sticks that usually have a covering of sheepskin or felt.

Expert drummers use this drum to produce a variety of sounds, including both loud thunderous notes to soft whisper-like sounds.

In orchestra, a bass drum plays a crucial role in creating the overall feel of the performance. As per the

orchestral literature, this drum is typically used to support, color, and shade the orchestral sounds rather than to provide a solid foundation for rhythm as it does in marching bands.

Drummers use this drum to accentuate the strong points of musical composition and combine it with cymbals to improve the overall beat.

Considering the list of variables that are subject to change during the playing of a bass drum, including beater, stroke, beating location, and muffling, the drummers require a certain level of skill to play this drum in an orchestral setting.

A tambourine is a small drum with a wooden or plastic frame featuring a set of metal jingles at the edges. 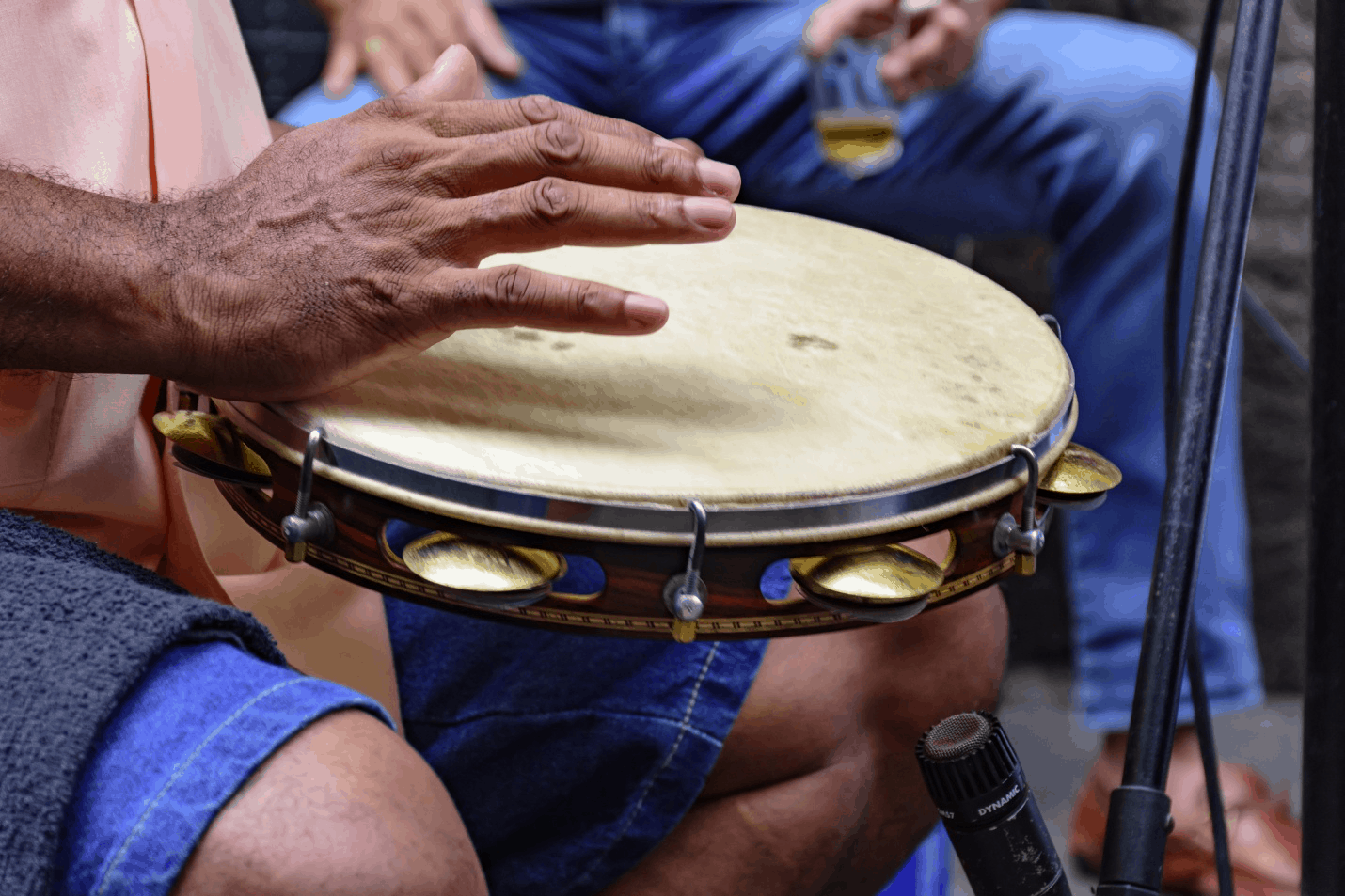 Both the drumhead and the jingles are unturned and so, the variety of pitches to be produced by the drum is pretty limited.

Drummers are required to hold the drum in one hand and tap, shake or hit it with the other hand to produce the desired sounds.

As with the bass drums, concert toms are used by drummers to make an orchestral performance more colorful and shaded. However, they can also be used like snare drums.

It produces a sound similar to what a snare drum produces with the snare turned off.

Its diameter ranges from 8-16 inches while its concert bass usually 30-45 inches. Due to its size, it produces warm yet sharp sounds.

When playing in an orchestral setting, drummers typically consider the feel of the musical piece as well as the time when it was composed to produce the desired sounds with a concert tom.

Gong drums are an uncommon type of drums that are somewhat similar to a concert tom. These drums have a single large drumhead stretched over a large drum shell. 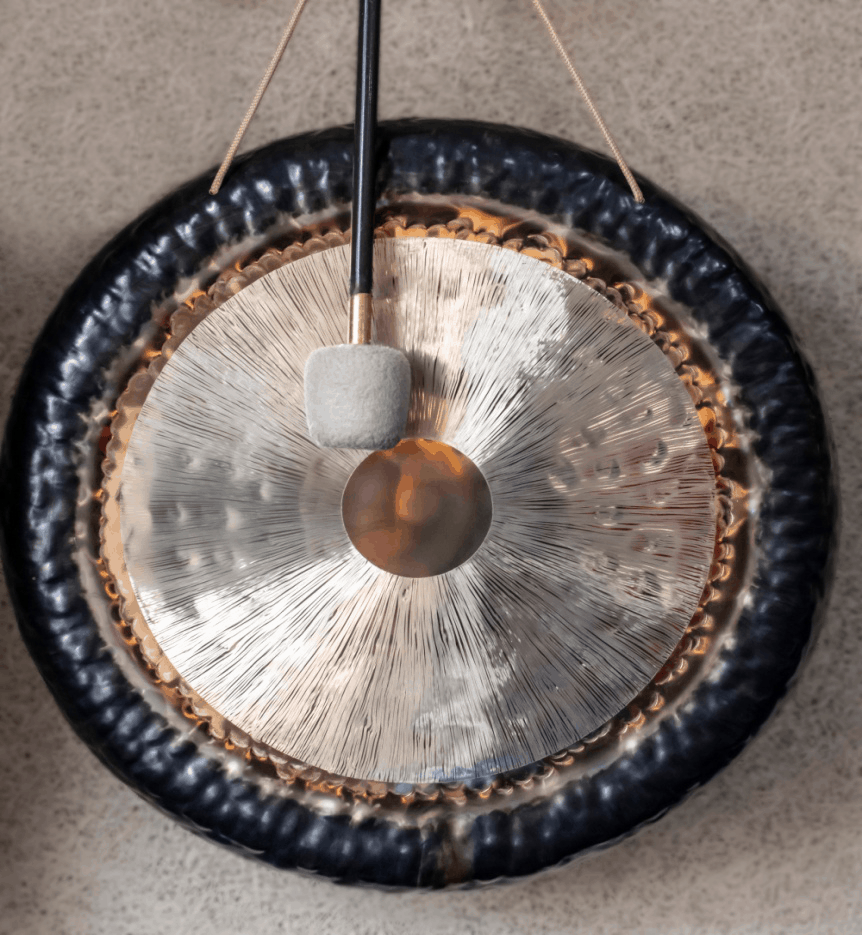 Gong drums are used to produce loud sounds with low pitches. In an orchestral percussion, drummers use these drums to produce a low, resonant sound.

The drumhead can be loosened to get rid of any sense of pitch in the sound or tightened to produce timpani-like notes.

So, this was a list of popular drums used in an orchestra. How many of these did you already know of?

In modern orchestral percussion, players use different combinations of these drums with other percussion instruments to produce heartfelt musical pieces.

AMAZING Triplets Exercises For The DRUMS