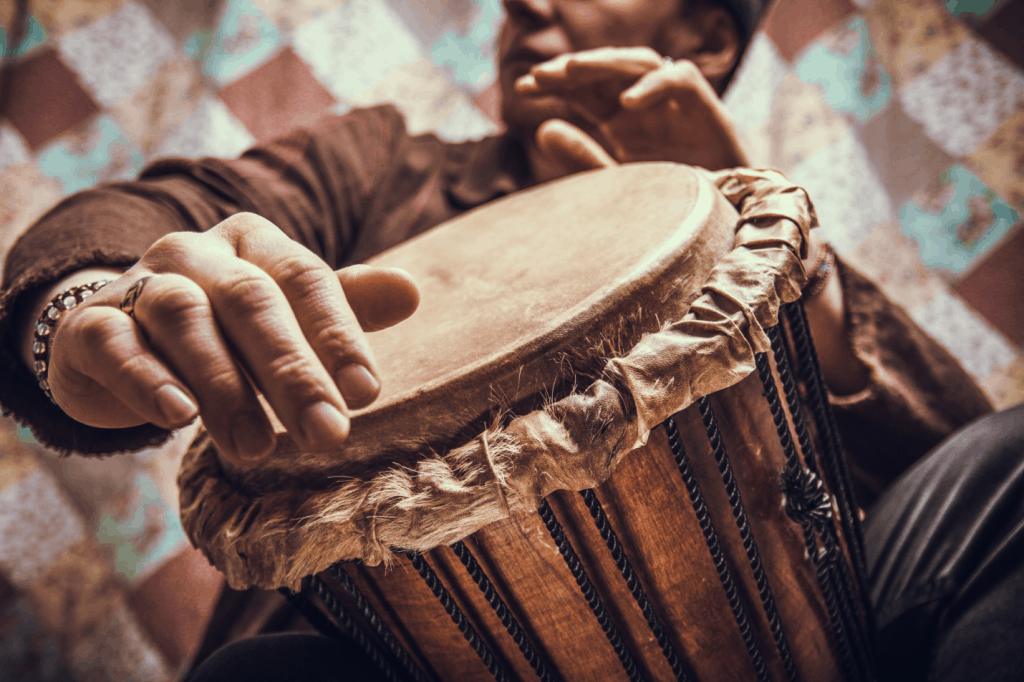 If we look at the history of traditional music, we’ll see that people belonging to a wide range of tribes have been using drums as an important instrument to produce enchanting music.

It didn’t take too long for drums to become a staple of folk music. Today, many different types of drums are being used to give folk music a unique touch.

Here’s a list of common drums used in folk music.

The dhol is a kind of drum with a double-sided barrel used mostly in India, Pakistan, and Bangladesh.

Played in different forms of folk music, its size tends to vary from region to region. It is typically made of wood but other materials can also be used, including steel, plastic, and fiberglass. 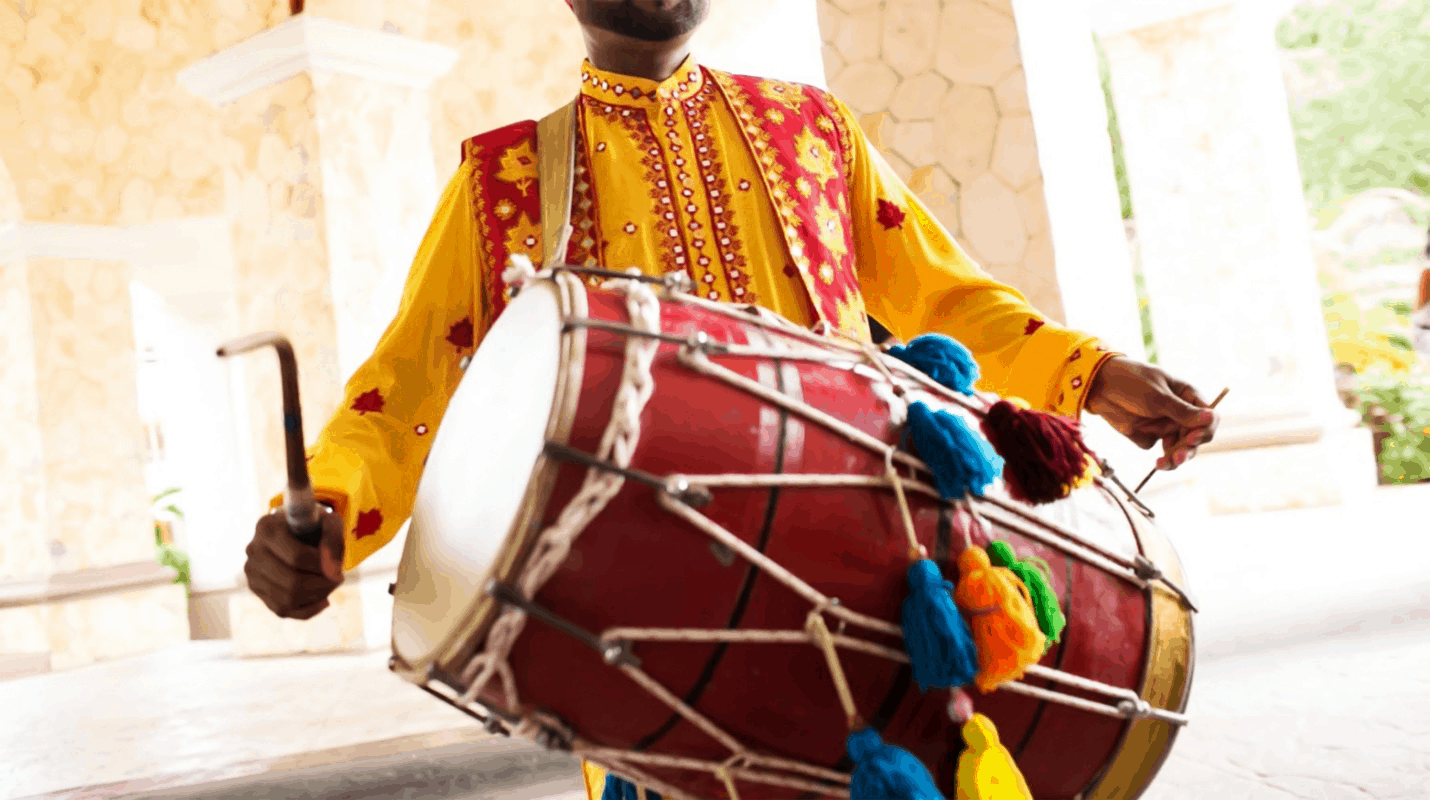 Drummers use two wooden, bamboo, or cane sticks to beat the dhol. The stick used to hit the bass side of the dhol is called ‘dagga’.

It is generally thicker and is bent in a quarter circular arc. The other stick, called the ‘tihli,’ is thinner and more flexible to play the higher endnote of the dhol.

Drummers usually sling the dhol over their shoulders or sometimes around their neck. Frequently, we see the wooden surface of the barrel decorated with colorful paints and engraved patterns.

This traditional Argentine drum is made using a hollowed tree trunk. It has a covering of cured skins of animals, such as sheep, goats, and cows.

The Bombo Legüero looks like the old European military drums and features a similar arrangement of hoops, loops, and leather thongs for tightening the drumheads.

The body of this drum is made of a hollow wooden log that is scraped and chiseled from the inside. It produces a deep and dark sound because of the fur that is left on the hide.

Drummers hang this drum at their side, draping one arm over it to play it from both above and the front. A mallet with a soft head or a stick is used to hit the drumhead and the wooden rim alternatively to produce the desired sound.

A djembe is a goblet drum played using bare hands. It is covered with animal skin and tied with ropes. The body is usually carved of hardwood and the drumhead is made of rawhide of goatskin.

The diameter of djembe typically ranges from 13-14 inches with an average height of 23-25 inches. The weight of the drum depends on the size and material of the shell. 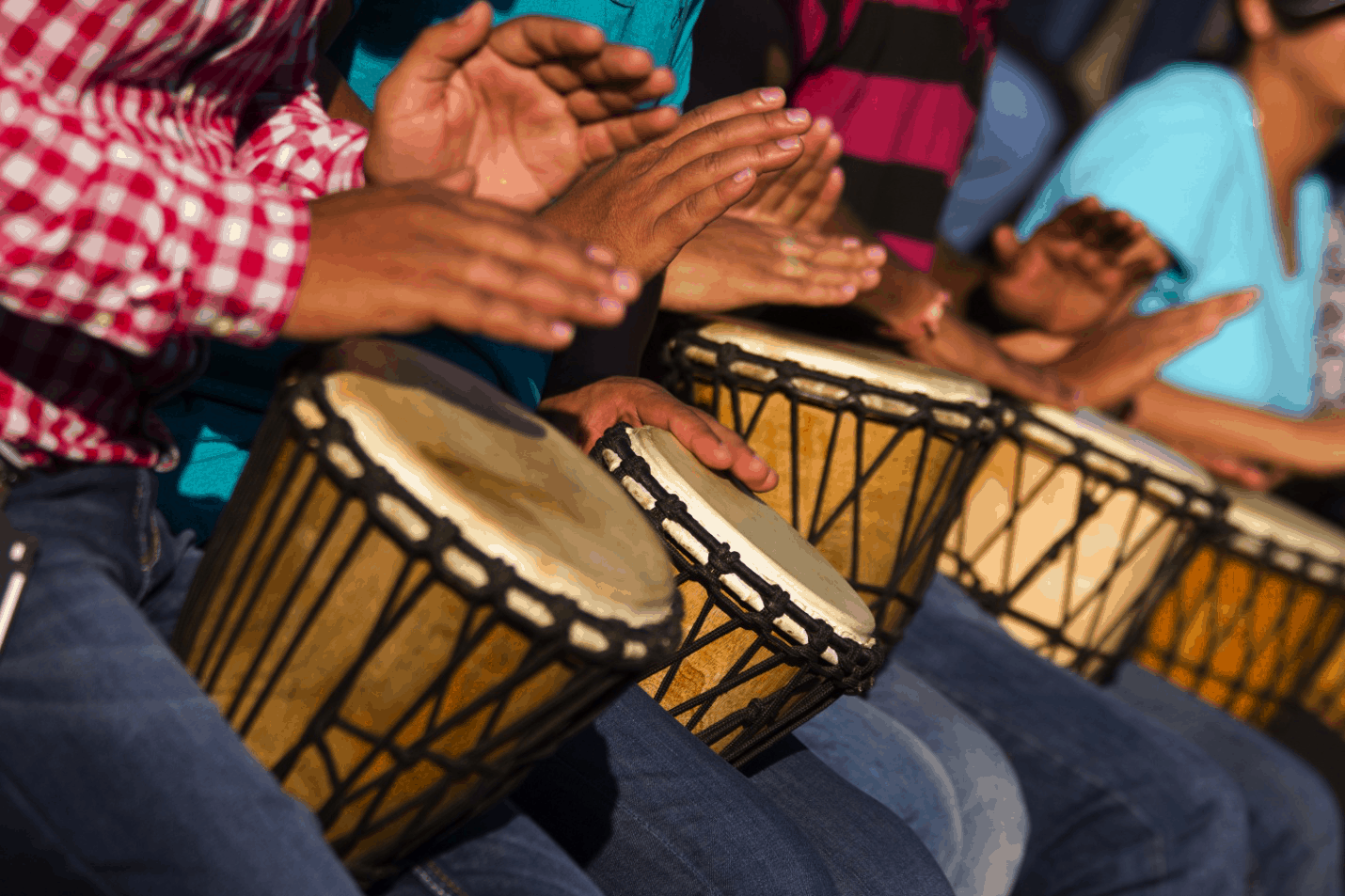 Producing a variety of sounds, the djembe is a highly versatile instrument widely used in folk music. It produces a sound loud enough to be easily heard over a large percussion ensemble.

This may sound surprising considering the size of the drum. The sound produced tends to increase with rising skin tension.

Typically, the djembe is used to produce three basic sounds: bass with a low pitch, tone with a medium pitch, and slap with a high pitch.

Drummers produce variations in the pitch by using different striking techniques to focus on specific vibration modes of the drumhead.

Traditionally, most djembe players are men. Even today, it’s a rare sight to see women playing djembe in West Africa.

The Kpanlogo is a type of drum that has its origins in Ghana, West Africa.

It’s commonly associated with Kpanlogo music where a group of drummers plays a set of six Kpanlogo drums of different sizes.

In folk music, people often this drum in combination with djembe, cowbell, and dunun to produce interesting sounds.

Also known as Brazilian timbal, the Timbau is a folk percussion instrument derived from caxambu drum, which is usually hit with both hands.

The Timbau has a slight cone-like shape and it comes in various sizes. Made of lacquered wood or aluminum, this drum is quite light in weight. Its head is usually made of tunable nylon.

The Timbau is used to produce loud sounds, usually with rapid phrases and powerful slaps. Not only can it be used to produce a clear, well-defined sound but also a deep, bass-focused sound.

This drum typically comes in varying lengths. The ones with increased lengths tend to produce deeper bass.

The Bodhran is an Irish drum with a diameter ranging from 10-26 inches. The size of the drum is usually somewhere in between 14-18 inches.

One side of the drumhead is covered with goatskin while the other side is left open for the player’s hand to be placed against the drum’s inside for controlling the timbre and pitch. 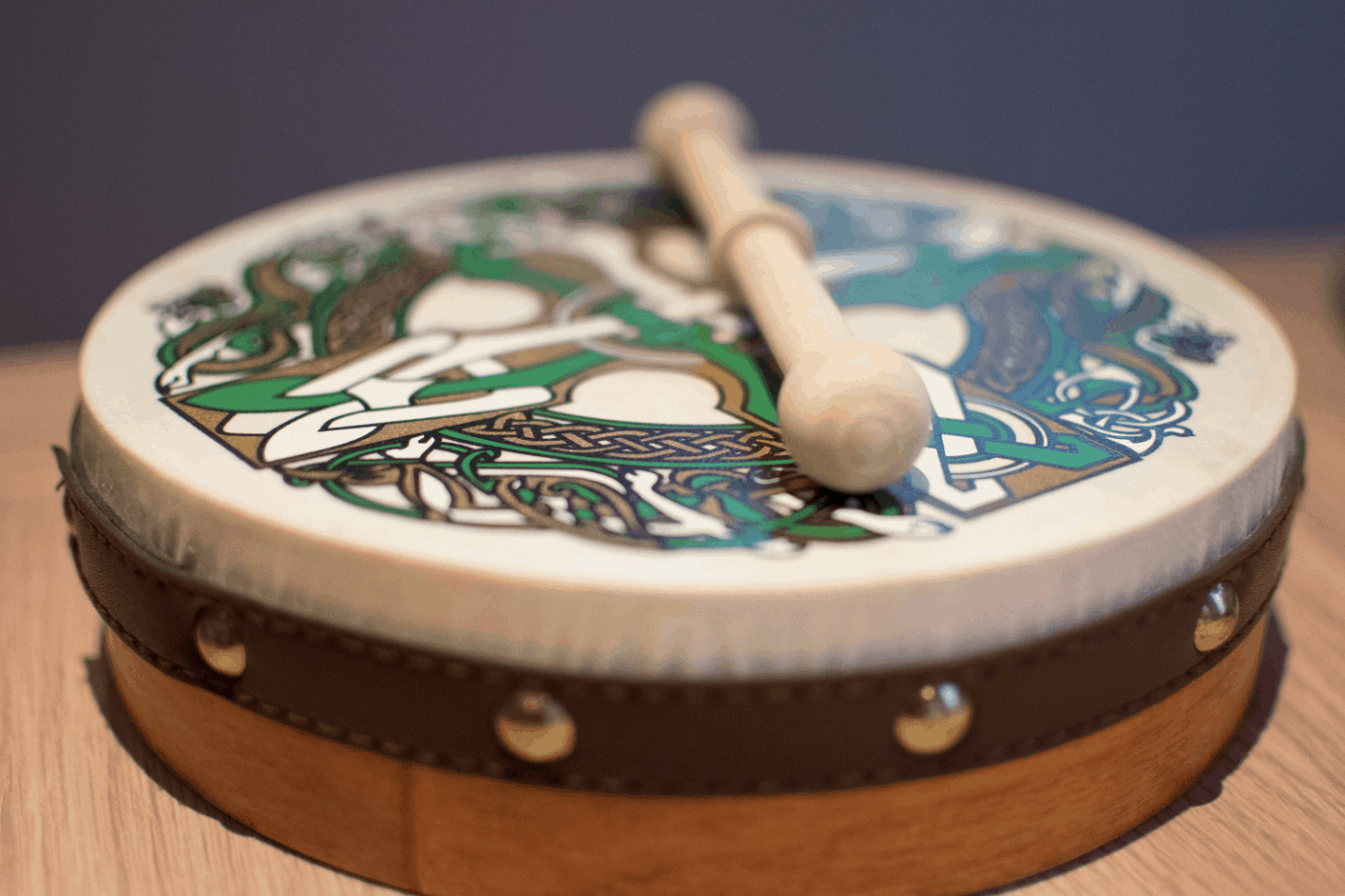 Based on the atmospheric conditions, the skin of the Bodhran is tightened or loosened using a hex key.

This frame drum is one of the most common drums played across the Middle East and Northern Africa. It is struck with a bare hand or a piece of wood called a beater.

Drummers usually play the Bodhran while sitting, holding it vertically on their thigh and supporting it with their upper arm or body.

The hand placed on the inside of the drum is used to apply various levels of pressure to produce different sounds.

Tonbak is one of the most popular drums used in folk music. It is a goblet drum with one head of 28 cm in diameter.

The drum shell is made from a block of wood, often decorated with a geometric pattern or design of diamonds, flutes, and spirals. This makes the Tonbak a relatively expensive drum.

The body of the Tonbak is such that the bottom part of the shell is thicker than the top. The cylindrical throat connects the top body to the hollow base.

For the drumhead, goat or sheep skin is attached with glue, stacks, or both.

The wide opening at the top allows the drum to produce full bass and treble tones. Drummers often heat, cool, dry, or dampen the membrane to achieve the desired pitch. They also exert some finger pressure to raise the pitch.

These are some of the most common types of drums used in folk music. Which one of these are you hearing about for the first time?