8 Popular Types of Drums Used across the World - *Drum Roll* 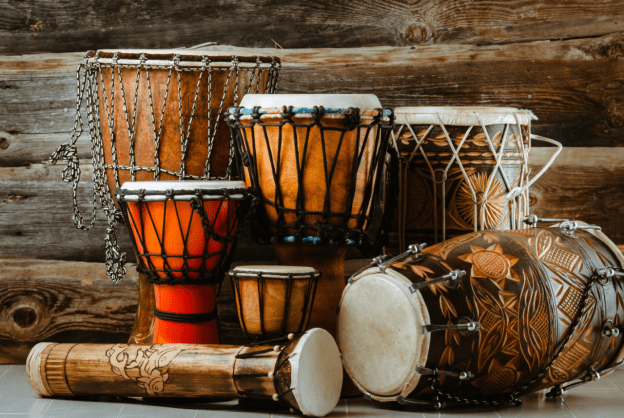 I love learning about different drums that are used across the world. Rhythm is so innate to the human animal that basically every culture has created certain drums to express it. Over the years I’ve become fascinated with how different peoples have made drums, not to mention the rhythmic language that comes with it.

Here’s a list of different types of drums used across the world.

What is a drum? For the physics of a drum to work there are a couple different variables. The instrument generally needs to be hollow, so air can pass through (moving the sound waves to your ear holes!).

Hand drums are perhaps the most common category that requires fingers or hands to play the instrument. Frame drums like the tambourine, on the other hand, are stretched skin spread across a round wooden frame. Other drums require mallets or drumsticks to produce a sound.

Let’s get into the details of some popular types of drums used across the world.

This drum is cool. It’s a classic Afro-Cuban drum popularly played in sub-Saharan Africa and throughout the Americas. In Cuba, people play it during carnivals and parades. Something about this drum ignites a fire of rhythmic passion and energy.

These drums are carved in Nigeria and Ghana and are made of hardwood with a goatskin hide. They are typically shaped like a cylinder with its head on the wide side. They are drums without bottom heads, meaning there is no soft surface on the bottom which would make the resonate more. However these drums still sound loud as hell.

Played with hands and tuned with ropes, the Ashiko drum produces sounds that irresistibly danceable.

Also known as ‘tumbadora’, the conga is a tall and narrow drum with one head. People traditionally use this drum in Afro-Cuban genres, such as rumba and conga.

However, they’ve become quite popular in other genres as well, including Latin rock, salsa, songo, and descarga. 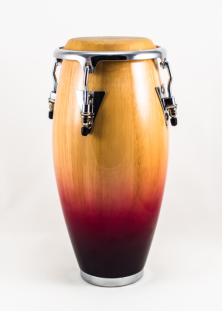 This goblet drum is covered with a skin tuned with rope. Originally, it belongs to West Africa and is played by using bare hands.

The body of Djembe is carved with hardwood while its head is made of untreated rawhide. It is perhaps the most versatile type of drum, as it can produce a number of musical sounds.

The sound it produces is loud enough to be heard clearly in a noisy crowd amidst different percussion.

Quite interestingly, the djembe drum is generally played by men in West Africa.

A Basler drum is a rope-tension drum with two heads. This drum is famous from the Carnival of Basel where over 2000 drummers play this instrument.

The drummers usually wear this drum over their right shoulder with a sling and it goes down to their left hip.

The Basler drum is popularly used in Switzerland during church festivals, concerts, carnival parades, ceremonies, and other public events.

The tabla is a popular drum associated with Indian cultures. Many of the Indian classical musical pieces involve the tabla.

The tabla requires the drummers to sit down and play a pair of drums with their fingers and hands.

The larger drum is known as ‘bayan’, which is used to provide bass tunes while the smaller one called ‘dayan’ is for tuning the pitch between high and low.

The heads of both tabla drums are made of double goatskins and the body itself is rounded.

The playing surface is covered with a black patch made with rice paste and iron. Strikes to the patch produce distinctive sounds. 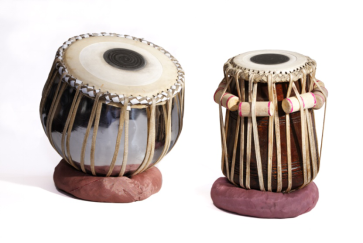 The Bodhran is an Irish drum that falls into the category of frame drums. With its roots possibly in Africa or Spain, this drum is made of hide stretched over a circular, wooden frame. 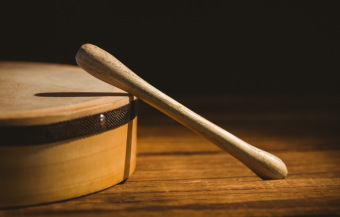 The drummers use mallets to strike the playing surface to produce great sounds. It is typically considered as a ceremonial drum and this is the reason why you may often find it painted red.

In addition to being included in percussion ensembles, this drum is played in Chinese orchestras, festive processions, and Hindu or Buddhist temple ensembles.

Most of us are aware of the big drum that drummers use to kick in rock or pop—however across the world this drum was used in different ways and in different musical styles.

We have written an entire article on the different types of bass drums that are used all over the world.

Some examples of this are the Surdo from Brazil,  tabalers from Catalunya in Spain, and 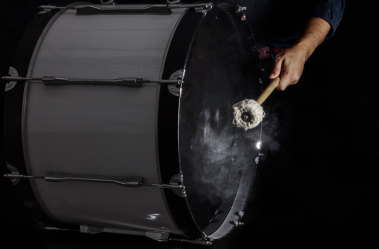 This list only scratches the surface of types of drums the world has to offer us.

Check out our other lists on the drums of Egypt, the drums of Brazil, and the drums of India for a more in-depth look in how drummers across the world interpret the beautiful gift of rhythm.