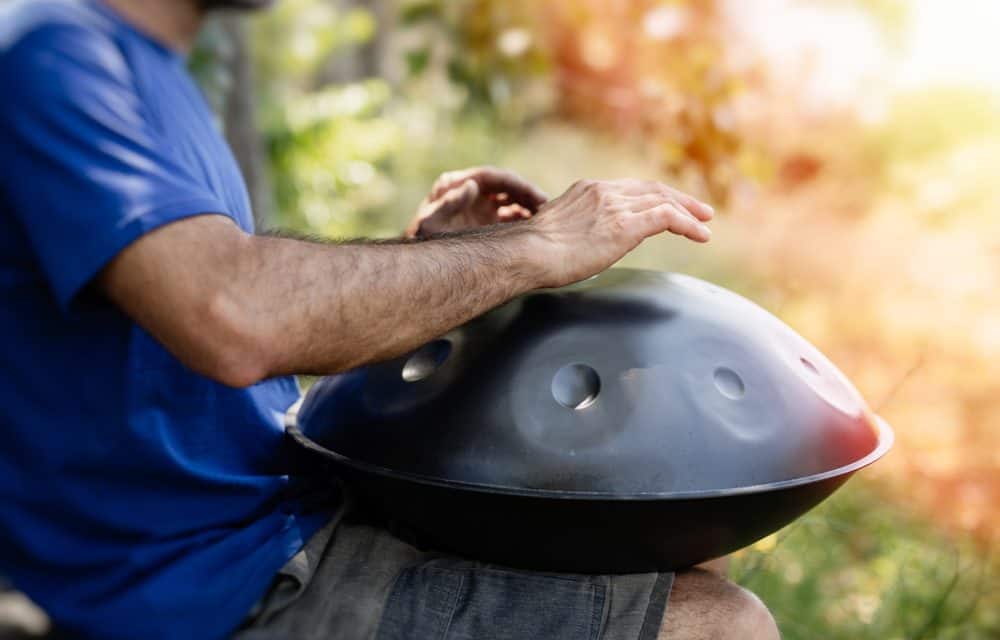 Hand drums are magical. There is something about the hand slapping the skin of a drum that  satisfies and dazzles us to the core, whether we are musicians or spectators. But how many drums are we aware of besides those funny bongos our crazy uncles sometimes pull out? Let’s dive into the interesting history of some drums of which you may not be as hip to. 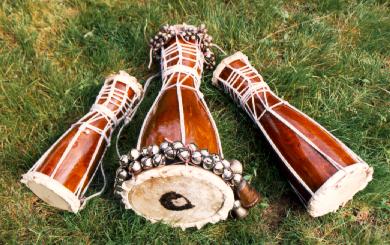 Batá drums come from the land of Yorúba in Nigeria and they were brought over to Cuba in the 1800s during the slave trade. These drums are deeply integrated with the Yorúba culture and the Santería religion that the people celebrated.

These drums are traditionally played in groups of three as each has a drum that is tuned slightly different. Each of these drums is shaped like an hourglass and have bottom heads. So instead of playing them upright, like many other traditional drums, you place them horizontally on your lap and play both sides.

The largest drum is called the Iya, the middle the Itótele and the smallest one Okónkolo. Since you are able to hit both sides, the two heads have different pitches. The higher one is called the chachá and the other is called the inu or the mouth.

I remember when I was studying with a teacher, we spent a couple months studying these drums—listening to and transcribing their patterns and even adapting them to drumset. The rhythms were generally in a 12/8 time signature and highly syncopated.

Check out this video if you want to hear some of these rhythms in action. Below is a link to buy the album.

Support us and the artist by buying the album on the Amazon link. 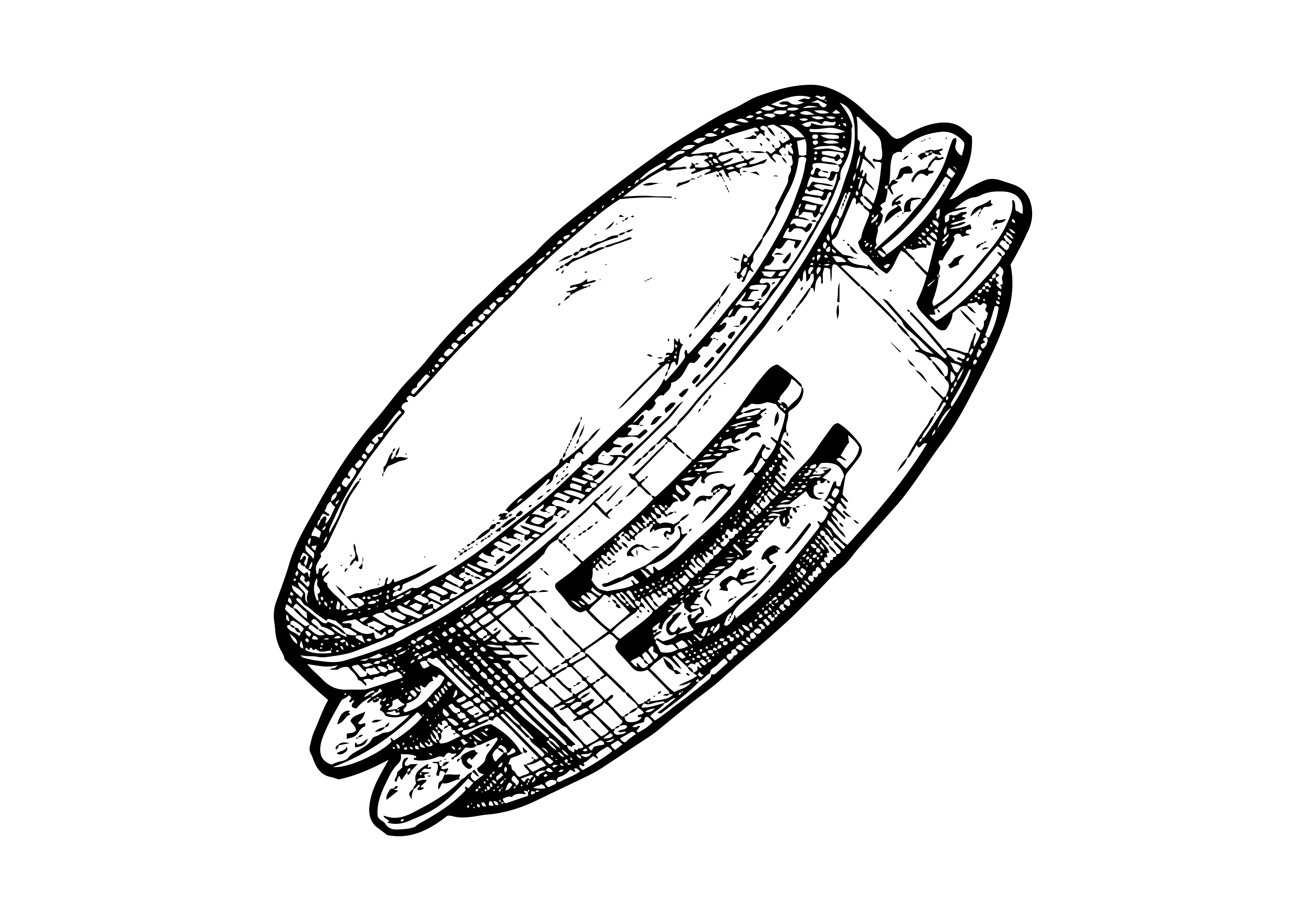 The riq is the tambourine of the middle east. It’s found in many countries such as Turkey, Egypt, Syria and many more. What is so cool about this instrument is how many subtle sounds you can get out of it.

The range of high and low sounds is immense for such a small tambourine-like instrument. The combination of hits and jingles allows it to be a solitary rhythm section and accompany Oud players, vocalists, saz players, etc.

These are some of my favorite instruments to watch experts play, because the instrument is so small, portable and unsuspecting, yet they generate a huge variety of sounds and rhythmic diversity. Seriously, just watch this. 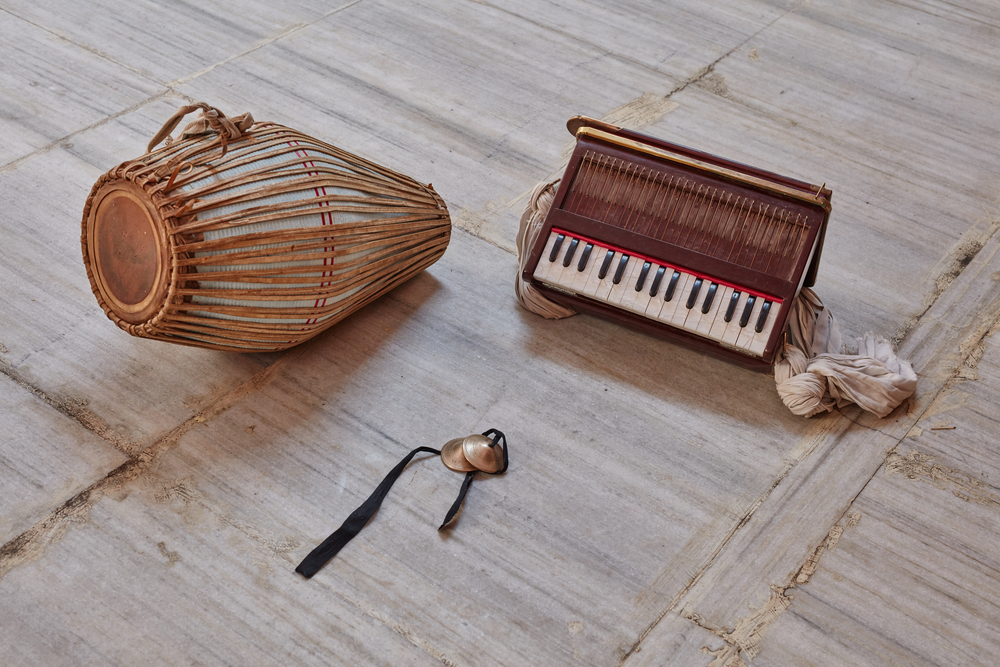 Many are aware of the infamous Indian tabla, but may be less aware of the Mridanga, an instrument carved out of the trunk of a jackfruit tree and is among the oldest traditional drums of the country.

The way of playing this drum is similar to that of the batá drums—it sits across the lap and you play each head with a combination of muted and open tones. This drum is normally played in a hypnotic, vocally driven indian classical music called carnatic. 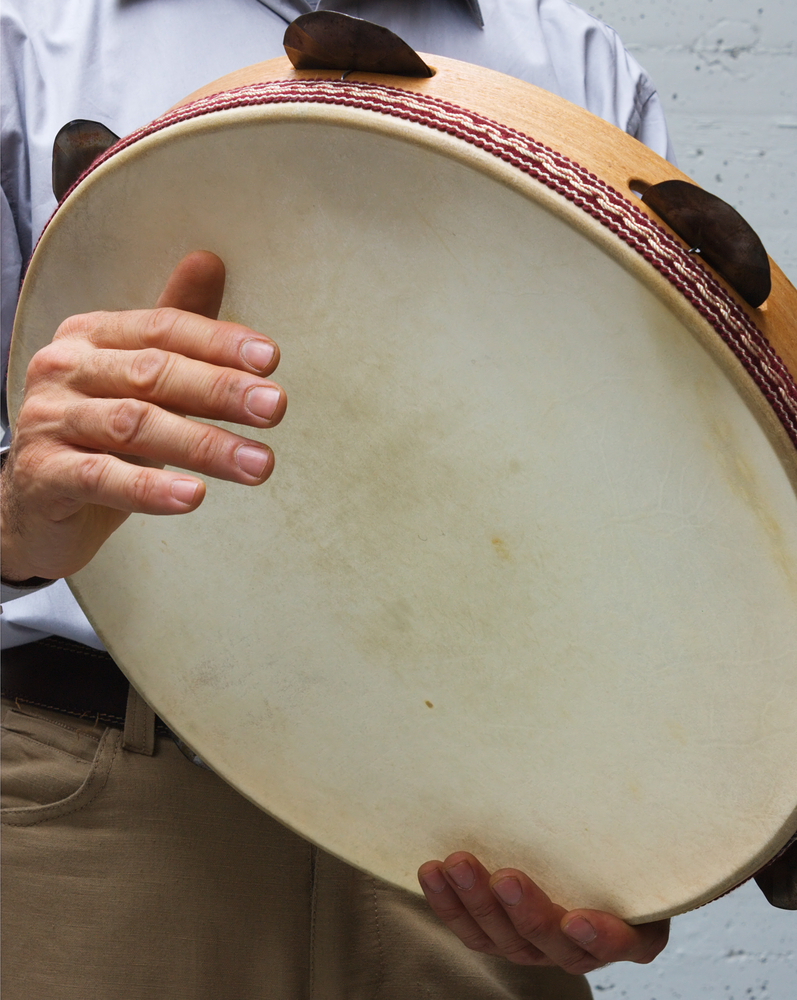 The bendir is a big wooden frame drum that is played in Turkey as well as many North African communities. The technique is similar to the Riq drums, and some bendirs come with jingles or even snare wires to give them a different sound.

However a typical bendir has a diameter around 16” to 20” with an open back. This open back drum (a drum without a bottom head) allows the player to grasp the frame. The drums are hit in the middle for a low deep sound and towards the edges to modulate the pitch and get a high tapping sound.

These drums are used in Turkish and Persian folk music and similar style drums can be found in Morocco and Iran. These drums are usually meant to accompany melodic instruments such as the Oud. 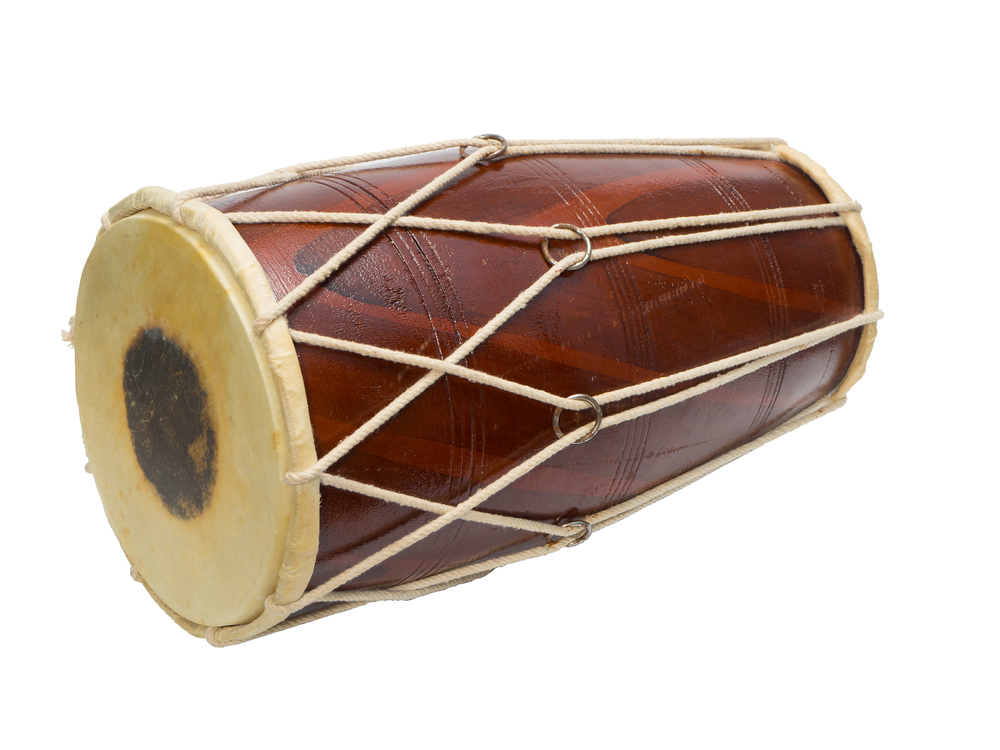 Coming back to Southern Asia we find ourselves with the Dholak drum. This is again a barrel shaped drum, however is not quite as sophisticated as the Mridanga or the Tabla in that it’s playing techniques and tuning are not as developed.

Nevertheless, it is a popular drum that does not cease to be apart of many musical situations. Although it is played primarily in India, it has spread to other parts of Asia, Africa and the Carribbean.

In addition to being played on one’s lap, many musicians sling the drum over their shoulders and it is used in many festivals or pre-wedding ceremonies (and in Pakistan actual wedding ceremonies).

What about hand drums you can sit on?

The cajon is a drum, originally from Peru, but can be found in traditional music of many cultures. The story goes that origin of the Cajon, meaning box in Spanish, began when slaves that were brought from Africa, and they would use shipping crates and wooden boxes to conserve the rhythms of their culture.

Today it is used in the Afro-Peruvian música criolla, Spanish flamenco, and cajones de rumba in Cuba.

For this reason the rhythms played on this instrument can vary depending on the style of music in which it is found.

We can even see modern players hooking these instruments up to triggers to merge the acoustic with the electronic. Here is a cajon player imitating electronic music (still with an acoustic drum).

What about hand drums you can play melodies on? 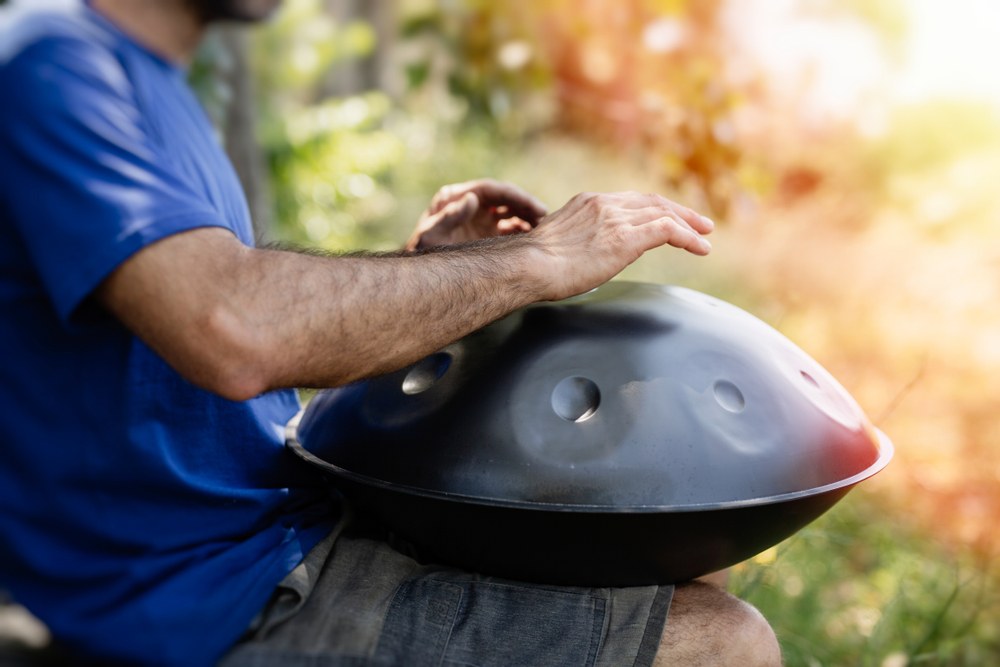 Handpans are two half metal shells that have been glued together, and have different surfaces on the top that are tuned to specific notes. Usually these drums are tuned to have a very open sound, musically speaking. Sometimes just the root, and fifth with overtones; sometimes a pentatonic octave. However there are many tunings available.

These drums were first designed and manufactured by the company PanArt in Switzerland, but due to worldwide interest and other companies manufacturing their version, handpans are now the general name to a class of instruments.

The spacey, metallic, reverberating sounds these instruments make are not only very hypnotic to the spectator, but are really satisfying to play. Even for a beginner, the visceral sensation of hitting metal and creating melodies is electric. 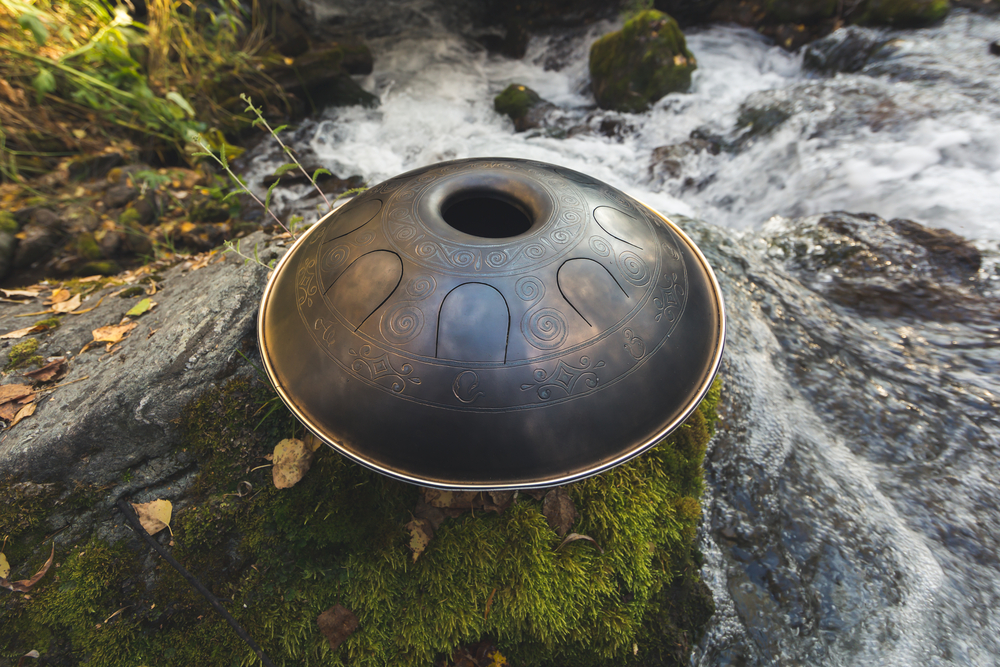 After the handpan came a charge of other metallic melodic drums on the market. One of the most famous was the tongue drum, first made by the company Zenko in France.

Like the handpans, these drums take advantage of the completely metal surface to launch long and lush notes that reverberate throughout the entire metallic structure. The tongue drums however, have flap like surfaces that you hit the drum on, differing slightly from the indented tone field structures that are in the PanArt’s drum.