During his induction into the Rock and Roll Hall of Fame, the original guitarist of a British new wave group discloses his illness in a letter that is read by his bandmates

The band made the announcement at their induction into the Rock and Roll Hall of Fame, which Andy Taylor was unable to attend due to continuing treatment for stage 4 metastatic prostate cancer.

At the Hall of Fame event at the Microsoft Theater in Los Angeles, the legendary British new wave band disclosed Taylor had been diagnosed four years before while presenting a letter from him to the crowd.

Taylor was scheduled to rejoin with his old bandmates, vocalist Simon Le Bon, pianist Nick Rhodes, bassist John Taylor, and drummer Roger Taylor, but they cancelled the event after learning that Taylor had suffered a setback that prevented him from flying from Ibiza to Los Angeles.

The five-piece Birmingham band had not performed as a unit since 2004 when they last went on tour and released the album Astronaut. The ceremony was to be their first performance as a unit in 17 years.

The trio took the stage to perform their 1981 breakout song Girls On Film as the first act honored at the event on Saturday. Before addressing Taylor's absence, they performed a performance that featured Hungry Like the Wolf and Ordinary World. 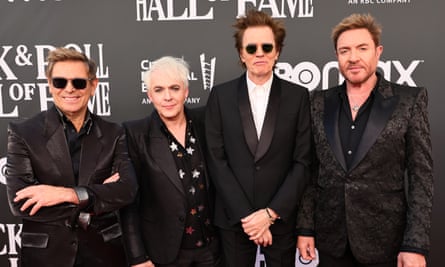 Taylor stated: "I was given a stage 4 metastatic prostate cancer diagnosis little over four years ago. I speak from the standpoint of a family guy, but with deep respect toward the band, the finest fans a group could have, and this incredible honor. Many families have endured the slow burn of this cancer, and of course we are no different.

“I have the ‘Rodgers and Edwards’ of doctors and medical treatment that until very recently allowed me to just rock on. Although my current condition is not immediately life-threatening there is no cure.”

Nile Rodgers and Bernard Edwards, the pop producers and founders of Chic, who collaborated with Duran Duran throughout their career, are referred to as Rodgers and Edwards.

In spite of the extraordinary efforts of Taylor's team, Taylor continued, "Recently I was doing OK after some very sophisticated life-extending treatment, that was until a week or so ago when I suffered a setback, and I had to be honest in that both physically and mentally, I would be pushing my boundaries."

“However, none of this needs to or should detract from what this band (with or without me) has achieved and sustained for 44 years.”

Taylor went on to say that although he was "very proud of these four brothers" and "overjoyed" they were receiving this honor, he was "truly sorry and massively disappointed" he could not attend the event. He even mentioned that he had purchased a new guitar for the occasion.

“I often doubted the day would come. I’m sure as hell glad I’m around to see the day,” he added.

With singles like Rio, Wild Boys, and the Bond theme A View to a Kill, Duran Duran, one of the greatest artists of the 1980s, was founded in Birmingham in 1978. They are not related, the three Taylors.

After releasing their 15th studio album, Future Past, last year and embarking on a 40th anniversary celebration tour, which included headlining the British Summer Time event in London's Hyde Park this year, the group has lately gained popularity once again.

They also appeared at the Commonwealth Games opening ceremony in Birmingham and the Queen's Platinum Jubilee performance at Buckingham Palace.

This week saw the publication of the documentary A Hollywood High, which was about their most recent rooftop performance at The Aster hotel in Los Angeles. The package also includes interviews and archival material that details the band's unique connection to the American metropolis.

On November 7, 2022, the article's main picture underwent a change. In a previous edition, a picture identified as being of Andy Taylor really belonged to his bandmate John Taylor.

Thanks to Press Association at The Guardian whose reporting provided the original basis for this story.