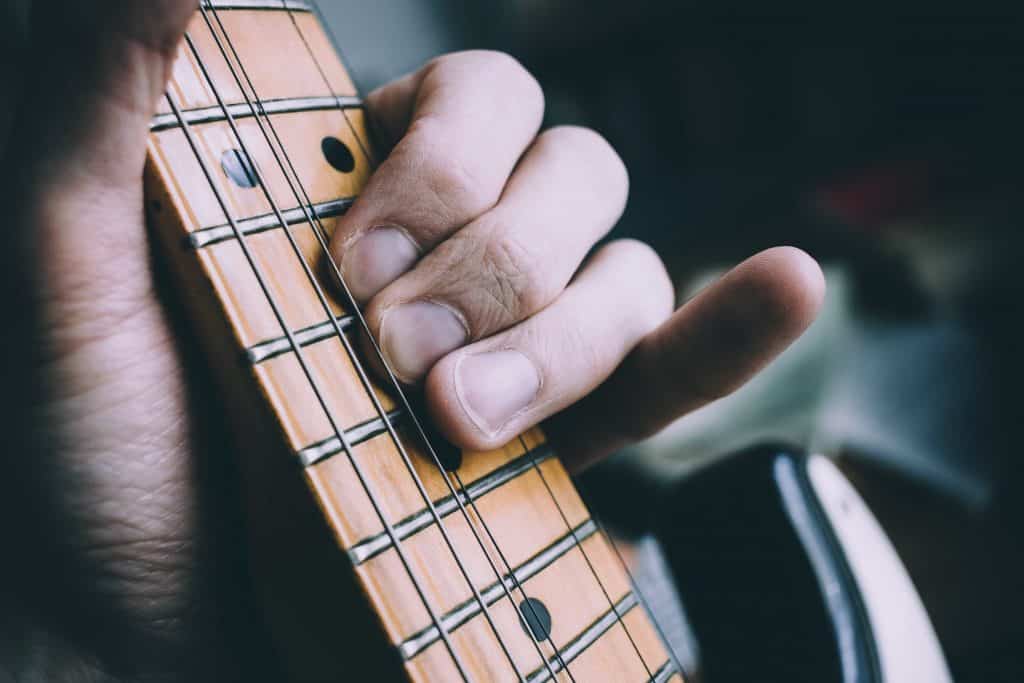 Have you always wanted to learn how to play guitar? Fortunately, although learning to play the guitar requires some work in the beginning, once you have the basics down you can play millions of songs and have a lot of fun.

The first step in sounding competent at guitar will be to learn some basic chords.

Let's learn some basic chords and their finger placement.

A note about finger placement

Instead, we want to place our fingers almost touching the fret which is closest to your other hand.

For example, the guy below is playing a note with his ring finger. We can see that he is almost hugging the fret closest to his right hand. This is how we get the note to ring out or sustain itself. 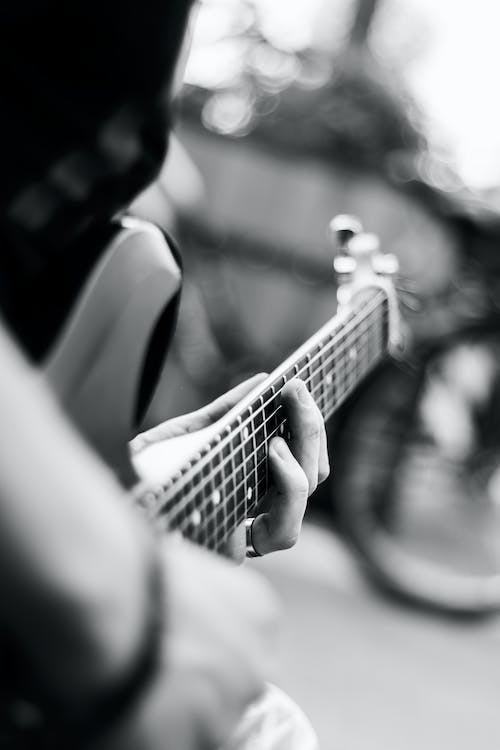 Let's dive into it and learn our first chord.

This chord is called a G major. We call it a major chord because it sounds 'happy' for lack of a better term.

This chart shows that on the top string of the guitar (the lowest sounding string) we place our middle finger on the 3rd fret.

Then we place our index finger on the 2nd fret of the next string down.

Lastly, we will take our pinky finger and put it on the 3rd fret of the bottom string (the highest sounding string).

Now we will want to strum all of the strings together. Start with the top and strum all the way down to the bottom.

This is a G major chord!

Next let's learn another chord that may be slightly trickier, but hopefully not too much.

This chord is a C major chord. If we were learning piano this would probably be the first chord shown to you, since it is the simplest chord to do on a piano.

Here is the finger placement.

On the 3rd fret of the second string down from the lowest string—we actually call this the 5th string, since the highest string is the 1st string—we will place our ring finger.

On the 2nd fret of the 4th string we will place our middle finger.

On the 1st fret of the 2nd string we will place our index finger.

The tricky part will be to strum all of these strings starting with the 5th string. So we don't include the first string.

Next, let's learn an F major chord. The finger placement for this guitar chord is very similar to the C major chord

Here is the finger placement for the F major chord.

On the 3rd fret of the 4th string we will place our ring finger.

On the 2nd fret of the 3rd string we will place our middle finger.

On the 1st fret of the 2nd string we will place our index finger.

Again, the tricky part will be to strum all of these strings starting with the 4th string. We are skipping the first two strings and only starting on the beginning of the chord.

Putting these chords together

Now although we can play the chords separately, the most difficult part is transitioning between the chords.

So let's try this.

If you can manage this, you are playing your first song! The song is La Bamba by Richie Valens.

In the actual song, Richie switches chords pretty quickly, however if you practice a little bit every day you will get it in no time!

Other songs with these same chords

The beautiful thing about learning guitar chords is that you can play so many songs with just a few chords.

With just the G major chord and the C major chord, you can play most of the song 'Love Me Do' by the Beatles.

It alternates between a G major and a C major chord.

However for the 'bridge' of this song you just need to learn one more chord.

Here is the finger placement for the D major chord.

On the 2nd fret of the 3rd string we will place our index finger.

On the 3rd fret of the 2nd string we will place our ring finger.

On the 1st fret of the 1st string we will place our middle finger.

Practice along to Love Me Do and you can get these chord changes down solid, especially between the C major and G major.

The last chord I want to show you for this lesson is the E minor chord.

If you feel overwhelmed don't worry, as this is the easiest chord we will learn today. The finger placement is as follows.

On the 2nd fret of the 5th string we will place our middle finger.

On the 2nd fret of the 4th string we will place our ring finger.

Then we strum all the strings! All of the strings form a part in this chord, so you start with the top and strum down to the bottom.

You should notice that the sound of this chord is more somber than the other chords we've learned—this illustrates the difference between major and minor.

One more song to go out on

Let's pick a song that utilizes most of the chords we've learned. The song Stand By Me by Ben E. King utilizes the chords: G major, E minor, C major, D major, in this order.

First just practice cycling between these chords. Then listen to the song and see if you can pick out which chords go where.

If you are still having trouble figuring out where the chords go, I've posted a link to a guitar tutorial below.

I want to stress, however, that before you look up guitar tutorials, you should really make an effort to use your ear to help you find out where the chords should go.

It is really important to learn how to use your ears to follow along as it will train you to be able to learn songs without help from tutorials.

Even if you only spend a little bit of time on it before you have to look up the tutorial, every minute of trying to learn by ear will make a difference in the long run.