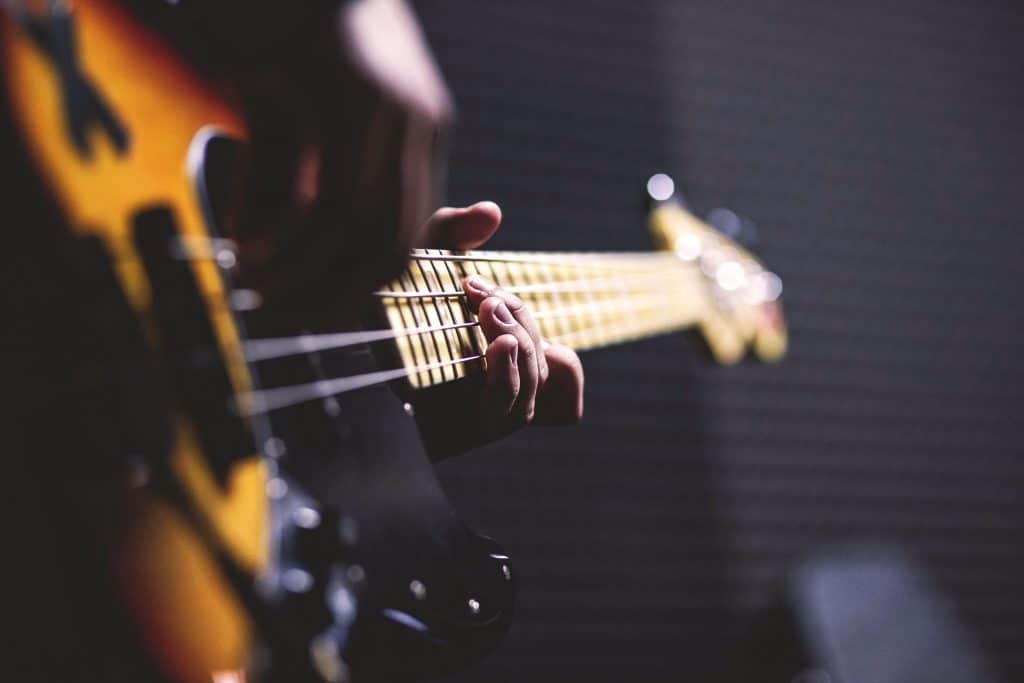 When it comes to acquiring a new skill, there is no quick or easy way to do it. A musical instrument is the same, it takes a lot of patience and practice to get the movements under your fingers.

Fortunately, learning a musical instrument is exponential. What do I mean? I mean that every piece of knowledge you learn will make it increasingly easier to learn the next.

The bass guitar is an amazingly underrated instrument. Most people are attracted to guitar or vocals or even drums before the bass guitar.

However, the bass is essential for almost every band. It is the glue that attaches the melody to the rhythm.

An average person may not realize the bass is even playing, but once it stops the room comes to a halt. That is the bass guitar's power.

Let's take a look at some songs that we can learn for bass guitar. One important thing to always try to do is to learn the song by ear first, and then look up the tablature later to check your playing.

Queen - Another One Bites the Dust

This is a great song to begin practicing on bass guitar. This song only has 2 parts.

The key to this song is getting the rhythm super-tight, and it is a great chance to practice playing fingerstyle on bass as opposed to with a pick.

Before you go to look up tabs for the song, try to sit down with the bass and learn it by ear.

I'll give you a hint, the main riff is played entirely on the low E string.

Once you've done that you can check yourself with the video below.

Practice makes perfect, but only if you practice perfectly!

So keep going at it until it feels right. And when you're ready, move on to the next song!

Around the same skill level is the song Seven Nation Army by the White Stripes. The song consists of a main riff that is repeated for the majority of the song except for a few key transitions.

The main riff is composed of two slightly different rhythmic variations. The key here will be to nail down the rhythm.

Try to listen and learn the riff without looking at the tablature. We call this ear training.

Like the previous song, this song can all be played on the first E string.

Okay, once you've tried to learn it without help, check your version against the tablature.

How correct were you? Were there things you were missing?

Let's keep going and see if we can get a little more complicated.

Cream - Sunshine of Your Love

This is another classic that is pretty easy to learn for bass guitar.

We have an intro that is slightly different from the main riff. Then we have the main riff, which consists of a riff and moving that same riff down to create a bluesy change.

Then we have a chorus which is only three notes.

This song is a great song to jam out to because it is relatively long and very packed with 60s jamming.

Again, practice listening to this song and trying to figure out the notes before looking up the tablature.

This song will be slightly trickier than the white stripes song since the guitar and the bass are not playing exactly the same thing.

The main riff should be easy enough to spot and sing along to, the tricky part will be to separate what the guitar is doing from what the bass is doing.

Okay once you've tried all you can compare your efforts to the tablature version.

There are a couple ways to play the main riff on the guitar so if your version isn't in the same exact position as this guy's, don't worry!

This is a great song to learn on bass guitar since the notes are relatively simple and repetitive the whole time. The tricky part will be getting the rhythm solid for each individual part since although the notes are the same, the rhythm is different.

Remember to do your ear training before checking out the tabs.

This is the best way of testing yourself since in real-life musical situations your ear will be way more useful than memorizing which finger goes on which fret.

This a great song for learning bass because it makes you skip strings which is a very important component of being a bass guitarist.

Melodically it is not very complicated, however rhythmically it has some tricks.

Most notably, it contains playing dead strings with your hand. This means that your right hand is playing the string but your left hand isn't placed on any string and is giving a muted type of sound.

Even if you can't get the entire bassline on your own, remember to really make an effort with this step before you move on to looking up the tablature.

Ear training is probably one of the most important aspects of being a musician, so even if you can only learn a couple of notes this way, it is always important to put in a significant amount of time trying.

Also, once you've learned the song via tablature, go back and make sure that this is correct.

Don't believe everything you see on the internet 🙂

We need to trust our ears overall and go back to the original recording whenever possible to check ourselves.