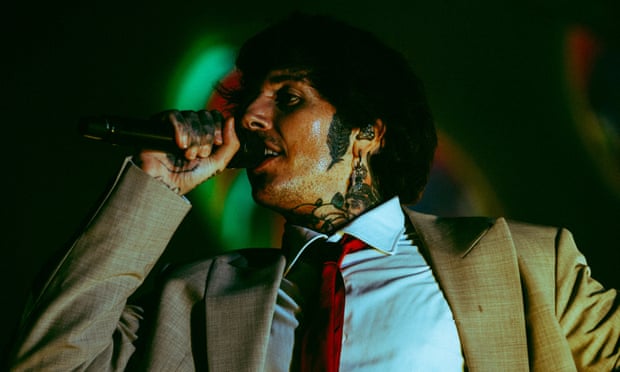 Oli Sykes yells, "I haven't seen a mosh pit in 18 fucking months, so you better make it good." Bring Me the Horizon's latest UK stadium tour has begun, and the band's vocalist seems to be overjoyed to be back in the heart of things.

The Sheffield quintet's concert in Hull tonight, the first of the Post Human tour, is their first in the East Riding of Yorkshire in well over a decade. Much has happened in that time: they've gone from rough-and-ready deathcore possibilities to a sleek, pop-metal hit machine with two Grammy nominations, two UK No 1 albums — first Amo in 2018 and then Post Human: Survival Horror last year – and conquered America.

The band's live show is wacky and often borders on cliché, but it's hard not to be enthralled by this stunning clash of polished pop and scorching metal.

Shadow Moses' doomy soundscapes and walls of jagged guitars have the arena's foundations trembling with enormous, whirling circular pits while thousands of voices shout back at the band, in another gaming reference to Konami classic Metal Gear Solid. DiE4u, a brand new song that has more in common with Ed Sheeran than Slipknot, has only been out for 100 hours, but that doesn't matter: its live premiere is met with enthusiastic fists in the air.

It's not all fire and brimstone. A teary-eyed crowd is hanging on Sykes' every word in a stripped-down version of Follow You, in which keyboardist Jordan Fish and guitarist Lee Malia take center stage alongside the singer.

He even advises someone in the front row to hold off on the tears so as not to irritate him. He adds, "You have no idea how much we've missed this."

The sheer spectacle is the most striking aspect. The spectacular graphics and state-of-the-art strobe lighting are enough of a sensory assault on their own, but Sykes is accompanied by a couple of dancers throughout the majority of the night.

They're dressed as half cheerleader, part Doctor Who Cybermen, replete with pompoms, for Happy Song.

The allusions to the epidemic are numerous, but mainly as lighthearted acknowledgments of the previous 18 months. The band's calling card these days is combining electronic elements with nu-bravado, metal's and Parasite Eve is a strong example that takes aim at Cummings et al: “When all the king's sources and friends don't know their pathogens from their arses.”

The dancers are now dressed in hazmat suits, and Sykes asks Hull, “Who got Covid?”

The gradual, confident ascent of Bring Me the Horizon portends many more years in rock's top echelons. The band's average age is just 34, despite eight studio albums. And, given Malia's statement to this newspaper in 2013 that they would "never sell out arenas," those expectations need to be revised.

Stadiums, after all, aren't out of the question. Bring Me the Horizon is, and has been, the country's top rock act for quite some time.

Thanks to Chris Lord at The Guardian whose reporting provided the original basis for this story.