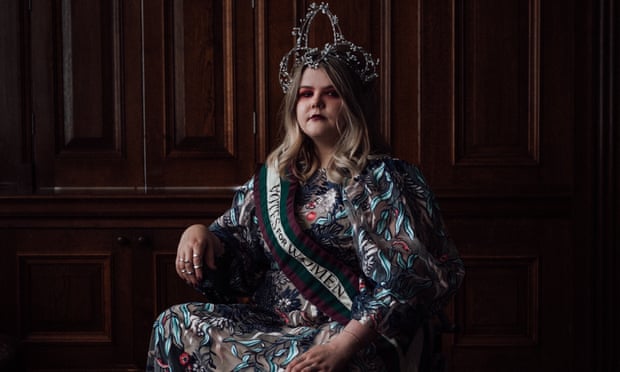 Dandy, a Shropshire-based alternative pop performer, has every right to be enraged. She claims that an abusive relationship in her early twenties rendered her impotent, while the deaths of thousands of fellow handicapped people as a result of the benefits system has filled her with anguish and hatred.

Dandy explains on a Zoom chat that, despite her insightful lyrics, writing thus bluntly didn't come easily to her. “Anger is an emotion I had to learn to feel and channel creatively or productively. That, I believe, is a major issue for many individuals, especially handicapped people."

Her ability to find her own voice has gained her a devoted audience. She has 15,000 Instagram followers, and she uses the platform to publish her own frank and funny drawings based on remarks she's weary of seeing and hearing as a lesbian, handicapped young person. In person, she has the same attitude, laughing at her own candor.

"We feel we don't have the right to be as angry as we should be," she continues, "that we should sit back and be the good disabled people who are truly grateful for the handouts." "It makes me so angry because all of the disabled people I know are wonderful, incredible people." We need them because they provide so much life to the world, and we're frequently relegated to being a 'burden.'"

Dandy's evocative piano tunes, which were inspired by her "lifelong hero" Kate Bush, recently drew BBC Introducing's attention. She's hoping her music reaches a wider audience, fueled by the fact that no well-known artists signed to a big label use a wheelchair.

A poll by arts access organisation Attitude Is Everything (AIE) showed that two-thirds of working handicapped musicians have sacrificed their health or welfare to play live; 70% claimed they had suppressed information about their health condition owing to stigma and worries about professional relationships. Those who have revealed access needs say they are often disregarded or dismissed.

"Attitudinal barriers are frequently encountered by artists and musicians with chronic illnesses, which stem from a lack of understanding about what it's like to manage a health condition day in and day out," explains AIE artist development manager Rich Legate. "They are blind to the planning, rest, and well-being strategies."

Dandy's life abruptly halted when he was diagnosed with myalgic encephalomyelitis (ME) in 2018. It gave the artist, who had previously been reticent, a newfound feeling of resolve. "I honestly believe that if I hadn't become disabled, I would have spent the rest of my life struggling with my self-confidence," she acknowledges. "It took me a long time to gain confidence in a wheelchair, with people staring at me and interrogating me while I was trying to buy bog roll."

She claims she stopped caring what other people thought after spending 18 months in bed. "When you peel away everything, you ask yourself, 'OK, what is genuinely essential to me?' And then there was music and art."

Dandy was inspired by Bush, Tori Amos, and Pink Floyd's The Wall when she began composing songs following her diagnosis. She describes the latter as "so politicized." "There's so much reflection on society and its ills, and it's done in such a clever way that people can interpret it in so many different ways," she says.

The Cycle's creation faced its own set of difficulties. Dandy explains, "Rather than focusing on one song at a time, I did a lot of flitting between." “Another thing my ME has caused is that I've lost my rhythm, which I didn't think was something you could lose.

I assumed it was a natural trait that you either had or didn't, but mine is awful.” As part of a creative process she documented on Instagram, she methodically banged down percussion beats on GarageBand.

Dandy claims she attempted to get notice for her songs by contacting industry insiders, but was faced with a "wall of nothingness." It turned out to be helpful, she claims, since it led her to produce work that is completely true to her voice. I inquire as to what has prevented previous artists from achieving popular success. "First and foremost," she explains, "it's accessibility."

According to a 2019 AIE study, music venues regularly fail to offer proper accessibility and services. Disabled and chronically sick artists have complained they are still unable to perform at shows and festivals after the Covid-19 limitations were lifted, allowing live music and theatre to resume. She continues, "We can't get into studios, we can't get into venues, we can't get into all of these places where we need to produce our music."

"I think labels perceive it as a risk," she explains, "and there are no other examples of it." Dandy, on the other hand, isn't backing down with her "angry album." "I realized how important [rage] is and how many people need to hear it. I hope that after listening to [the album], people realize that those are valid feelings to experience when horrible things happen to them."

Thanks to Liam O'Dell at The Guardian whose reporting provided the original basis for this story.