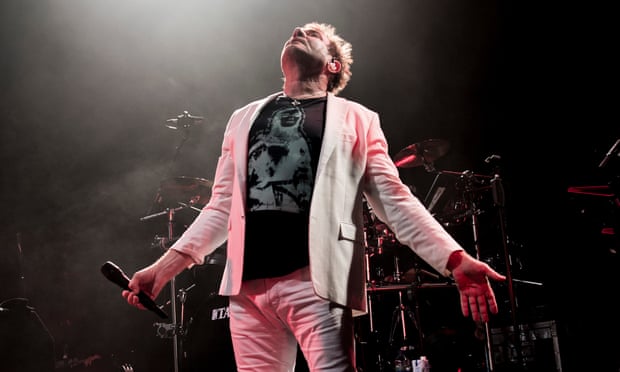 Simon Le Bon shouts, "Number two in Birmingham!" as he kicks off a second sold-out home town performance at the 1,500-capacity Institute. The far more intimate setting than Duran's usual stadiums provides a sense of what it must have been like to see them when they were the resident band at the Rum Runner club four decades ago, with people packed in like sardines, epidemic or no pandemic, with the band practically in their faces.

The occasion is to promote next month's new album Future Past, from which tonight's opener Invisible is from, ahead of larger concerts. When the band is almost drowned out by 1,500 shouting, middle-aged Durannies, the gloomy funk song about a battle to be heard in today's society is well demonstrated.

Duran have returned to the road, ravenous as wolves and in ridiculously in shape for guys in their early 60s, after a two-year hiatus due to Covid. John Taylor, a grin on his face, seems to have resisted the ravages of time.

Nick Rhodes, the black-clad blond keyboardist, still has Andy Warhol's New Romantic appearance. Le Bon may have gained a few pounds while in captivity, but a few evenings like this will quickly shed those pounds — the stage-starved singer seems to be enjoying the time of his life.

He enjoys pulling out his repertoire of stage maneuvers, which range from singing to specific people of the front row to flawlessly performed 360-degree twirls.

Le Bon, who had been sleeping rough all night, suddenly takes on the mock-aristocratic tone of an old-school English actor. He teases, dramatically, "I'm not going to say that in 1982 we became the biggest band in the world."

There are two additional new tracks on the album. Anniversary combines a bassline reminiscent of Frankie's Two Tribes with a Duran chorus. Even though Tonight United was just broadcast for the first time the night before, Le Bon dares the crowd to sing it, which they do.

Other than that, Planet Earth raises the roof and View to a Kill brings the Bond theme to a tiny Birmingham room, but the career-spanning setlist goes well beyond those copper-bottomed 80s classics. Friends of Mine is the great DD hit that never was: profoundly New Romantic and techno, yet with a chorus as huge as any of them.

As the frontman notes, 1993’s exquisite Ordinary World “takes on a new relevance” with the epidemic (“I won’t cry for yesterday, there’s an ordinary world, somehow I have to find”), and its audience chorus makes for a genuine goosebump moment.

Everyone's arms are raised in response to (Reach Up for the) Sunrise from 2004. The band even throws in their widely mocked rendition of Melle Mel's White Lines (Don't Do It) — the "just say no" of middle-aged white rock groups attempting rap – and sends it so far over the top that it takes down the house.

In the 1980s, Girls on Film makes a conscious reference to Calvin Harris's Acceptable. The Wild Boys and Rio cruise down the home straight with the roar and elegance of a high-end sports car, while the crowd screams along with its heroes for the last time.

Duran Duran may no longer be the world's largest band after what Le Bon calls "40 amazing years," but after all this time and at such close quarters, it's clear why they were.