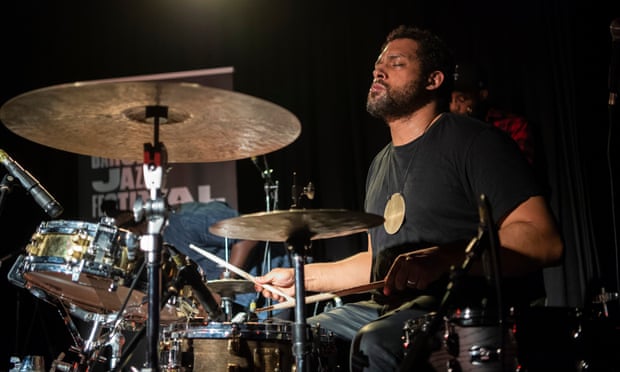 Every day, we have so many options to make, and we're continuously improvising them, much like in jazz," explains Makaya McCraven, a drummer and composer. "Even when we try to order and sanitize the world so that we can function, we're improvising in various frameworks." It's all a way of expressing existence."

McCraven, 38, is bursting with enthusiasm as he speaks from his basement home studio in Chicago, wearing a black T-shirt printed with the motto "Listen more" – as if directing his interviewer. His wife yells down from upstairs that she has his lunch while he philosophizes on his unique technique of composition — improvising while playing live and then slicing up the following recordings to create a patchwork of samples.

"One second," he says as he moves his gaze away from the camera. "I'm doing an interview with an international newspaper!" he exclaims, a sneaky grin on his face. "As you can see, I'm always improvising."

In 2007, McCraven relocated to Chicago from western Massachusetts. "I was following love," he explains, "since my wife got a job here at Northwestern University."

It was a wise decision: his wife, Nitasha Tamar Sharma, is now a professor of African American and Asian American studies at the university, while McCraven has spent the last decade establishing himself as one of jazz's most distinctive voices, pioneering his technique with a group of local collaborators to create a sound that straddles instrumental improvisation and the hip-hop mentality of splicing samples.

As a consequence, he's released a string of highly lauded albums, including In the Moment in 2015, Universal Beings in 2018, and We're New Again in 2020, a reinterpretation of Gil Scott-last Heron's album I'm New Here. This cut-and-paste method achieves a pinnacle on his current album, Deciphering the Message, which also marks his first time on the Blue Note label, which has previously released albums by Miles Davis, John Coltrane, and Herbie Hancock. McCraven was granted carte blanche to use his producing approach to re-contextualize sounds from the Blue Note library.

McCraven discusses how he views his style as a continuation of tradition rather than a deviation from the standard, speaking in ever-branching tangents as if following the improvisatory lines of a solo. "Sampling is a game of the future and the past," he explains.

"I want to pay tribute to the music we came from, and there's already a lot of sampling in jazz's history." On separate songs, you'll hear identical intros or people trading licks and playing the same concepts. They used to interact with the music in the same way that sampling does, but now we're simply relying on technology."

As a result, Deciphering the Message examines the melodic parallels and legacies of these licks through the lens of drummer Horace Silver, leader of the Jazz Messengers, a talent incubator who saw saxophonist Hank Mobley, trumpeter Kenny Dorham, and guitarist Kenny Burrell pass through his circle. McCraven turns Mobley's A Slice of the Top into a boom-bap opener, slipping a rhythmic shuffle under Burrell's languorous variations, and transforming Dorham's Whistle Stop into a sludgy funk.

"I wanted to emphasize the familial aspect of this music; I've always admired how a band of musicians can become a community and influence an entire scene or period of time," he explains. "So many musicians are deeply connected to one another; they cut their teeth together, and when the younger guys come in, they also help them up."

McCraven is used to the ancestral communality of the jazz scene, having been born in Paris to musical parents - his mother is a Hungarian folk performer and his father is a drummer who performed with John Coltrane associate Archie Shepp.

"There was an extended musical family," he says, laughing, "where a lot of different cats would pop in and out at home for jam sessions and stuff that probably shouldn't be going on around a kid." "These musicians were pushing the envelope, and guys like Archie Shepp taught me about this music's oral tradition: how it's more about culture than texts."

McCraven got his start playing with rock bands, reggae ensembles, jazzers, and wedding bands in the Massachusetts college towns of Amherst and Northampton. "I was just trying to keep busy," he adds, "playing as much as I could, self-recording and experimenting." "I've always believed that if you do the right thing for the music, the music will do the right thing for you," she says.

From younger British artists like Mercury Prize-nominated saxophonist Nubya Garcia to fellow Chicagoans Junius Paul and Ben LaMar Gay, his open-eared mentality has led him to a diverse array of colleagues. "I only want to make music with people I feel comfortable being vulnerable with and trusting," McCraven explains.

"You create this magic of bringing people together, especially when we're playing live, and it's something that produces real emotion." It's something we're desperate for."

McCraven has been lured to London in recent years by the vibrancy of the live scene. "This music is defined by young musicians; it's kids like Lee Morgan or Herbie Hancock who were 19 or 20 years old when they shaped the sound," he explains. The sight of young artists like Garcia and saxophonist Shabaka Hutchings on stage, performing for their peers, piqued his interest.

"There was no mention of gatekeeping or adhering to tradition." People seemed to understand that evolution is a part of the heritage. And only when people travel and exchange ideas does culture grow."

McCraven's slogan is that progress is inextricably linked to the art form, which is one of the reasons jazz is so difficult to pin down as a singular thing. Is it the underlying "message" on this record that he's attempting to figure out?

"I wouldn't be asking you to figure it out by listening if I knew what it was," he jokes. "All I want to do is pay tribute to this music, whether it's improvised music, Black American music, or whatever you want to call it." I'm not reinventing the wheel; instead, I'm learning how it works and applying what I've learned to make a statement that will last."