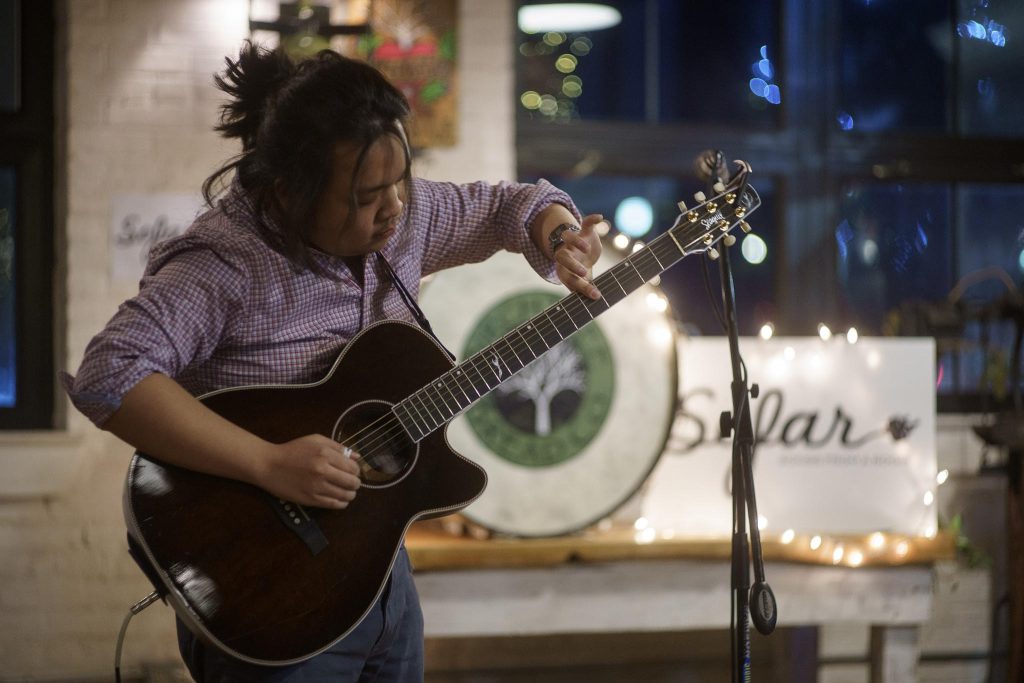 Bingfan 'Jason' Ji is a powerhouse guitarist and singer-songwriter, and his passion for sharing music from a huge range of genres and styles has kept him busy, to say the least.

Ji has been a part of so many notable performances through the years, including a performance for the major broadcast program China's Got Talent (where all four judges awarded him "Yes" votes) and shows at Agganis Arena, Perth Concert Hall, and the Berklee Performance Center.

He was also chosen to participate in the Concert for One series, played multiple shows for Sofar Sounds, and worked as the lead guitarist and music director for an award-winning short film titled So It Goes.

Oh yeah, and he's also an officially endorsed artist for Seagull & Godin Guitars. I know, it's a lot, and there's much, much more to cover. Thankfully, we spoke with Ji himself to learn more about his career and specifically his relationship with the guitar, both as an instrument and as a tool for intricate and varied musical expression.

Jam Addict (JA): What model was your first guitar? And do you still have it?

Jason Ji (BJ): My first guitar was a black and white off-brand Stratocaster that I bought off the internet. I was 10 years old and knew nothing about music or the guitar, and I didn’t even know you needed an amplifier for an electric guitar to be heard. I played with the volume knob on the guitar over and over and kept wondering why it didn’t make my guitar louder!

Unfortunately, I don’t have that guitar anymore, as I gave it away to one of my students when I acquired better gear.

JA: Do you think guitarists who currently don’t play fingerstyle should consider at least trying it for themselves?

BJ: Absolutely! Fingerstyle playing can be incorporated into every genre and it can add a whole new dimension to your guitar playing. Definitely start by doing some “boom-chick” Chet Atkins-style playing, learning some of the classics such as Windy & Warm. Before attempting your own fingerstyle arrangement, it is crucial to know the lyrics of every melody line and understand its meaning in order to create arrangements that reflect those sentiments.

Anyway, the short answer is, if you’re not playing at least some fingerstyle, you’re missing out on releasing the full potential of a guitar.

JA: You’ve played at a great number of prestigious venues, which ones were your favorite?

BJ: That’s a hard question! One of my favorites would be the performance at the Perth Concert Hall, where I performed the piece “The Hunt” by Tommy Emmanuel with an orchestra backing me up. I reached out to Tommy and he managed to get me the original orchestral score for the piece with the help of arranger Sean O’Boyle. It was an amazing experience because Perth Concert Hall has one of the best acoustic responses in Australia and it seats roughly 1,700 people. Combined with the blessing of the original orchestral scores, I was truly in tone heaven.

I also enjoyed performing for Clark University’s events, and once at Harvard Art Museum, once at the Museum of Fine Arts in Boston. Both of these are some of the best art museums in the country, and of course, music surrounded by incredible art from all around the world is intoxicating.

Another incredibly unique event I played for was one in an unusual setting: playing inside a shipping container! Celebrity Series hosted a free-to-attend concert series called “Concert For One” where musicians were to perform to one person at a time for one minute each. It was incredible to see folks’ reactions when they got this special one-on-one intimate musical experience, which made it a very memorable event.

Lastly, I very much enjoy performing with Sofar Sounds. Sofar stands for Songs From A Room, hosting concerts in over 400 cities around the world. They are intimate concerts that have hosted major performers such as Billie Eilish, FINNEAS, Ed Sheeran, Hozier, Yebba, and many others. I have so far played one sold-out show in the Seaport District, and I played one in Worcester, MA. They have one of the most attentive crowds and the atmosphere is always so inviting and stress-free.

JA: On top of your many live performances, you've also worked on film music. What was your experience working on So It Goes like?

BJ: I was the lead guitarist and music director for the short film So It Goes. I was working with an Australian Director, Hudson Howes, going through it scene-to-scene, but the actual writing and recording of the music took no more than a couple of days. The film went on to win Best LGBT Short Film at the Vesuvius International Film Festival in Campania, Italy, placed as a monthly finalist at the Changing Face International Film Festival, placed as a quarter-finalist at the Poco Film Festival in Victoria, Australia, as well as being an official selection in film festivals across Australia, the US, and Russia. I’m looking forward to more opportunities to score for films and movies.

JA: You’ve performed at Fenway Park. Can you tell us what it's like to be on stage at such as big venue?

BJ: Believe it or not, that was my first time at Fenway park, despite all the years I lived right next door! It was surreal to be right in front of the historic Green Monster when I had only ever seen it in photos. I was the section leader for the choir performance for Northeastern’s commencement concert. We sang the song “I Lived“ by OneRepublic.

Playing at such a big venue, it was actually pretty difficult to hear the tempo of the music as we did not have in-ear monitors for the performance. On top of that, there were fireworks going off at the end of the show. We didn't expect just how spectacularly loud it would be. We just had to stare at our music director’s arms as she conducted the tempo for us. However, in a way, the extra challenge just made it that much more invigorating of an experience. What an amazing show and an amazing group of musicians! I was truly honored to have performed at a venue of that caliber.

JA: Would you say your relationship with the guitar, as an instrument, has developed over time?

BJ: Picking up the guitar has always made me feel fulfilled. Over time, the guitar and I grew more connected and more in tune as I figured out how to express myself with every note on the fretboard. Before big performances, like the one at the Agganis Arena or China’s Got Talent, sometimes I would even talk to the guitar and express my gratitude for how they’ve helped me in my life’s journey.

When I’m down, playing the guitar for even a couple of minutes will almost always cheer me up. I have found the instrument to be not only an excellent way of expressing my identity and skills but also a wonderful source of support for my personal growth.