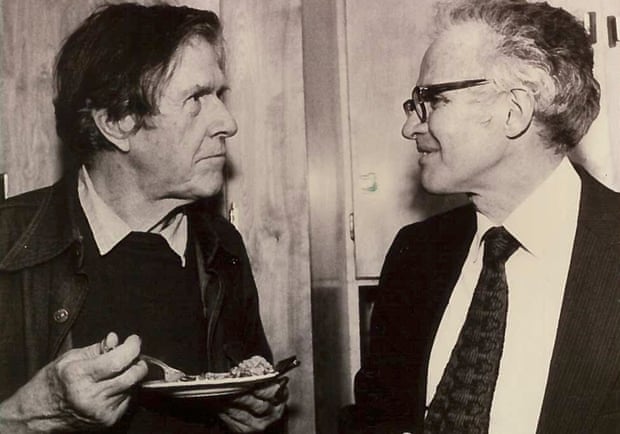 On the evening of August 9, 1956, a few hundred people crammed into a student union lounge at the University of Illinois Urbana-Champaign, some 130 miles northwest of Chicago, for a musical recital. The launch of the Illiac Suite: String Quartet No 4, composed by a member of the chemistry department, Lejaren Hiller Jr, using the school's one and only computer, the Illiac I, drew a large crowd.

Hiller's work, characterized by the New York Times in his 1994 obituary as "the first substantial piece of music composed on a computer" – and indeed by a machine – was decades before today's artificial intelligence pop stars, Auto-Tune and deepfake compositions.

George Andrix, a violist and composition student at the institution, was one of the four players that played the piece that night. Andrix, who is now 89, recalls a crowded auditorium of people "who showed up to see what this monster of a computer could do." The Illinois Automatic Computer, or Illiac I, was the first supercomputer to be housed by a university. "It would have been a source of great pride to see the computer used in this way," he adds.

The next day, a wire report released by the United Press painted the 15-minute program in a negative light. Hiller and his research partner Leonard M Isaacson "sponsored" the composition, which was described as "a suite composed by an electronic brain." The report said that "some people didn't dig the beat," citing an anonymous audience member who compared the music to a barnyard and another who concerned that "it does away with the need for human composers."

Hiller, the man principally responsible for the Illiac Suite, became a superstar overnight, with appearances in Time and Newsweek magazines. In 1983, he told an interviewer, "I went from total obscurity as a composer to really being on the front page of newspapers all over the country." "One week I was unknown, the next week I was well-known."

Hiller's phone was "ringing almost off the hook" following the performance, according to biographer James Matthew Bohn. "For 15 minutes, he was very famous," Bohn adds.

The Illiac Suite is mostly obscure outside of some classical, experimental, and academic circles 65 years later, although it was a historic first step toward the realm of computerisation and AI in music. At the time, computers weren't entirely unknown in the area.

Alan Turing, a British scientist, used laboratory equipment to capture the melodies to three songs, including God Save the King, in 1951. The Illiac I, on the other hand, was used to create the music for the Illiac Suite, with Hiller and Isaacson programming a series of computational possibilities into it.

This was the first time a computer has been used to produce music in this way. Others, including as John Cage, helped establish the basis in the early 1950s by experimenting with randomised composition approaches. Around the same time, Greek composer Iannis Xenakis devised a method he dubbed "stochastic music," in which he based his works on computer-generated mathematical formulae.

Hiller took it even farther. "[He] was setting up algorithms for the computer to make choices," his daughter, Amanda Hiller, who was born some years after the suite was finished, explains. "However, each of those algorithms represented a unique perspective on what musical outcomes could or should be."

Lejaren Hiller, a New York City native, has spent most of his life performing music. While at Princeton University, where he got his PhD in chemistry in 1947 at the age of 23, he studied composition under Milton Babbitt and Roger Sessions and played in student groups. One of Hiller's former pupils, Neely Bruce, notes, "He absolutely adored the standard [classical] repertory." Hiller worked for DuPont in Waynesboro, Virginia, after contributing to the war effort as a chemical researcher, before starting at Illinois in the autumn of 1952.

His arrival coincided with the unveiling of the Illiac I, which took up the majority of a room in September. Entering code on to paper tape and waiting for it to blurt data back out was a time-consuming operation; in the case of writing music, that data was subsequently transcribed by hand into musical annotation. "Only a few people were able to interact with it," Bohn explains. "Not even programmers were allowed to be in the same room with it." Hiller, on the other hand, was one of them.

Hiller started to consider how the algorithms may be applied to fundamental musical counterpoint exercises after working with the computer during synthetic rubber research. Babbitt urged him to go through with his plan. The four movements of the Illiac Suite were a sequence of increasingly difficult experiments that imitated several historical genres of classical music, from the Renaissance through Arnold Schoenberg's early 20th-century 12-tone serialism.

Only the first three segments were finished at the time of the debut. The only other live artist who performed that night was Sanford Reuning, who was the second violinist. "If you know what I mean," he explains, "it sounded like a first piece by a computer." "It wasn't anything out of the ordinary."

The fourth movement, completed in fall 1956, was a significant change for Hiller, who used Markov chains, a kind of probability mechanism in which the music is dependent only on the note that comes before it, with little or no possibility for the computer to memorize an overarching theme. The fourth movement bursts and percolates after the plunked strings and skittering, sawing melodies of the opening sections; it skips, stops, and begins, ratcheting up the tension until it arrives at a succession of dead ends and cliffhangers.

Hiller, committed to the integrity of his experiment, refused to modify anything the computer came up with, adding to the unpredictability. While a result, according to David Rosenboom, who played violin on a 1967 re-recording of the suite as a student at Illinois, it may seem uncomfortable and unnatural at points. He notes, "It's a difficult piece to play." "It requires technical skill, but there's a quirkiness to it that throws you off a little here and there as you jump around trying to play these big leaps," says the author.

In 1959, Hiller and Isaacson released Experimental Music: Composition using an Electronic Computer, a book detailing their study. The Chicago Tribune published a review that expressed popular uncertainty about whether a computer "can create music of lasting value or is an intriguing sidelight on the fascinating and rapidly growing science of automation."

Concerns about a computer takeover, which are still prevalent among composers today, were misplaced at the time, according to Amanda Hiller: "I certainly don't think he ever thought a computer could replace a person as a composer."

Hiller had moved from the chemistry department to the music department full-time by fall 1958, when he pioneered the creation of Illinois' Experimental Music Studio, only the second of its sort in the world after the Columbia-Princeton Electronic Music Center. Cage himself completed a residence at Illinois, where he collaborated closely with Hiller on HPSCHD, a seminal work that blended computer composition methods with I Ching-based decision-making.

In 1969, it had its world debut in a five-hour multimedia performance in a college auditorium that comprised 52 tape players and 64 slide projectors. (Bruce was one of the participants.) Hiller had gone to join the music faculty at the State University of New York in Buffalo the previous year, and stayed there until his retirement in 1989 due to the start of Alzheimer's disease.

Hiller amassed a wide and diverse body of work over the years – "I'd say more of his compositions were non-digital [than digital]," his daughter notes – but he never totally shed the label of amateur musician. Many of his musical contemporaries, especially those who worked with him at Illinois, saw him as a lightning rod. "Some members of the faculty loathed him completely.

"Because, you know, he touched a very deep nerve," Bruce says. Robert Swenson, who performed cello during the premiere of the suite, complained to him that "Hiller has a hotline to the international press." Conductor Jan Williams, for example, was more receptive in Buffalo. "The fact that someone began utilizing computers sparked my attention even more. He comments, "I thought it was fantastic."

The Illiac Suite serves as a memorial to a particular postwar era, one in which structuralist theories could be combined with digital technology and rule-based, mathematical songwriting approaches that trace back to ancient Greece. "It's a seminal piece in the evolution of algorithmic thinking in music, which is now ubiquitous," Rosenboom adds.

"Should I put it on and listen to it while I eat?" Certainly not. But I believe it was a formative event in terms of thinking about musical form and what it can and cannot tell us." Bruce, on the other hand, is more succinct: He adds, "I love the piece." "I think it's fantastic," says the author.

Andrix and Reuning, ironically, were unaware of the backlash that followed their debut performance of the suite until much later. It has subsequently taken on more significance for both of them. "When I realized how much of an impact it had," Reuning adds, "I was a little surprised."

"And I felt good because I'd played a part in it and performed it for the first time." That made me feel wonderful to have been a part of it from the beginning."

Thanks to Jeff Gage at The Guardian whose reporting provided the original basis for this story.