Homecoming Euphoria Has People Shouting in the Streets 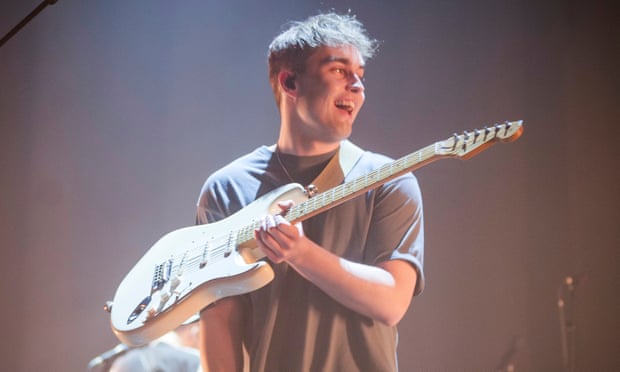 Sam Fender's rise from his debut song in 2017 to the top of the album chart with Seventeen Going Under this year is the stuff of legends, but his first arena gig in the area that formed him is something else entirely. The 27-year-old from North Shields enters the stage amid a sea of flags and phones, as well as a chorus of "woah-ohs." At moments, it seems as though the whole crowd is joining him in singing every phrase. He sputters, "I can't believe this."

The charming Geordie has certainly struck a chord by singing about everyday lives – from his mother's fibromyalgia to youngsters in Gaza – in songs that are panoramic and enormous but private and heartfelt. The driving sax recalls the late Clarence Clemons of the E Street Band, and the plangent guitars suggest the Police or Simple Minds.

Bruce Springsteen – whose song Dancing in the Dark Fender performs magically, with just a guitar – is the dominant influence, with the driving sax recalling the late Clarence Clemons of the E Street Band, and the plangent guitars suggest the Police or Simple Minds. Fender's problems, as well as his beautiful, quivering Tyneside shriek, show that he is a unique individual with a special gift.

While his songs were always too huge for the little venues where he performed just two years ago, even this crowded stadium today seems inadequate. The sound of 11,000 voices singing Dead Boys, about male suicide, which began in the evening's opening chorus, is powerful and frightening.

The northern powerhouse's already diverse repertoire ranges from beautifully contemplative (Mantra or Get You Down) to jagged and punky (Mantra or Get You Down) (Howdon Aldi Death Queue, which starts a mosh pit). Fender is surrounded by photos of the people whose lives he sings about, so when he looks up during The Borders' lyric "she took those pills and now she's gone," it seems genuine rather than hammy or theatrical.

The final half-hour is a parade of show-stoppers, with crowds roaring along to Saturday and Hypersonic Missiles. There's a tremendous "oh, oh, oh" in the mega-anthem Seventeen Going Under, about adolescent nihilism, which the audience picks up again later, in between songs. Long after the performance has ended, it is still being yelled in the streets.

On Saturday, November 20th, at Alexandra Palace in London, followed by a tour.