‘How Can I Perceive Death in a Bad Light When Someone I love Has Died?' 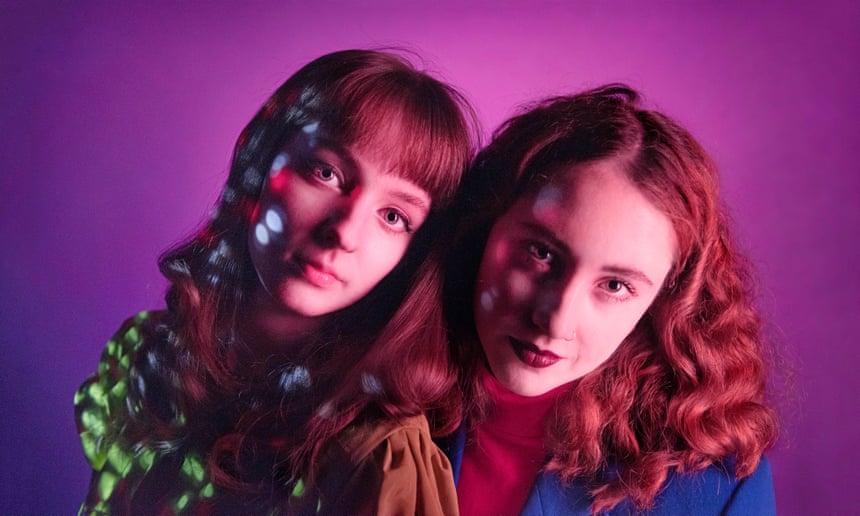 After their Guardian photoshoot, Let's Eat Grandma appear at a café, dressed as a couple of pop stars. They are both tall – around 5ft 9in – and dressed in luxurious jewel tones with impeccable eyeliner, but the similarity stops there. Jenny Hollingworth has the thick red curls of a young Kate Bush, while Rosa Walton has the fat red curls of a 1940s movie actress.

"Being back in band mode after three years away is funny to us," Hollingworth adds, "because we view ourselves as just..."

It seems natural for the two 22-year-olds to spend the next two hours chatting to one other. It's simple to relax and enjoy their zealous, insightful, and amusing company. They provide each other emotional encouragement and backing in a powerful Norfolk dialect, chuckle at follies, and delicately analyze their personality qualities from the viewpoint of an 18-year friendship (one that started over mutually appreciated snail drawings).

From their first album, 2016's garish, sludgy, swaggering I, Gemini, audiences were drawn in by their close friendship. Some reviewers couldn't believe that two Norwich college students had created such imaginative music without the help of a man. The tune Hot Pink, an industrial, bubblegum piledriver of resistance "all about the misconceptions of masculinity and femininity," according to Walton, questioned that idea in 2018.

It was the first single off their second album, I'm All Ears, which combined joyful synthpop with the rushing emotions of their superb, impressionistic lyrics. It was evident that they were enormous generational talents when they were nominated for an Ivor Novello award for best album. "We were seen as less of a novelty band," Hollingworth adds, smiling.

Their third album, Two Ribbons, is due out in April and is their greatest yet, blending ferocious energy with a fresh feeling of spaciousness. It typically takes the form of a dialogue between the two from when their relationship was at its lowest point. Early in 2018, the gaps began to appear when they realized they couldn't complete each other's sentences.

Hollingworth's partner, musician Billy Clayton, died in March 2019 at the age of 22 from a rare type of bone cancer. Even in the face of these terrible, random cosmic realignments of what had previously seemed definite, they had trust in the band's survival. It took on a mystical significance. "Not in the religious sense," Hollingworth recalls, "but we were at a point where life felt very meaningless." We were on the lookout for a purpose to live."

They had previously attempted to resist change. They were preparing for the I'm All Ears tour when they realized something wasn't quite right about their relationship. "That's what we're like: Let's have 50 discussions about it!" says Hollingworth, explaining why they worked so hard to correct it.

"We were conversing but not really saying anything," Walton adds.

It didn't function, as expected. "It wasn't as straightforward as saying, 'Oh, you hurt me by saying this,'" Hollingworth explains. "It was almost as if we were fundamentally misunderstood in some way."

Walton's move from Norwich to London coincided with the misunderstanding. She yearned for freedom and a fresh start - "somewhere busy with lots of exciting things going on and opportunities." What happened when the reality met her expectations? "Oh, no!" she exclaims, laughing. She swiftly depleted her energy reserves. "And then I found myself spending a lot of evenings alone, feeling very isolated and lonely."

Hollingworth leaps right in, friendly and upbeat. "Because you're actually a very sensitive person beneath all the spontaneity and excitement, you forget about that side of yourself from time to time, and it then cries out for help."

Walton concurs. "I'd describe myself as an extrovert most of the time, but there are times when I overdo it." She claims it's where they "balance each other out." "Jenny is a lot more cautious and takes fewer risks."

Walton attempted to write throughout this weird time. Levitation is a pugnacious, clattering song about having a nervous breakdown on the toilet floor but yet finding hope in the possibility of connection: "Shooting stars your way as I lose control of my reflection." According to Walton, it's a bizarre, colorful masterpiece about feeling "out of it and disoriented." "At the same time, you feel as if you're floating in the sky." When I'm stressed, I get it a lot: everything seems brilliant and there's a lot of creativity."

Hollingworth, back in Norwich, knew why her friend had gone - she stayed with her regularly while she journeyed to London for treatment sessions – but she couldn't help but feel abandoned, particularly as her life dwindled. She met Clayton, a local artist, in 2017, and the two became friends through their shared love of PC Music, an avant-garde pop production company. She confesses that she found him bothersome at first. "I got along better with him than you!" Walton hoots, her wonderful laugh like bubblegum inhalation.

Hollingworth admits that she might be aloof at times (though she is nothing but gregarious in person). "I was attracted to him in a way that I didn't realize I liked," she explains. Clayton was described as a "massive sweetheart" who was vivacious, humorous, and extremely sensitive.

He was often making fun of Walton's not inconsiderable height, since he was "proper tall." He was a music fan, and Charli XCX, his hero, had taken him under her wing. "However, things were extremely complicated," Hollingworth recalls.

Clayton was suffering from Ewing's sarcoma. He was doing OK until he and Hollingworth realized they were inextricably linked. She originally said that Hot Pink was inspired by her lack of respect in previous love relationships, although she claims that Clayton, her first boyfriend, treated her equally.

"We were constantly learning from one another." He was completely concentrated. I used to be a lot more disorganized, but he understood what his creative purpose was." Her confidence grew as a result of his determination. "Perhaps I didn't have a lot of faith in myself when we were working on I'm All Ears."

Clayton's health deteriorated in fall 2018, as Let's Eat Grandma's popularity grew. "It wasn't really back from that," Hollingworth adds. She is startled that she's choked up, despite her remarkable calm while recalling this horrific period of time. I offer to move on, but she refuses: "I'm just trying to get it right, that's the difficult part."

The pair continued on with their tour. Even though she was completely out of it, Hollingworth felt a duty to the band and their crew to "keep going and not make a fuss." Clayton, on the other hand, need more room. "He didn't want to be defined by his illness," she adds.

She had to compartmentalize in order to live on the road. "It was difficult because you wanted to talk to me about things," she tells Walton, "but I couldn't get access to that."

"It's such a stark contrast to being on tour, where everyone is constantly ecstatic," Walton responds. "I'm sure that made you feel even more alienated."

Hollingworth still wonders whether she made the proper choices at the time. "I tried to find out what he wanted and then gave it to him."

"But I lost sight of myself because I was doing all these different things that I felt like I needed – that I wanted to do," Hollingworth insists, "because I wanted to be there for Billy, to be with him, because I loved him."

The band was set to visit the United States in April 2019. Hollingworth had stayed in Cambridge to see Clayton, who was undergoing treatment at Addenbrooke's Hospital. She ultimately departed in order to restore his dignity. Two days later, he passed away.

Even after that, she felt she was disappointing people by canceling the band's next gigs, but they did play the Coachella event in the United States to honor Clayton, who had hoped to perform there. "I don't regret it because I was so numb," Hollingworth adds. "I don't know what else I would have done anyway."

It took her a year to regain her ability to write. The gritty, bleak Watching You Go is an obliterating distillation of her anguish and despair in the aftermath of Clayton's death.

"A lot of the emotions scared me; I didn't know how they could get any more intense without making me feel like I was going to die," she adds. She was overcome with rage, which led to "a deep sense of shame because I didn't think this was a normal reaction." It's not socially acceptable to be really upset, especially if you can't explain why."

She spent those tumultuous months in nature, finding peace in the natural cycles of development and death, accompanied by the music of 60s folkie Tim Hardin and Suede (a favorite of Clayton's mother, Becky, whom she calls "a legend" and with whom she is extremely close).

Despite the fact that Clayton was cremated and not buried, Hollingworth found consolation in visiting cemeteries. She is aware that some people viewed the way she dealt with her sorrow to be harmful. "How can I view death solely in a negative light when someone I truly love has passed away?" she argues, her voice blazing.

Clayton's death at such a young age caused Hollingworth to reevaluate her goals in life. She realized she was "overwhelmingly passionate" about music and found strength in penning Two Ribbons, which allowed her to recover her voice and music after the stress of prior tours.

"It was an agonizing process," she recalls. Their label's president said she didn't have to work so hard on her writing. She chuckles, "I was like, I'm not suffering because of the songs!" "I'm already doing it, and I'm just trying to make it look good."