How to Learn Drums on an Electronic Kit 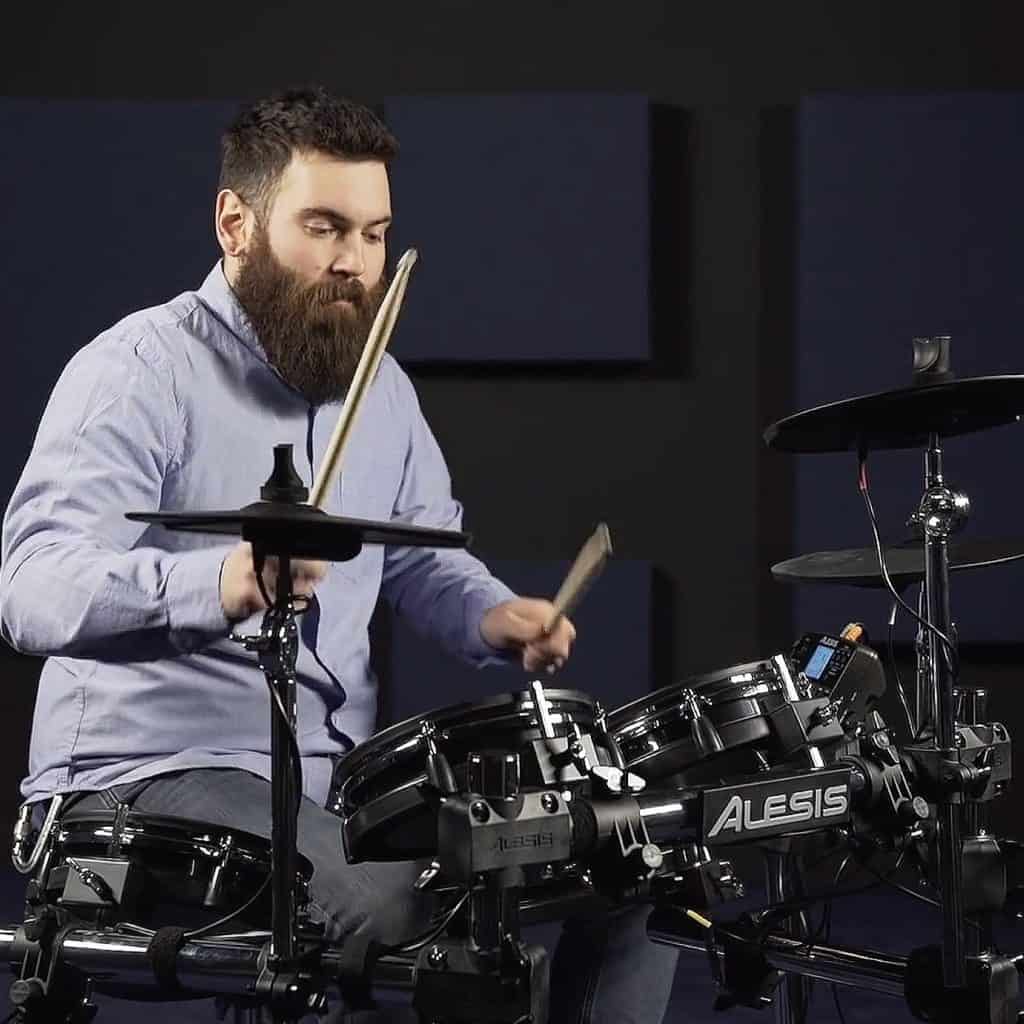 Let's start by looking at how one can start learning drums immediately, and then some of the things that we should take special note of being an electronic kit.

How to learn drums on an electronic kit 101

The first thing to do is to familiarize yourself with the kit you've boughten. To do this, let's do double strokes all across the pads of the first kit.

A double stroke is a series of drum strokes that start with your dominant hand (say your right hand) and after doing two strokes switch to your non-dominant hand for two strokes.

Hit all the pads in this way, using two strokes for each pad and switching around all the pads to hear the sounds that come out of it (including your bass drum!).

Next, switch the kit and try the next one. Really try to familiarize yourself with the kit selection and which sounds are placed where. Hit the pads loudly and softly, does hitting the pad a certain way change its sound?

This is the traditional way this beat is played, practice it until you get comfortable with it.

Now, take this same pattern and play with it around the kit. For instance, keep everything the same except move your right hand to the ride cymbal and play the beat. Then move your hand to the crash cymbal. And now the floor tom.

Feel how each of these beats creates a different emotion, and we've only been moving around the right hand.

Keep moving around your right hand, playing it on the rack tom and the rim of the snare drum for some ideas.

Getting more complicated with grooves

Even if this pattern I just explained still feels a little shaky when you start moving around your hands, you probably still feel yourself longing to make it more complex.

Let's add one note to that phrase then.

So now we have another snare drum note right before the second bass drum hit. However, this note is played alone. We can think of this note as being played exactly between the hi-hat note and the bass drum note.

Adding this note is important for a couple of reasons. We understand the difference between eighth notes and sixteenth notes.

Eighth notes are the notes we are playing with our hi-hat. They are called eighth notes because 8 of them can fit inside one measure of 4/4.

We can count these eighth notes (our hi-hat) in the following way:

As we can see, another bass drum note has been added on the 'a' of the first beat. Everything else is the same, the snare drum note stays on the 'a' on the second beat and bass drum and snare drum remain directly on the 1,2,3 and 4 (these are called downbeats)

Now let's add a note on the 'e' of the beat, the part of the beat between the downbeat and the & of the beat.

So in this example, we are playing on all the parts of the beat, the downbeat, the e, & and a.

Let's take a moment to analyze which beats are being played. One thing I like to do when I am trying to get a beat to sound natural and very tight is to break the beat down and just play it with my hands.

Playing alternating strokes on the snare drum, we can mimic the above rhythm. We will play the accented notes (the notes with the symbol '>') louder and the rest of the notes play them quite soft.

The bigger the contrast between the notes (the accented notes very loud and the unaccented notes very soft) which will come in handy when we start to study dynamics. But we will want to play this to a metronome and see how tight we can get it.

Once we feel we've gotten the snare drum pattern very tight with the metronome, go back to the full beat above and notice how much better it sounds.

As I've said before there are advantages and disadvantages to learning with an electronic kit, but the methodology is still basically the same.

So in order to practice accents with the hands we are going to do one more exercise like before. This is the same exercise as before except for the only accents are on 2 and 4. Every other note on the hand is a ghost note (a note that is played really soft).

You should notice that this beat is now way more funky. It's because we are now giving emphasis to the 2 and the 4, which are the driving parts of the beat.

The ghost notes are felt but not overpowering or distracting. They help everything propel the groove forward.

So can you learn drums on an electronic kit?

We have many other lessons available on our websites to get you started.

But remember above all to practice your dynamics and accents when you practice on an electronic kit, as the playing surface and responsiveness of electronic drums is the biggest difference between this and an acoustic kit.