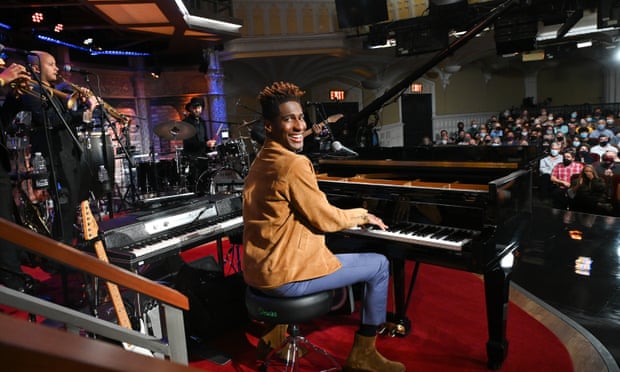 Jon Batiste, a composer and pianist, was on the move in June 2020. From his dressing area at the Ed Sullivan Theater, where he works as the bandleader for Stephen Colbert's Late Show, he was scoring Pixar's first Black-led movie, Soul, throughout the week.

He was working on the music for his eighth album, We Are, as well as writing a 40-minute symphony that will be played at Carnegie Hall next May by over 200 musicians. On weekends, he would gather a group of other players and march through New York's streets, singing songs like We Shall Overcome and Down By the Riverside to protest the murders of Black Americans at the hands of police.

"We were protesting to reaffirm our humanity," Batiste recalls over the phone from his home in New York. "When George Floyd and Breonna Taylor were killed, Black people began to feel as if our value as human beings was being taken away – and we needed to express that in our own unique way, through music." Batiste's marches came to a climax on Juneteenth, the day that celebrates the liberation of African-American enslaved people, when the 34-year-old led a throng of over 10,000 people to the Brooklyn Public Library, just a day after police fought with other protestors in the neighborhood.

"There was a lot of tension in the air because people had just been arrested by the authorities," he recalls, "but we showed up and the songs brought us together rather than fighting." "That is the social music's power."

Batiste uses the term "social music" to characterize his diverse, jazz-influenced work. He began playing drums in his family's band, the Batiste Brothers Band, when he was eight years old, before switching to piano and honing his ear by transcribing soundtracks from video games like Sonic the Hedgehog and Street Fighter II.

By the age of 17, he had immersed himself in the jazz vocabulary and had already published his first album, Times in New Orleans. Within a decade, he had graduated from the renowned Juilliard School, toured extensively, and counted among his friends and teachers Quincy Jones, Stevie Wonder, and Herbie Hancock.

"Everything I do comes from the inside out, and each album is a record of a specific moment in time and in my life," he adds. "Which is why this latest record speaks to the current protests." It means that we all have a similar heritage and lineage as humans.

We are the only ones who have the ability to rescue ourselves. The job will never be completed as long as there are bad forces in the earth."

Several of Batiste's ancestors are preachers, as shown by the way he harnesses the pulpit's strong style of wording when speaking. Indeed, it's difficult to look at his illustrious career without seeing him as a benign force destined for greatness.

He became just the second Black composer to win an Oscar for his work on Soul this year (after Herbie Hancock's 1986 victory), has been nominated twice at this month's Jazz FM awards, and is presently doing a curatorial residence at Carnegie Hall.

We Are is his greatest accomplishment, according to him. "In many ways, this is my debut," he adds, "because it's my first record on a label that speaks to who I am now as a grown-up man."

"It was recorded when I was 33, the year Jesus was crucified, so it represents a turning point in my life, when so many great musicians, including Marvin Gaye and Stevie Wonder, were producing their best work." If We Are doesn't quite reach the heights of What's Going On or Songs in the Key of Life, its sprawling 14 tracks cover the gamut of Black American music and his own history, with the marching band from his old high school, Trombone Shorty, and voice recordings from his niece and nephew – as well as famous friends Zadie Smith and Mavis Staples. He refers to it as "Jon Batiste's rebirth and evolution."

Despite the third-person statements, Batiste's popularity has unquestionably been instrumental in exposing a larger audience to jazz, not least by asking saxophonist Wayne Shorter and the Heath Brothers to play in front of millions on The Late Show. He describes jazz as a "superpower."

"It has never relied on popularity to stay relevant because its worth is undeniable; it embodies all the complexities of the human soul." It is a privilege to perform this music since it is my legacy - the Blackest, Deepest American Classical Music that has evolved into a global art form.

Jazz demonstrates that anything may come from a particular experience and be modified in a non-appropriate manner."

Batiste, who joined The Late Show in 2015, considers his position to be one-of-a-kind in mainstream American television. "There are very few people who look like me in these spaces," he adds, "and I talk about things that I don't hear anyone else talking about on television."

"I'm constantly humbled by the power we have over our audiences."

Batiste has also been engaged with the National Jazz Museum in Harlem since he was 21, where he currently serves as artistic director, another position in which he utilizes jazz to bring people together. The Cotton Club dancer Jacquie "Tajah" Murdock has performed for an audience that could include "Mary from the corner store and Philip from the barber shop," as well as Lenny Kravitz, at one of his events hosted in a Harlem church basement.

Batiste's prolific work is fueled by his emphasis on representation for people from all walks of life. "It's such a huge deal for someone who looks like me and is my age to be recognized and win an Oscar for a film about jazz with a Black protagonist," he adds.

"Being a trailblazer comes with a lot of pressure to represent and uplift your community, but you don't get many chances in life to succeed, and it makes me cry thinking about what this could mean to the next me, watching."

Batiste will continue to carry the torch with a number of high-profile projects in the works, including a Broadway musical based on the life of graffiti artist Jean-Michel Basquiat and the Carnegie Hall premiere of his symphonic piece American Symphony.

He adds, "I've been working on this for three and a half years, handwriting my scores." "I'm also proud to say that an all-Black orchestra will be featured for the first time in Carnegie Hall's 130-year history."

Because the job is never done, we're going to create history and show everyone why we're here."