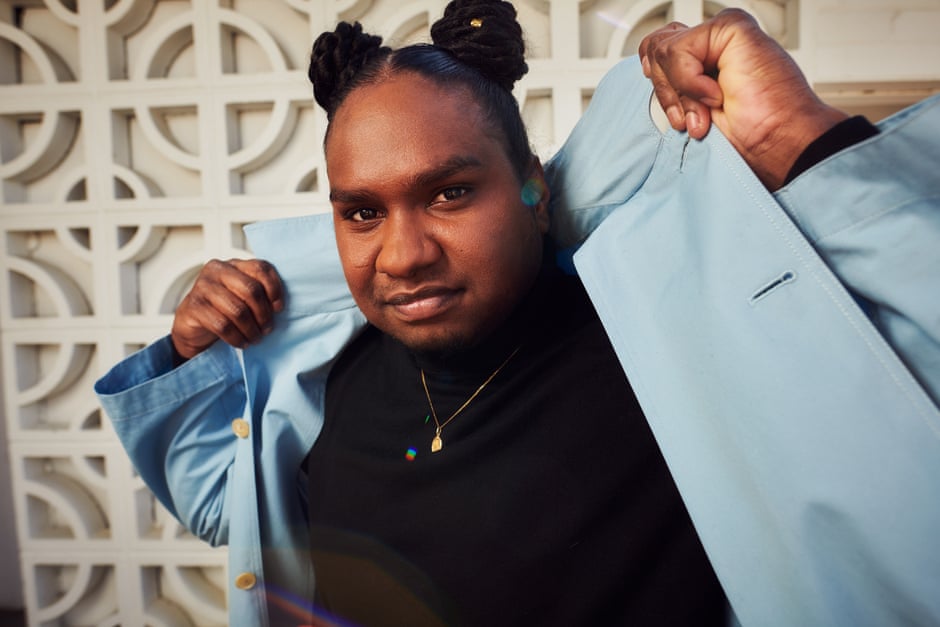 The placards were the first thing Danzal Baker noticed when he arrived at Arnhem Land's airport two years ago. He laughs, "They said, 'Welcome home Danzal Baker AKA Baker Boy!'"

Baker returned home after years of performing his catchy and original hip-hop music across the country and around the world — on festival lineups, headline tours, and as support for musicians such as Dizzee Rascal, 50 Cent, and Yothu Yindi. He'd become something of a local hero during his absence.

From his Milingimbi lodging, he could hear his melodies reverberating from the school across the street every hour or so. His singing had taken the role of the customary school bell at the school.

He said the kids clung to him "like leeches." Milingimbi is a small island village with a population of around 1,000 people.

Baker went to boarding school in Townsville as a youngster, then to the Aboriginal Centre for Performing Arts in Brisbane as an adult. He traveled Australia with the Djuki Mala dance team, performing for children in other isolated villages.

He found his voice in music, fusing English with Yolu Matha in his breakout hits Marryuna and Cloud 9, and has been progressively gaining fame since 2017. Baker has been nominated for and won prizes from the Australian Recording Industry Association, as well as the National Indigenous Music Awards, and was voted Young Australian of the Year in 2019.

His live performance became legendary. With only a few songs under his belt, he opened for Big Boi at the Golden Plains festival in Victoria in 2018.

Baker Boy's performance was so outstanding that the crowd who had gathered to see the famed rapper, producer, and one-half of Outkast virtually unanimously gave him the fabled "boot."

Baker was awarded an Order of Australia medal in January for his contributions to the performing arts business in Australia. As was his habit, he couldn't help but think of home.

"I've always wanted to show those kids in the community that they can achieve their goals." It would be fantastic if everyone began providing possibilities to distant villages so that children do not have to leave their homes in order to achieve success."

Despite the adulation and celebrity, Baker still characterizes himself as "a kid who came out of a remote community [and] found it really, really hard – struggled a lot" on the eve of the release of Gela, his debut album.

In the months leading up to his appearance at the AFL's annual Dreamtime game in 2019, I spoke with him. "I'll be in the centre [of the MCG] and too many people [will] be watching, I'll be freaking out," he said, anticipating his nervousness.

He's more assured and thoughtful today, but he's still as kind and open, willing to discuss both football and the emotions he put into Gela.

He took it up a level this year, performing during the AFL grand final with a mashup of his song Marryuna – which debuted at number 17 on Triple J's Hottest 100 in 2017, becoming the first Indigenous language song to reach the top 20 – and Kylie Minogue's Can't Get You Out of My Head. Baker, dressed in a glistening sky-blue Gucci tracksuit, transformed pop music into something mythic on the Optus Stadium field, playing the yidaki and singing about music's capacity to heal what ails you on the single Meditjin:

Baker explains, "[Meditjin] is just the Yolngu way of saying medicine." "For decades and generations, music has been a part of our culture. I'm not sure what we would have done if it hadn't been for the music.”

"I always say [if I wasn't making music], I'd be playing AFL," he says. I came to a fork in the road when I decided to audition for performing arts school rather than go to footy training, where AFL scouts were coming to watch us train."

Baker's account of stage anxiety appears to be based on actual experience when watching his infectiously high-energy live presentation. "I still get nervous right before I go on stage," she says.

“I get scared,” he admits. "But once I'm out, there's no turning back; you have to keep moving forward." "All you have to do is let it flow through your body and let the music take control."

His song is intended to inspire both himself and those who taught him the ropes back home. Baker sings about Indigenous fortitude over a booming beat reminiscent of Kanye West's Black Skinhead on one of Gela's outstanding tunes, Survive: "I don't know how we continue to exist... We keep going as if we're not going to die."

The song has references to Hollywood blockbusters such as The Lion King and Sleeping Beauty, as well as Jurassic Park, which served as a formative influence.

"We came up with the idea of trying to make a dinosaur-resistant track," he explains. "And then it naturally evolved into surviving the systematic racism and negativity that First Australians have faced."

"Something about his approach to music and performance reminds me of a classic showman," says producer Pip Norman, who collaborated with Baker on the album. "He's got a big heart and a happy personality that he wants to express through his music."

One of his most valuable gifts is his excitement and positive outlook on life. Other things come up when you're writing, though."

Gela has a new perspective on the artist's legacy, emphasizing the importance of both following existing routes and forging new ones. The album opens with a track called Announcing the Journey, which is a reference to his skin name.

Baker's Uncle Glen Gurruwiwi, one of the Galpu clan's Lead Songmen, performs this traditional song of the Galpu people of north-east Arnhem Land.

"Having him do that was really nice," he says. "Because I think I'll take over his role when I'm older." It's a huge duty, but I think I'll be able to handle it because, you know, I've already had one as Baker Boy."

His father - a member of the original Baker Boys, a dance company that toured in the 1980s – adds that on his daily trip to work, he hears local kids yelling out his son's name: "Baker Boy!" Rap a few of verses!"

Baker, wide-eyed and holding his heart at the vision of the next generation acting on his inspiration, says, "He recently told me he could hear these kids trying to rap in language." "I was like, oh my god, this is incredible."

Thanks to Brodie Lancaster at The Guardian whose reporting provided the original basis for this story.