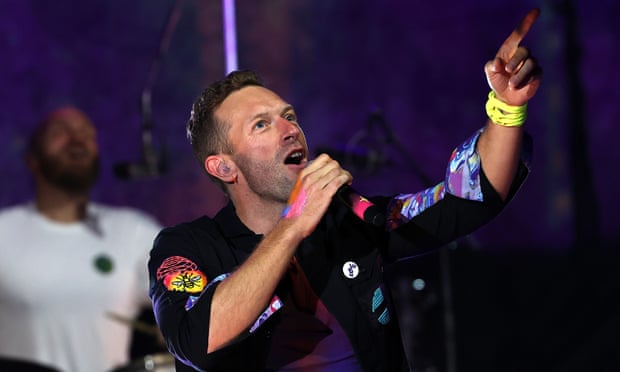 Coldplay's next album's marketing is a study in contrasts to that of its predecessor. Everyday Life, a 2019 experimental double album, was launched via typewritten letters to fans and classified advertisements in local newspapers.

Its showcase performance in Jordan included the record being performed in its entirety without an audience. Its follow-up, on the other hand, features K-pop boyband BTS and Selena Gomez among its supporting cast (collaborators, according to Chris Martin from the stage tonight, who were suggested by actor Simon Pegg's 12-year-old daughter) and was produced by Max Martin, the most celebrated of pop's shadowy super-producers and the co-author of 25 US No 1 singles.

The band actually sent their music into space to announce its arrival: the first song, Higher Power, was broadcast live from the International Space Station. Meanwhile, the band's showcase shows have taken place in New York, Paris, Berlin, and London - although in venues that are undoubtedly smaller than the backstage regions of the type of enormodomes where the band has long resided.

When a band as large as Coldplay wants to play a small venue, they have two choices. One is to reduce things to their bare essentials and give the audience a rare peek into the artist's natural condition. Even before you enter the auditorium, you get the impression that this isn't the route Coldplay has chosen: there are attendants in the foyer giving out the flashing wristbands that Chris Martin and his band use to produce spectacular lighting displays in large audiences.

As shown by the fact that Coldplay seems to have packed their whole stadium show into a 2,000-seat theatre. The projections are not just on the stage, but also throughout the arena. Confetti cannons and a slew of lasers abound.

Chris Martin's piano keys light up as he plays, and the singer's flamboyant stage motions are clearly intended to reach Row ZZ of Cleveland's Quicken Loans Arena. The show's concept of restraint is to wait until song three to bring out one of the world's greatest pop stars: Ed Sheeran, who duets on Fix You before returning later to perform three of his own songs ("Some actual big hits," Martin grins).

The playlist is similarly constructed: five songs from the next album are included, but the primary goal is to smash you into submission. Everything else they play is a song that has become so well-known that you'd recognize it even if you've spent the past 20 years avoiding Coldplay: Clocks, Viva La Vida, Paradise, Yellow.

It's a reassuring reminder of how Coldplay rose to prominence and then remained there. Despite the beige-ness charges leveled at them, they've negotiated shifting trends discreetly but effectively – albeit the cost is sometimes questioned.

If you thought their early Noughties releases were all airy generalities, wait till you hear the later stuff. It's almost brutally sharp and incisive.

The Scientist, unlike A Sky Full of Stars' diet-EDM or Music of the Spheres' Auto-Tune-assisted Human Heart (which tonight has a guest vocal from Fleur East), has a real emotional weight. In fact, you're left wondering whether Music of the Spheres' attempt to appeal to a young pop audience would succeed: Coldplay's track record indicates it will, but it's much riskier than its predecessor's forays into global music.

Music of the Spheres' success remains to be seen. But, for the time being, it's difficult not to succumb to the audiovisual barrage, which implies that Coldplay's future is secure regardless of whether the new album succeeds commercially: they could keep doing this and filling the enormodomes for the rest of their lives.