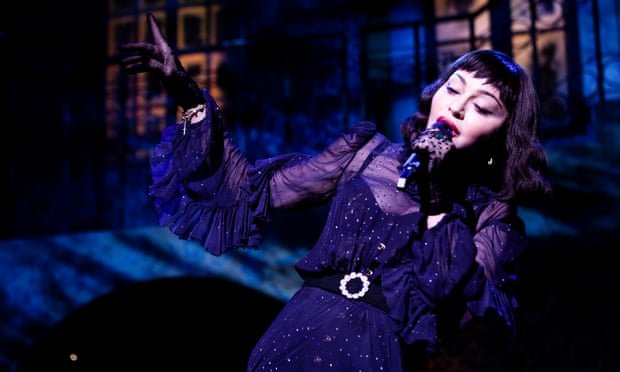 The film begins with a montage showcasing Madonna's various conflicts throughout the course of her career, as well as a quote from James Baldwin about artists being here to disturb the peace. The quaint outrage she sparked during the Like a Virgin era; the Like a Prayer video with its flaming crosses, stigmata, and snogging of a Black saint; the Sex book; the New York Post dedicating its front page to an op-ed piece proclaiming her the "degenerate queen of sleaze" with the headline: "WHAT A TRAMP!"

Of course, the Madame X tour caused concern, but not in the way that Madonna's conventional conservatives grip their pearls do. The album it promoted was a commercial failure, at least by her standards: it debuted at No. 1 in the US charts, slid 76 spots the following week, and then vanished totally the following week.

Ticket sales for her series of theatre residencies were said to be sluggish, but this was flatly refuted. The tour was pockmarked with cancelled performances, 16 in total, due to technical issues and injuries incurred by the vocalist, highlighting that the schedule was possibly too severe for its own benefit.

Fans in the United States booed her for arriving on stage hours late, and, because this is America, one entrepreneurial audience member attempted to sue her. When a show at London's Palladium ran over schedule, the venue dropped the curtain and cranked up the house lights, causing the singer to scream, "Fuck you motherfuckers!" Censorship! Censorship!”

Clearly, a fascinating behind-the-scenes documentary about the Madame X tour, as well as the larger issue of not only maintaining a career for 39 years, but doing so at the very center of pop: a fickle, ever-changing space that's changed more dramatically than ever in recent years thanks to the advent of streaming, is in the works. But the Madame X film isn't it: it's a plain concert video, and the only time you see a small clip from Madonna's revelatory 1991 documentary Truth or Dare is in the middle of a song.

It's beautifully shot – so beautifully shot, in fact, that you'll wonder how they managed to film it without interfering with the enjoyment of the live audience – and occasionally updated: the footage of protests featured during opener Gun Control now includes those sparked by the murder of George Floyd, who was killed a few months after the Madame X tour ended. It can't quite capture the sense of occasion that accompanied the performances – the delight that a superstar of Madonna's status was performing in places other than stadiums – but it does allow the viewer to marvel at the sheer bravado of her performance.

The staging is stunning and purposefully arty. The closeups on Madonna reveal a woman working really hard and, judging by the odd grimace, pushing herself through significant discomfort – and the appearance by Cape Verde's all-female Orquestra Batukadeiras is an unadulterated thrill. However, without the adrenaline rush of being there in person, there are times when the documentary lags.

It was shot in Lisbon, which is both Madonna's adopted home town and one of the few places on Earth where Madonna performing a series of fado-inspired songs with lyrics in Portuguese – an entire section of the show was dedicated to these – is guaranteed to go down as well as Madonna singing, say, Hung Up or Into The Groove. You may admire Madonna's ambition to go forward creatively and recast her music as explicitly political, but you can't help but wonder if the songs from Madame X are strong enough to justify so much attention.