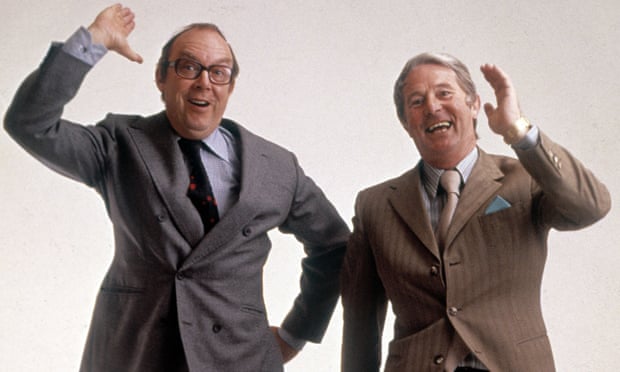 This Christmas, a lost episode of the Morecambe and Wise Show was resurrected, dating from 1970, just as the comic team had made it to BBC One. They would go on to become Britain's most successful entertainment act, with their Christmas spectacular attracting over 20 million people seven years later - according to some estimates, an incredible 28 million.

Of course, this was back when there were only three television stations, no internet, and no cellphones. This time around, the audience will be substantially smaller. But what about the comedy? What would it have looked like as it has aged?

The veteran actress Maureen Lipman declared the day before the news of the recovered episode surfaced that comedy was on the verge of extinction due to "cancel culture." "Whether we'll ever be funny again hangs in the balance," she remarked.

Do Morecambe and Wise suit Lipman's claim that "all the things that are being cancelled... are the things that have always made people laugh," leaving aside the issue of whether Lipman was ever humorous prior to the cancellation culture?

Although we should never underestimate the forensic devotion of the most intrepid searchers of offence, it's difficult to picture Morecambe and Wise upsetting anybody. Despite the fact that they were at their peak at a period when vulgar racial and homophobic stereotypes and jokes were widespread on TV in shows like Love Thy Neighbour and The Comedians, the duo's humour was centered on themselves.

Perhaps more than laughing, it now conveys an almost poignant feeling of innocence. This is the first episode in which they were taped together in a double bed, and it will be shown this Christmas.

It was a strangely natural idea that two middle-aged men in pyjamas shared a bed without resorting to double entendres or, indeed, explanation.

Eric Morecambe was hesitant to add the bed scene, according to his son, but was convinced when reminded that his comedic idols Laurel and Hardy utilized the same location. In terms of slapstick and willful misunderstandings, the similarities between Laurel and Hardy and Morecambe and Wise are obvious, but their shared comic legacy is possibly their feeling of eternal camaraderie.

It's about a relationship that's put to an endless, but not uncaring, test of teasing, and what emerges is a universe of mild absurdity that everyone can – or at least once could – identify with. In a separate but related vein, another extremely productive team from that time period was recently brought into the forefront, and the results were interesting.

The Beatles got together a year before the Morecambe and Wise episode to record, and film the recording of, the album that would become Let It Be. Because the record and subsequent film were not released until after the band had broken up, the acrimony that led to the break-up has long been associated with them.

However, we can see that the band members' relationship, particularly the lead songwriters John Lennon and Paul McCartney, was still drawing on substantial stores of mutual respect, understanding, and fondness in Get Back, Peter Jackson's three-part eight-hour re-editing of the original film tapes made by Michael Lindsay-Hogg.

It's a fantastic film in many ways, not least because of the insight it provides into the making of eternal music. It's hard to imagine McCartney didn't know the lyrics to Get Back or that George Harrison was stumped as to what to say following "Something in the way she moves, attracts me like..." You want to yell the answer backwards in time.

What's most moving is witnessing Lennon and McCartney's often nonverbal communication, a realm of creativity closed off to the rest of the world, including Harrison, who had developed into a songwriter to rival his bandmates. It's beautiful to see them laugh at each other, goof about with songs, and then be captivated by moments of mutual passion.

It talks of the limitless possibilities that exist when two people "get" one other, the sensation of the very future opening up in front of your eyes, as well as the innumerable previous experiences that went into building that understanding.

There is also an approaching knowledge of the last curtain being pulled among the joking and laughter. The understanding that even the greatest of times come to an end can be heard in McCartney's instant-classic ballads The Long and Winding Road and Let It Be. All Things Must Pass, as Harrison phrased it on his first solo album, which was made up of his songs that Lennon and McCartney had rejected.

The Beatles were only together for ten years, but Morecambe and Wise were together for 43 years, ending only with Morecambe's death in 1984. It's anyone's guess how long they'll stay in the public consciousness, but it's undeniably true that music has a far longer shelf life than humor.

But, in all situations, the love and pleasure that influenced those connections, even during times of conflict, are worth remembering, especially at a time of year when we concentrate on family and community.

"When you love somebody as much as I love Jennifer, the glee and the happiness and the pride overshadows any other stuff in the long run," Dawn French remarked this week of her envy when her comedy partner Jennifer Saunders experienced enormous success with Absolutely Fabulous. To the sounds of Bring Me Sunshine, Morecambe and Wise dance off into the fresh new bright future.

Thanks to Andrew Anthony at The Guardian whose reporting provided the original basis for this story.