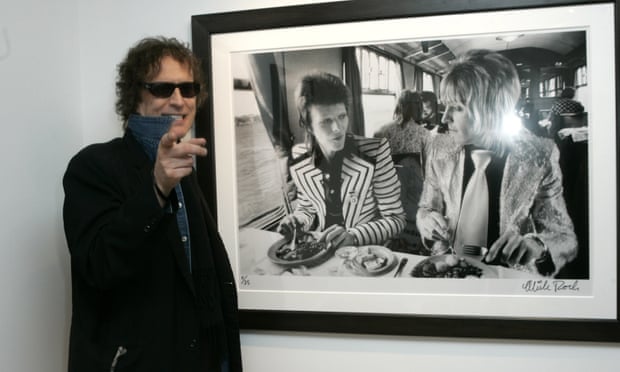 Mick Rock, a music photographer who died last week at the age of 72, famously remarked that he was "in the business of evoking the aura" of the people he photographed. It was his great fortune to be working at a period when the androgynous otherness radiating from rock stars like David Bowie, Lou Reed, and Iggy Pop, all of whom he captured in now-famous photographs, was both intriguing and terrifying. With Rock's passing, the really rebellious aspect of the cultural moment depicted in his images appears to be fading away.

Bowie's pop-cultural antennae were finely tuned and almost preternaturally predictive, as the years went on to show. Glitter and eyeliner had replaced the drab uniformity of practical denim in both his male and female followers shortly after the image emerged in the music press, and his Ziggy Stardust tour was gaining tens of thousands of younger admirers. With the rise of glam rock, which in retrospect seems to be the most extravagantly un-British pop genre ever, Bowie's moment had come, spurred by what Rock later referred to as "the titillating publicity" of that stunning picture.

Rock's closeness to the musicians on stage in the shot exemplifies the kind of access that photographers and journalists enjoyed to rock stars in those days. Indeed, his bond with Bowie was so strong that he could have been pre-programmed to record the event. Rock had just met Bowie a month before the Oxford show, having traveled up to Birmingham for the first time to shoot the singer. He paid a visit to David Bowie at his house a few days later, and the two connected over their shared admiration for Syd Barrett, the former Pink Floyd guitarist who had become a recluse after a long, LSD-fueled mental breakdown.

While studying contemporary languages at Cambridge in the late 1960s, Rock met and shot Barrett not long after purchasing a used camera on the spur of the moment from a friend. Barrett, like pre-glam Bowie, was a dandyish hippie who, even as his sanity crumbled, exuded a seductively dishevelled Romantic aura, which Rock later characterized as "a beautifully burnt-out look."

Barrett was seen outside his Earl's Court apartment in the fall of 1969, sitting on the bonnet of a vintage Pontiac and laying on the floor inside, his nude girlfriend visible in the background. One of the portraits appeared on the cover of the singer's solo album, The Madcap Laughs, which is considered to be Rock's first renowned image.

Barrett was 23 when the session took place, and Rock was 19, both of them steeped in the heady and dissolute hippie lifestyle of the moment to varying degrees. "I'm sure the LSD had something to do with it," Rock told the Guardian in 2015. "This period produced a lot of innovation, a lot of characters who were highly creative."

If I hadn't taken LSD, I would not have become a photographer. The first time I took up a camera, I was in the midst of an acid trip. It turns out there was no film in it, but it was an incredible experience that motivated me to begin photographing."

Rock was the right person in the right position at the exact perfect time from the minute he picked up a camera on a whim. In an era when meticulously scheduled, PR-controlled interviews are the norm, the access he had to the artists he helped immortalize seems amazing. On 14 July 1972, he brought Bowie backstage to meet Lou Reed at the King's Cross Cinema in London (later to become the Scala) because of their relationship. Reed's performance that night, he subsequently characterized as "like a Jungian journey into some primal hinterland."

The stunningly atmospheric, slightly hazy monochrome photo of a vacant-looking Reed that accompanies the singer's David Bowie-produced solo album, Transformer, was really taken live at that London event. The next night, Rock went to the theater to see Iggy and the Stooges' only London gig, since they were in town to record their third album, Raw Power, with Bowie serving as executive producer. Another dramatic live photo by Rock – Iggy, bare-chested and highly made-up, leaning on the microphone stand and peering out into the audience – appears on the cover of an album that, while being mostly forgotten at the time of its release, would become a landmark for the punk generation.

The iconic pictures created by Rock in a single year have endured over the decades as symbols of a period when rock music had a cultural significance that has since vanished. They talk about taking artistic risks, gender flamboyance, and fearlessness, but also about the camaraderie of a small group of outcasts and mavericks, whether performers or image-makers.

That voyage resulted in some genuinely great music and photos, one feeding off the other while also articulating it. Mick Rock famously stated of Lou Reed and Iggy Pop, "They were eccentric and threatening by any standard." He captured their discordant, confrontational energy in visuals that still reverberate, and in doing so, he can't help but underscore the lack of it in today's music.

Thanks to Sean O’Hagan at The Guardian whose reporting provided the original basis for this story.