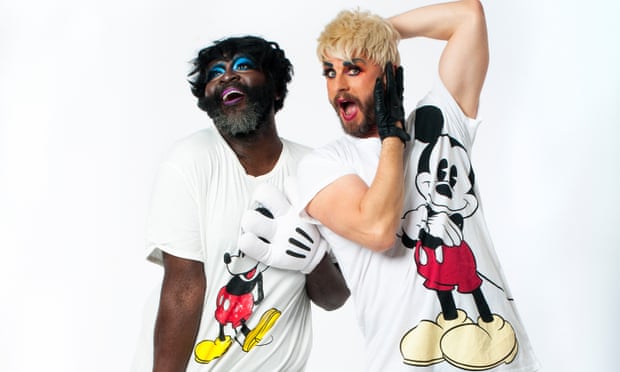 Good luck spreading holiday happiness on the same day that your concert, like every other at this location, has been Covid-canceled till the new year. But, despite the fact that this is a sad background to Le Gateau Chocolat and Jonny Woo's cheap-and-cheerful songs-from-the-shows cabaret, the two refuse to give in.

The so-called "ebony and ivory of drag" deliver exactly what fans want with this follow-up to 2018's A Night at the Musicals: high camp, affectionate send-ups, OTT costumes, and flashes of flesh – all underpinned, like the sturdy foundations of a garish building, by Le Gateau's resonant bass-baritone, which is still rumbling somewhere in your guts halfway home.

That's partially due to over-amplification: the performance is often excessively loud on the mike, whether it's sung, spoken, or pretend-squabbled. The greatest moments are the most subtle — take, for example, Le Gateau's beautiful rendition of Whitney Houston before the song devolves into a stompalong. Woo provides a couple lip-synch songs, multi-roling amusingly to At the End of the Day from Les Mis, and performs a striptease to Sondheim and Jule Styne's Some People, despite his partner's musical abilities (by his own admission). When a skimpy garment is discarded and a skimpier one is shown, this is the type of spectacle that expects — and gets – whoops of applause.

"Lower your expectations," we're told right at the outset, and the show does exactly what it says on the box. But it does it with contagious joy and heightened awareness of Le Gateau and Woo's own foolishness. When the former strides on stage, swaddled more like a furball than a feline, to sing from Lloyd Webber's Cats – while Woo makes a comic appearance as a rubber-headed shark halfway through Le Gateau's Little Mermaid duet – the scene is priceless.

By the end, it's more of a singalong than a concert, as the duo takes requests, performs a Sound of Music medley while costumed as matching Marias, and finishes with a Grease crowd-pleaser. Our present discontented winter is a long way from Summer Nights, but Le Gateau and Woo's cheeky cabaret is a wonderful way to divert your attention away from it.

Thanks to Brian Logan at The Guardian whose reporting provided the original basis for this story.