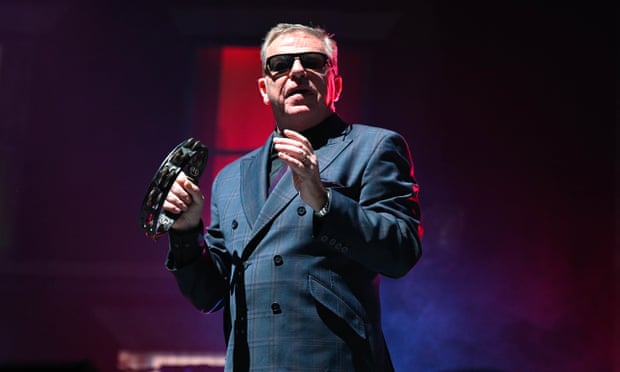 "We haven't played live in two years," Suggs says, reflecting on how the epidemic ruined this British pop institution. "At the bus stop, I've found myself singing to old grannies."

Still, the band and the crowd are back in their seats in a matter of seconds for the Madness December tour's usual seasonal favorite. Fezzes are worn by around a quarter of the audience. The sunglassed, besuited singer opens the evening in a stage-left phone box, ostensibly calling his mother, and retains the sweetly dazed aspect of someone who awoke in a stadium from a dream.

In 1980's Embarrassment, he modifies the lyric "I'm feeling twice as old" to "three times as old" at the age of 60. He doesn't have to finish the "Hey, don't watch that..." opening to One Step Beyond since the crowd will do it for him.

With no new album to sell, this tour relies largely on the classics, and The Prince and a magnificent My Girl establish a high standard that they don't fall much below the rest of the night. NW5 and Mr Apples, two more recent tunes, easily punch their weight.

The "nutty boys" appearance belies Madness's complex substance, which covers a wide range of topics in British society, including homelessness and racial discrimination. Two of the tracks are brand new and have yet to be released.

Over a samba-like beat, Baby Burglar muses on a wasted adolescence of "petty criminality." "I thought I was going insane in the last few years, but who's to say I wasn't?" Suggs jokes as he introduces If I Go Mad, a song with enough hooks to become another Madness hit.

The Sun and the Rain is a terrifying home run of classics, and that song is nicely represented by video of Gene Kelly in Singing in the Rain, despite the venue's boomy sound and a missing vocal cue at the opening. Our House is set against their own street scene stage background, and It Must Be Love becomes an enormous sing-along. "No more singing to old ladies!" screams Suggs, observing the ecstasy of the throng.

"This is the real deal!"