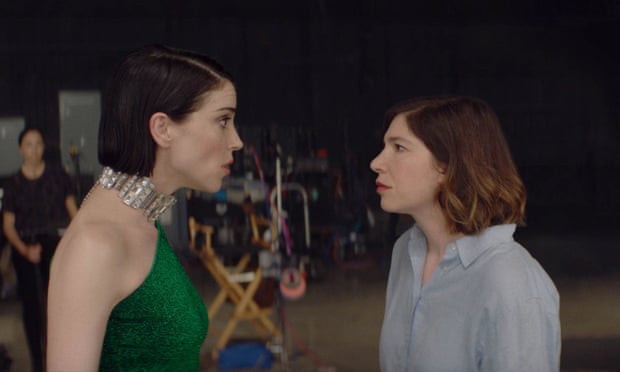 This mockumentary is a heavily hyphenated affair, produced, written, and starring singers Annie Clark – better known by her stage as St Vincent – and Carrie Brownstein (of Sleater-Kinney). It's a pseudo-road trip that alternates between cringe humour and surrealist reveries, all while commenting on the absurdities of the music industry.

It's ostensibly chronicling Brownstein's shooting of a music documentary about her longtime friend Clark, and it's a pseudo-road trip that alternates between cringe humour and surrealist reveries, all while commenting on the absurdities of the music industry.

The Nowhere Inn seeks to mock the grandeur of Clark's trenchcoat-and-sunglasses costume, beginning with a beautiful view of a limo whooshing along a lonely road across the desert. The limo driver constantly wonders whether she is genuinely famous.

In the vignettes that follow, Clark's concern over the gap between her supercharged, latex-swathed stage image and her low-key "real" self grows: she gets turned away from her performance venue, and the film takes not-so-subtle barbs at annoying music reviewers. While Brownstein frets that the film is "too boring," Clark lets her celebrity alter ego take control, culminating in a sex tape with Dakota Johnson, who is a welcome breath of fresh air in an otherwise drab entertainment.

The Nowhere Inn, a film filled with anxiety, aims to answer the topic of authenticity by delving into the murky truth of documentary filmmaking and the artificiality of celebrity. Still, a mockumentary's efficacy depends on a grasp of the topic it is mocking, and complaints about Clark's lack of interest being too "relatable" seem out of place.

The comedic skits by Clark and Brownstein, whose snark reduces to just noncommittal pieces, represent the easy comments on the music business. The picture, which is much too cool for its own good, ends up going nowhere. Only serious St Vincent and Brownstein fans may be interested.

Thanks to Phuong Le at The Guardian whose reporting provided the original basis for this story.