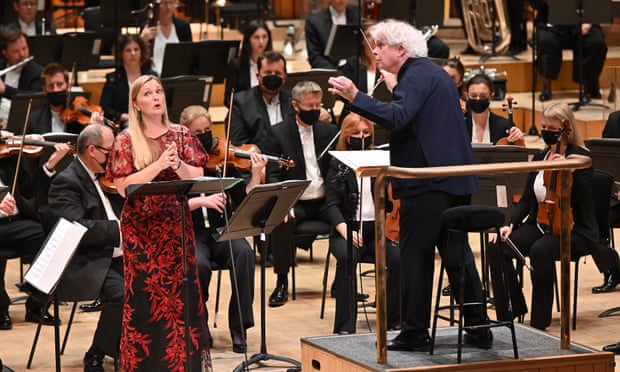 In the opening act of the Royal Opera's new staging of Verdi's Rigoletto, Titian's alluring Venus of Urbino dominates the sumptuous court of the greedy Duke of Mantua. Later, it is replaced by the same artist's Rape of Europa. We know that the 16th-century duke was a renowned collector – and that when Mantua was in financial trouble, Charles I scooped up many deals – but none of these pictures, nor Caravaggio's Martyrdom of St Matthew, shown in a twisted tableau as the curtain rises, were ever in Mantua.
It doesn't matter. Whether on canvas or cotton linens, the message is clear: the Duke sees women as commodities.
This is the opera director. It's Oliver Mears' first production for the Royal Opera, and Antonio Pappano, the company's music director, is conducting Rigoletto for the first time in his two decades at Covent Garden.
They make an excellent team, delivering a performance that honors the music while seldom interfering with Verdi's sweepingly dramatic composition. With the exception of one gratuitous act of singular cruelty, lifted from King Lear and introduced to underline Mears' concept that the Duke is a dangerous psychopath, this is a remarkably straight production that is clearly built to last, replacing David McVicar's licentious staging, which was first seen in 2001.
Simon Lima Holdsworth's muted reds and golds, which shine so atmospherically under Fabiana Piccioli's lighting, evoke Renaissance Italy, yet we might be anywhere, at any time. Rigoletto, a pitiful clown who throws obscenities at any of the Duke's critics while privately despising his job and his employer, enters Mantua's pitiful court.
Carlos Lvarez is completely immersed in the part, his damaged baritone as expressive as his beautifully dynamic and characterful face. He brilliantly portrays Verdi's combination of pain and compassion in his duets with his beloved Gilda, the daughter he keeps hidden in stifling isolation, an obsession that will have fatal repercussions.
Gilda is played by Cuban-American soprano Lisette Oropesa, who has a delicate voice and seems frail but is steely in her belief that the demonic Duke loves her. She sings Caro nome with an innocence that evolves to knowingness, assuming the same stance as the Venus of Urbino as she lays in her bed – a gesture beautifully picked up later by the wanton Maddalena (an underpowered Ramona Zaharia) as she plots murder with Sparafucile (a magnificent Brindley Sherratt).
As the Duke, Armenian tenor Liparit Avetisyan delivers La donna è mobile with aplomb. However, he has a tendency of jerking the pace around elsewhere, most notably in his love duet with Gilda, but Pappano never lets him go off the rails.
The strong all-male chorus contributes sharp singing to the pit's fine musicianship, especially at the start of Act 3. The grand opera has returned with a vengeance.
One of the many things we'll miss about Simon Rattle when he steps down as music director of the London Symphony Orchestra in 2023 (to be succeeded by Antonio Pappano), is his uncanny ability to create musical connections, to show us the golden thread that connects music throughout history. Last week, he celebrated British music by masterfully combining Henry Purcell's daringly passionate 1680 hymn Remember not, Lord, our crimes with Michael Tippett's royal 1962 fanfare Praeludium for Brass, Percussion, and Bells.
The London Symphony Chorus, returning after 18 months of Covid restrictions but still relegated to the top gallery, performed the Purcell with remarkable vigour before moving on to the evening's most highly awaited piece, two movements from Julian Anderson's new work, Exiles. It's a work for solo soprano, chorus, and orchestra that tackles a topic that's relevant today: what it's like to miss your country.
With so many individuals uprooted and disenfranchised, the song speaks directly to the core of the issue while also forcefully appealing to those who feel politically exiled in their own nation.
The soprano Lucy Crowe performed the text of a lyrical email written by composer Ahmed Essyad in the first movement, expressing his wait for inspiration as a stunning sun beats down on Morocco, a lovely place he can't enjoy since he's banished due to a Covid lockdown. Anderson's orchestral composition, which is sometimes exquisitely nuanced, shimmers with the transparent light of north Africa, while his perkily lovely vocal line echoes Essyad's email's bittersweet humanity.
When the chorus played the exiled Israelites in Anderson's arrangement of Psalm 137, "By the rivers of Babylon," there were some pitch and balance issues. His sinuous but restless music demands accuracy, which was sometimes lost due to the chorus's remote location, but it was nevertheless a superb world premiere, a tantalizing sample of the full piece.
Crowe shone once again in Natural History, Judith Weir's haunting interpretations of Taoist poetry, and in Vaughan Williams' elegiac Pastoral symphony's last movement, her plangent soprano drifting over a landscape so deftly sculpted by Rattle. On Friday, September 24, at 7.30 p.m., listen to it all on Radio 3.

Thanks to Stephen Pritchard at The Guardian whose reporting provided the original basis for this story.