London's O2 Arena
He may be approaching 50 and a family guy, but a glitter-clad woman Robbie Williams is learning that he can achieve all of his goals

You would assume Robbie Williams had something to prove based on the manner he begins his performance at London's O2 Arena. Since joining Take That in 1990, Williams has been reflecting British society back at itself in a whirlwind of hair gel and bravado, making him a national icon and one of the best-selling performers of all time. In addition, he has had a life full of extreme highs and lows, including admiration and ridicule, addiction and recovery, which has left him something of an outcast. You hear him tonight before you see him. The event had a fly-by-the-seat-of-your-pants atmosphere thanks to that recognizable, perennially boyish voice checking the mike, "two, one two." You then notice his silhouette. He appears from behind the band, locked in an Elvis posture with his mike in hand, his flared pants on. Robbie enters the stage as they begin the song Let Me Entertain You wearing a box-new pair of white sneakers, a French crop mullet, and a gold glitter waistcoat. Now scream, he exclaims. They also do.

Williams is a singer who, like Liam Gallagher or Alex Turner, has the ability to tap into a kind of British masculinity that is loud of tongue and soft of eye: songs for men who are always one Carling away from breaking down over a day with their grandfather 24 years ago. You get the impression that these songs are ageless since they were penned from a precipice as he circles the stage while belting out lyrics like "I don't want to die, but I ain't keen on living either" and "My bed's full of takeaways, of fantasies of easy lays." The possibility of failure hovers over every high, whether he says "I'm a star but I'll fade" or laments that "youth is wasted on the young." 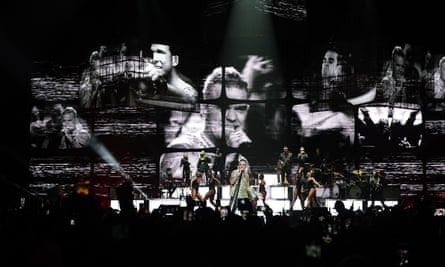 The tour is in promotion of Williams' most recent album, XXV, which re-records and orchestrates 25 years' worth of classics and fan favorites with the Metropole Orkest. It's basically a customized tour of his career, from boyband hero through the cocaine years to his present station as a family guy whose kids believe he's lost his looks. Songs range from Take That's The Flood to Rock DJ to Kylie Minogue duet Kids. Before pounding out a version of Don't Look Back in Anger so resonant it should genuinely anger the Gallagher brothers into burying the hatchet, the set is filled with stories like going on vacation with Geri Horner when he was first getting clean and smoking cocaine with Oasis at Glastonbury.

It's hardly surprising that the trip seems virtually final given its structure. He speaks about 1990, the year Thatcher resigned, when the Berlin Wall collapsed (in November 1989, to be precise), and when Take That was created, which was more significant. He provides live commentary for the Everything Changes music video, describing the jelly that is bouncing off of his nude body and how Gary Barlow obtained all the major roles. He recalls how reading NME in the 1990s gave him "big ideas" for songs he wanted to write. He promises to be there for them and declares that he is happy. A camera briefly focuses on an elderly guy fan with a homemade banner that reads "hardcore since '74" at one point as it passes the barrier (the year Robbie was born).

To counter, there is a lot of the creator of Rudebox (which he graciously does not play). He clutches his crotch, gestures into the audience, and yells, "This is my bum, this is my arse," before bending down and saying something about becoming older. He is yelling "come on you fuckers" to the audience inside the first five minutes. He puts on a bespoke wrestling robe for the sweeping encore of No Regrets and She's the One, holding his arms out in front of him while the orchestra amps the songs up to operatic proportions.

Williams is a complete showman from beginning to end, much like his father Peter, who is the Sinatra of working men's clubs. He extols the virtues of entertainment and declares that the most important guideline is to "love your audience," a sentiment that is obviously reciprocal. He looks at Knebworth 2003 and says, "When I asked you to grow old with me at Knebworth you did, didn't you?" before concluding with Angels.

Williams, who is about to be 50, doesn't only create songs about having a good time and being youthful. He acts with the excitement of what may follow. Turns out there is a happy ending, is his closing message to everybody who has followed his trip from the beginning—and, I suppose, to himself.

Thanks to Emma Garland at The Guardian whose reporting provided the original basis for this story.