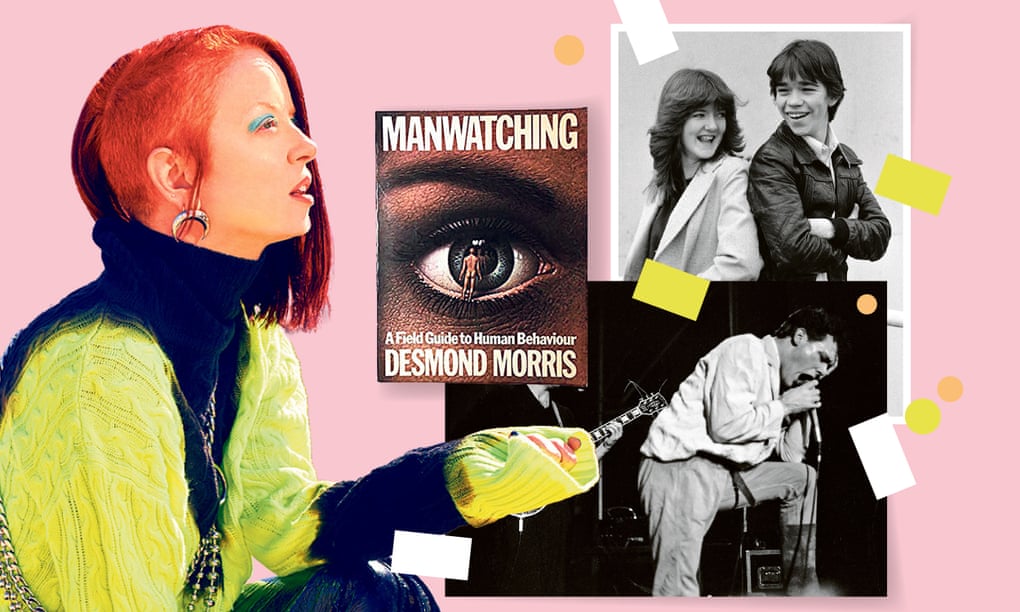 This book appeared in every bookstore display about 1980. When I was 13 or 14, I received one for Christmas. It was my father's choice. “What the fuck is this?” I recalled wondering. But once I began reading, I couldn't put it down and got completely absorbed in it. It has to do with human behavior. This book blew my head as I was just learning my sexuality and how we connect to other people. I recall a part on "displacement reactions," which are what you do when you're anxious or uncomfortable and want to change the subject. With my legs, I used to perform this weird thing. I'd shake them and brush them against my thighs. It was strange, and my friends teased me about it, but once I realized what was going on, I was able to control my unconscious behavior. The book altered my perspective on everyone, and I've been intrigued by people-watching ever since. There were also images of genitalia and sex-related material [laughs], which I don't believe has ever been discussed in my home. As a teenager, it was enthralling.

Edinburgh Youth Theatre is a youth theatre based in Edinburgh

Miss Francis Hill was my high school English instructor. She was a true Miss Jean Brodie, and she chose females she was interested in and thought had a lot of potential. She encouraged me to become a member of the Edinburgh Youth Theatre. I had no clue what it was, but I went along with Rebecca Pidgeon, who went on to become a well-known actress. It became a source of great pride for me. Putting on plays and musicals, working with an ensemble, and studying scripts were all things I enjoyed. We'd put on performances in the fringe, and that's when I got my first taste of fame. I learned how the stage operates, including the importance of lighting, the crew, and other behind-the-scenes details. I met Martin Metcalfe, the main vocalist of Goodbye Mr Mackenzie, there, and he asked me to join his band as a keyboard player. My whole existence came crashing down around me. I don't believe I ever really recovered from my previous state.

I come from a family that is extremely traditional, kind, and compassionate. My father was a devout Christian. It was beautiful, but it drove me crazy, because my sisters were really sweet, while I was this thunderbolt for some reason. I'd leave the house with a quarter bottle of Famous Grouse whiskey, Winston cigarettes, lipstick, and blusher in my pocket. The Hoochie Coochie was a great club where I could dress up, wear a lot of eyeliner, do strange things with my hair, and hang out with other people who did the same. I'd take my girlfriends there, dance all night, and then leave. They constantly played fantastic music, and there was always a sense that something interesting was going on. Joe Strummer was present. I met Ian Astbury of the Cult and watched Shriekback perform live. Rockers, rockabillies, mods, punks, hipsters, and art school students were all there. I met a lot of fascinating individuals, and it once again broadened my views in terms of what was conceivable. Talking with [the Associates'] Billy Mackenzie in the bar is one of my favorite recollections. He was the largest celebrity I'd ever met, and I'll never forget the feeling of rubbing shoulders with a legendary performer and being pulled into his charm vortex.

Of course, I'd seen Billy Mackenzie on Top of the Pops, at a time when seeing another Scottish person on television was rare, or at least it seemed that way. It was fascinating, confidence-building, and thrilling to see Billy or Clare Grogan from Altered Images. I believe I began watching Top of the Pops when I was four years old. It was the one TV program I never missed, and it included the Clash, Siouxsie and the Banshees, David Bowie, Roxy Music, and everyone else who had ever mattered to me. In the dining room, we had a little black-and-white television with three push buttons for changing stations. Every now and then, the TV would go "on the blink," as they used to say, and my sisters and I would let out a collective scream. My father would rush down the stairs and bang the television, and the image would gradually return. I recall being seated between my two favorite people in the world, my sisters, and being enthralled by music.

Georges Bataille's The Story of the Eye

I was dating a guy who was not in a monogamous relationship but with whom I was passionately in love. He was in Finitribe, probably Edinburgh's trendiest band at the time, and he was unlike anybody else I'd ever met. He was a feminist, brilliant, and attractive man who brought me to art exhibits and museums and introduced me to books I would never have encountered otherwise. He handed me this story from 1928, which he felt was "intellectually really interesting" but which I found terrifying. Nothing has ever scared me more than a sentence from this book. I don't recall the specifics, but a couple of young lovers are masturbating a priest, and he is compelled to renounce his God during the climax. It made me extremely aware of the power dynamics between men and women, and the notion of defilement titillated me, but it also pushed me and exposed me to thoughts that I would never have considered on my own. People tell you about the "bogeyman" when you're young, but I'd never been exposed to something so terrible or wicked. Björk's favorite book, I later learned, and I puzzled why she liked it so much since I found it frightening. The novel, of course, made me like the kid even more.

Grange Hill is a hill on the outskirts of

My first day of high school, when I met eyes with my tormentor, had been the scariest day of my life up to that point. In my first year, I was severely bullied, and it was because of this girl that I turned inwards. I didn't want to draw attention to myself since I was afraid she would punish me. Because I didn't believe in myself, I stopped being an excellent student. I began smoking, drinking, and cutting myself in secret. I'd return home and turn on Grange Hill. Grange Hill was a mirror of my life. I wanted to be as hip as Tucker Jenkins, so I got a feathery cut like Trisha Yates. It was a high school-themed TV program, and everyone dressed the same way — huge blazers and enormous ties. The topics impacted on my own experiences, particularly bullying. I couldn't speak about it with anybody, not even my sisters, but Grange Hill was able to take my hand and guide me through an extremely difficult and perplexing period. It was a lifesaver for me. Grange Hill was my closest buddy when I was a youngster.