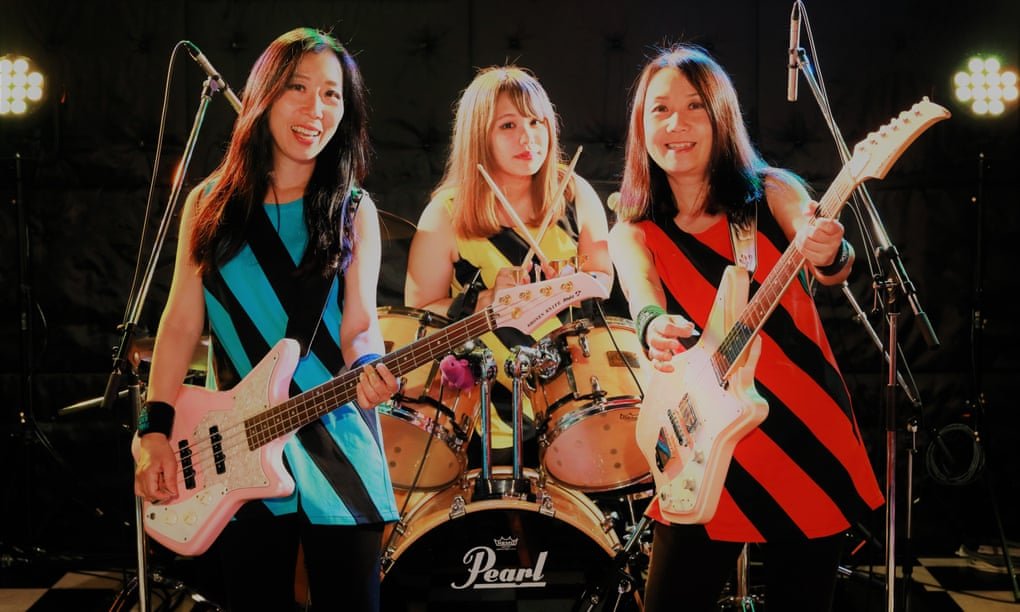 Few rock bands survive to be 40 years old. Shonen Knife's achievement is all the more remarkable since there haven't been many all-female rock bands from Japan that have converted their fascination with junk food, beautiful animals, and the Ramones into a global career.

Let's Knife, released in the UK by Creation Records immediately after a career-changing tour with Nirvana, was their breakthrough album in 1992. It was a punk album unlike any other, with lyrics about frontwoman Naoko Yamano's envy for exotic American girls with blond hair and blue eyes, as well as pontification on life's more frivolous pleasures like eating jellybeans, riding a bicycle, fishing for black bass, and – less relatably – becoming a cat and growing whiskers.

As we gather in the Tokyo headquarters of Shonen Knife's Japanese record company to reminisce on the last 40 years, Naoko, 60, says, "I was too embarrassed to write songs about love." "Instead, I wanted to write about the things that mattered to me, such as sweets and delectable food, or cute animals." I'm not much of a thinker, so all I want to do is compose music that makes people happy."

Shonen Knife began in 1981, when Naoko and her classmate Michie Nakatani decided to turn their enthusiasm for the Beatles, the Jam, and the Ramones into their own band. They hired Naoko's younger sister, Atsuko, on drums, in addition to Naoko on guitar and Nakatani on bass.

On December 29, 1981, the three entered a small room at the Rock Inn rehearsal facility in Osaka for the first time. "It felt good to hear the guitar and bass coming through the amplifiers, as well as the loud drum sound," Naoko says of their first practice, during which they performed renditions of songs by British punk and pop bands such as Delta 5, Buzzcocks, and Mo-dettes. Then, in March 1982, they performed their debut show in a modest Osaka venue, when young Atsuko's nervousness caused her to break out in a rash.

Parallel Woman, Naoko's debut song, was one of the seven or eight songs they performed that night. Parallel Woman, which was later released on Shonen Knife's 1983 album Burning Farm, laid the groundwork for Shonen Knife's songwriting style, with detailed observational lyrics about Naoko's experience working in a factory while dreaming of revealing her true identity as a rock'n'roll superheroine – the mundane writ fantastic. Naoko and Nakatani composed songs that were primarily uplifting, innocent, and pleasant in a punk milieu where bands growled lyrics about class struggle, drugs, sex, and violence, making their music all the more disarming.

"Shonen Knife's embrace of everyday kitsch demonstrated that alternative music didn't have to be doomy and impenetrable – and that well-constructed pop wasn't just the preserve of crack backroom writers," says Gus Lobban of Kero Kero Bonito, a London-based pop band. I Wanna Eat Chocobars, he writes, are "colorful, ragged, and hummable all at once – they still feel cheekily subversive today," and their attitude "altered my perception of what DIY expression could be."

Shonen Knife managed to create a big audience in the United States and Europe despite the fact that music streaming and social networking were still decades away. Calvin Johnson – founder of K Records, a label at the heart of Washington state's indie, punk, and grunge scenes – discovered an early Shonen Knife record in a Tokyo record shop in the mid 1980s and, after seeing Naoko's home address printed on the inner sleeve, wrote her a letter offering to release an expanded version of Burning Farm in the US during a visit to Japan in the mid 1980s. Alternative rock legends Sonic Youth, L7, Babes in Toyland, and Redd Kross all endorsed the 1985 cassette release, and all covered Shonen Knife songs for the 1989 collection Every Band Has a Shonen Knife Who Loves Them.

Shonen Knife then toured with Nirvana in late 1991, at Kurt Cobain's request, just as they were becoming the world's largest band. "I had never heard of Nirvana before that, but they looked wild, and I was terrified, so I didn't want to tour with them at first," Naoko chuckles. "By the end of the tour, however, we had become friends."

Kurt Cobain gave it all he had every night, shouting and playing guitar so loudly, so I admired Nirvana's approach to music." At a show in Kilburn, London, the other support band, Captain America, was attacked with cups by the crowd. "However, because we were all female and had traveled from a faraway country, the audience was more courteous to us."

Shonen Knife's performances on that tour, for their part, were lauded by Kurt Cobain. He told Melody Maker, "I've never been so thrilled in my entire life." "They play pop music – pop, pop, pop music," says the narrator.

Stewart Lee, a comedian, was one of the newly converted fans in the crowd at London's Kilburn National Ballroom on December 5, 1991. "It's easy to forget how Kurt Cobain's patronage acted as a kind of bush telegraph before the internet," Lee remembers.

"A female Japanese Ramones-inflected powerpop trio would be a hard sell in any capacity other than as a novelty under normal circumstances, but Cobain used his celebrity to push loads of massively worthwhile music over the line." Since then, I've been a huge fan of Shonen Knife."

Lee arranged for them to perform at the 2016 All Tomorrow's Parties event, which he organised. "They appeared, Naoko still at the wheel at 55, dressed in futuristic spacesuits, and greeted the throng with enormous waves of 1-2-3-4 delight. In the age of music from which Shonen Knife arose, women were and still are marginalized characters, and they were and still are real pioneers."

Following the Nirvana tour, Let's Knife was released in 1992, and it was the first of many albums to be produced exclusively in English. Shonen Knife's attractiveness is enhanced by minor grammatical mistakes or unusual pronunciations, which add to the purity of their sound.

"I don't want to be able to sing perfectly in English," Naoko explains. "I prefer to come across as unique."

Shonen Knife had a dark spell in the mid-1990s, if a band this persistently cheerful can have one. From 1994 until 1999, the band was without a label in Europe, and Nakatani — the band's bassist, co-founder, and equal composer – departed after their fantastic album Happy Hour, citing the hardship of traveling.

Despite the difficulties, Naoko said she never contemplated giving up. "Leaving Michie was difficult for me, but I felt I needed to move forward," she adds. "It makes me happy when people are happy because of our music." It is for this reason that I compose music. That is what fuels my will to keep going. I've never contemplated quitting up."

Naoko's sister Atsuko stepped up from drums to bass when Nakatani departed, resulting in a rotating door of backup drummers, then later in 2006 she left the band for a prolonged time to settle down in Los Angeles. Although Atsuko has rejoined the band, Naoko has remained the sole permanent member.

Despite these challenges, Shonen Knife have constantly published music since their inception, and in 2009, they signed with UK label Damnably, putting an end to their years of wandering in the UK. Following their signing to Good Charmel, the US label founded by Goo Goo Dolls bassist Robby Takac, Shonen Knife embarked on an exciting new chapter in their career, releasing eight studio albums and touring the globe for a new generation of fans.

"I'd been involved with Shonen Knife over the years, first as a fan, then as a label owner, producer, roadie, van driver, and finally, after many releases and tours, as friends," Takac explains. "I've always been impressed by Naoko's commitment, dedication, and meticulous attention to detail."

On drums, Naoko and Atsuko are now accompanied by the ever-bearing Risa Kawano. The band is already working on their next album, which Naoko suggests will have a psychedelic flavor similar to that of the late Beatles.

"It'll be enough for me if people look back and say, 'There used to be this really fun band from Osaka,'" she adds of their legacy. I inquire as to what advise she would offer to her 40-year-old self now. She chuckles and says, "I have no advice." "I'm not sincere and I'm very free." So even if I offered 40-year-old Naoko some advise, she would disregard it, and I would disregard hers!"

I inquire as to whether she has a favorite Shonen Knife album or song, but she dismisses the question as well: "The next album will be the best." And so on. "I never look back and I never regret anything," she adds, adding that she has no plans to retire. "If I live for another 40 years, I'll be the world's oldest rock musician," she jokes. "The happiest memory is yet to be made."

Thanks to Daniel Robson at The Guardian whose reporting provided the original basis for this story.