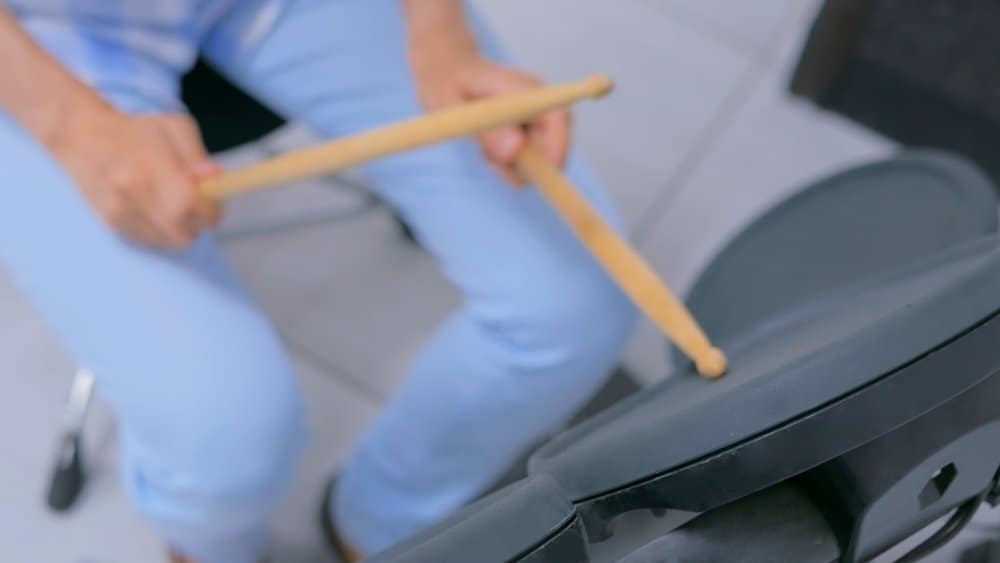 In my experience of teaching beginning drummers, they don't immediately want to grab the sticks and start learning rudiments or sticking exercises, they want to learn songs by their favorite bands.

It's completely natural, since we don't see all the work that goes into becoming a great drummer. We want to be able to play a song as quickly as possible, just like we would pick up the guitar, learn guitar chords and learn to play simple songs.

So what are the best songs to learn if you are just starting out on drums? Maybe you've bought an acoustic kit, or an electric kit or are still practicing on a pillow but are planning on taking lessons soon. So let's get to it!

What songs should I learn on drums if I'm a beginner?

Let's start simple. This beat is one of the most common beats in rock and pop history. It is known as the 'money beat' in the industry because it is the simplest and sometimes most effective beat that, well, brings in the money.

Billie Jean, apart from being a song that just about everyone knows, utilizes the money beat like no one's business. The drummer of this track, Leon Ndugu Chancler, knew exactly how to fit in perfectly with the music and make it groove hard.

There are a couple of fills in the song, but as a beginning drummer, I would just worry about making it through four minutes of playing the money beat clean and without stopping.

The Beatles - In My Life

In my life by The Beatles is a song that requires some coordination for a beginning drummer, but usually in an afternoon can master it. Most of the song is comprised of a beat where the hi-hat is not constant, like the previous song.

The beat (transcribed below) is played throughout the verses. It is only on the choruses where the drum part changes to a ride bell part with a snare fill and back to the money beat.

(For these transcriptions, the B stands for bass drum, the S for snare drum, and the HH for hi-hat).

Let's move into modern rock territory for a second. This beat is great because it is essentially the money beat but with one extra bass drum note. This song is great for practicing our crashes as well on the downbeats. Listen to the song and see where the drummer hits the crash and try to imitate it when playing back.

Another fun part of this song is that during the guitar solo of this song he changes his right hand (where he was playing the hi-hats consistently) to the rim of the snare drum. Now we start to see the possibilities of changing the sound of the beat just by moving our hand around the drumset.

So this song seems simple at first, but for many beginning drummers, it has a syncopated note that can be tricky at first.

We are going to go back to our basic beat, but instead of playing eighth notes on the hi-hat, we are going to play quarter notes.

We are going to play 2 measures of this beat, however, on the second measure we will push the bass drum note over one-eighth note, from beat 3 to the & of beat 3.

At a fast tempo, this can become tricky. Especially if we practice playing the entire song trying to have little or no mistakes.

Kool and the Gang - Get Down On It

Here we go again with the money beat. The thing about this song, however, is it a great song to practice 'fills' to. Fills are little ornamentations that drummers put between the beats. In this song, there are not too many fills, but there are a couple that the drummer will repeat throughout the song.

This is a great song to work on groove and practice some fills, since it is a medium enough tempo that it is not too hard to play snare fills over.

This song is so well known it has been taken on as a soccer anthem in Europe, so it's a great song to practice since you know the melody.

The song starts out with simple bass drum quarter notes (you can emphasize them by playing them with the floor tom as well). Then in the continuation of the verse we have snare drum notes that come in on the 2 and the 4.

This part can be challenging if you are not used to entering the beat on the 2 and the 4.

Now the build-up which is again is quarter notes on the toms and a crash on the first measure:

And now we are in the chorus where we have a similar quarter note beat to Beat It. The only difference is we play in on the crash instead of the hi-hat.

This great song from the nineties is a great song to practice a beat with a syncopated bass drum pattern that loops for about 4 minutes.

The drummer, Jimmy Chamberlin, is usually a very active drummer and plays really cool and complicated drum parts over the Smashing Pumpkins songs. However, for this one, he kept it simple, in the pocket and left us a great song to play along to.

For the beat we have a consistent set of eighth notes, and a backbeat on 2 and 4. The whole pattern written out looks like this.

From the moment the track starts and you hear that cymbal spank, you know what’s coming next.

“Clint Eastwood” is one of the early 2000’s most signature tracks, and it just so happens to be perfect for beginners to learn.

That famous intro fill makes appearances throughout the song (it serves as the transition between the hook and verse, and vice versa). Given that this fill is just (cymbal + kick) eighth notes for two beats, odds are you’re not going to be pressed to keep up once you practice for an hour or two.

As relatively simple as the drums are here, don’t neglect their sophistication. The hi-hat makes excellent use of dynamics, and really dialing in the variation in velocity is what it takes to make sure people hear the groove as OG “Clint Eastwood” and not some goofy Garageband loop.

Welcome to Groove 101. Your professor for the day is this 1980’s classic, which just so happens to be one of the best drum parts a beginner can learn.

Here’s a look at the recurring loop present throughout the song:

That kick note we highlighted? You should see it, the one right before the “3” and the “1”. Don’t get it twisted, that little note is serving a very important purpose. It’s position just before the downbeat (the “2” and “4) is what gives this groove its intensity.

Here at Jam Addict (and I’m sure we’re not the only ones), we call this special hit a “lilt.”

Lilts don’t necessarily need to be the responsibility of the kick drum, but lilts built on a low-frequency percussion hit tend to work well.

Eminem - My Name Is

Go ahead and laugh, but if you’re a beginner looking to expand your game on the kit, take an afternoon and practice this groove until you have it dialed.

At first listen, there’s nothing special about this song’s drums. Like a lot of hip hop, it’s just a single one-bar loop that plays endlessly as the real Slim Shady lobs expletives like hand grenades.

This song, however silly, does offer beginning drummer’s something you’ve never come across – the song’s time feel makes use of sixteenth note triplets.

In modern pop music, there are three main types of time feels:

The second time feel, and you’re probably familiar with this one, is shuffle feel (or swung eighth note). This is the time feel used by jazz and big band music.

A famous relatively-recent pop song using shuffle feel is Katy Perry’s “I Kissed a Girl,” in case you want to see this old-timey groove style in practice.

The final time feel is what we call sixteenth note triplet. That’s a mouth full, but I bet you’ve already heard a thousand examples of this time feel.

Sixteenth note triplet is the sound of new jack swing, and it gives your grooves a slightly different feel than either shuffle feel or straight sixteenths.

If you can keep your playing in the pocket as you jam out to “My Name Is,” you can start to tackle other sixteenth note triplet tracks, like Bruno Mars’s “Finesse.”

Dragon Force - Fury of the Storm

Ok, you got me. This one isn’t for beginners.

Unless your kit looks like this, any attempt at recreating the beat in this song is futile: 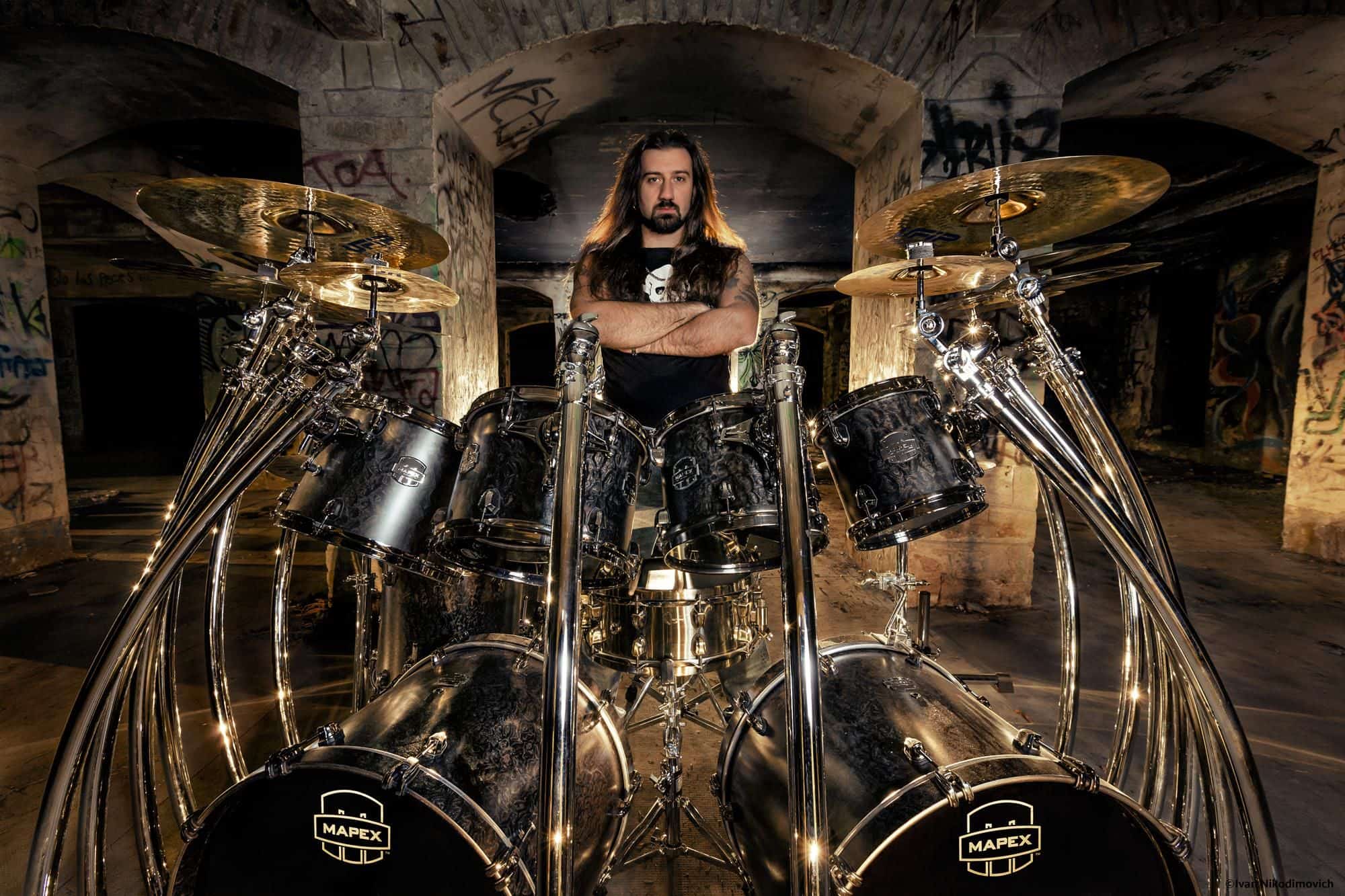 But go ahead, we urge you to just see if you can keep up.

Let this song remind you that there’s plenty of work for you to do. If you keep your practice consistent and let your ears guide you, one day you too can jam play along to this Canadian hard rock classic.

When picking a song to learn drums be sure to pick something at your level, and really try to master the whole song. There are plenty of great songs to start with, and in an afternoon you will be able to play the entire song.

After you learn these songs, go ahead and look through your record collection to find songs that you think you can play! If you can, try to write out the drum part using drum notation.