The Drums You Sit On: History and Use of Cajón 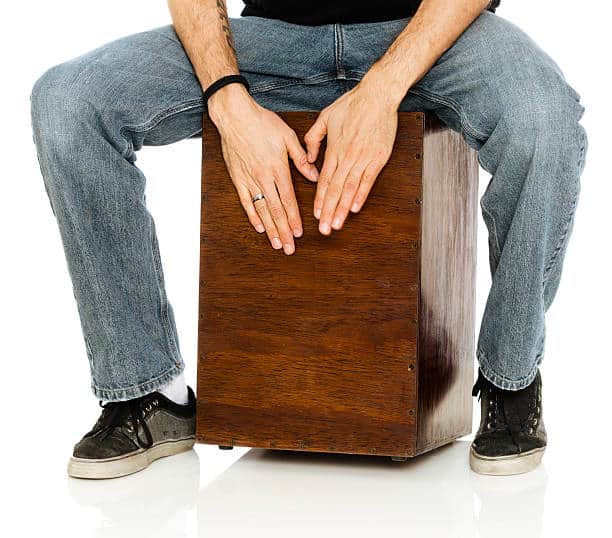 The cajón drum is a percussion instrument that can be used to play many different styles of music. It means literally, crate or drawer in Spanish. Cajons are primarily used in styles that include flamenco, jazz, and Afro-Peruvian music.

But they are commonly employed today by bands and artists playing acoustic sets.

In this article, I want to detail the fascinating history of the cajón as well as give a glimpse of how people are using it today in modern musical settings.

History of the Cajón

Produced initially from small shipping dog crates or drawers, the cajón was an instrument that it is supposed was used by servants and slaves during the slave trade in Africa.

People would slap the face of the box with his or her hands to create a drum beat.

The abolition of slavery likewise brought the cajón to Latin America and become a cultural artifact used in traditional folk music, especially in the country of Peru.

Although during the 18th century all kinds of drums and drumming were banned, as they thought drumming threatened their authority, the crates and boxes were ways to camouflaging their instruments and the servants helped the music to survive throughout the century.

While it is not clear when the cajón as we know it was put to use, there are images of people using the drums by Peruvian artist Ignacio Merino, which date back to 1841.

The cajón reached a height in popularity by 1850, and by the end of the 19th century, cajón players were attempting to re-design of the instrument by bending some of the wood in the instrument's body, adding a hole to help with acoustic vibration, etc.

In the 1980s the instrument started to infiltrate popular culture since Spanish flamenco guitarist Paco de Lucía took the cajón to Spain and used it in his music after discovering it on his travels throughout South American and specifically Peru.

In 2001, the cajón was stated National Heritage by the Peruvian National Institute of Culture.

In 2014, the Organization of American States stated the cajón an "Instrument of Peru for the Americas".

The front of the cajón (where you slap) is generally made out of thin plywood. Sheets of 1/2 to 3/4 inch thick wood are customarily used for the other sides of the cajón.

Standard cajones has a hole at the back so the acoustic sound can travel out. You slap the front in the middle for a bass drum sound and the top/sides for a slappy high-pitched sound.

The drum can be hit with the hands, fingers, or sometimes executes such as brushes, mallets, or sticks.

The modern-day cajón may have rubber feet placed on the bottom to prevent it from moving. It also may have several screws at the top for adjusting percussive tone. You can tweek those screws to achieve a buzz-like effect while hitting the face of the drum.

This makes it resemble a snare drum and allows one to have a mini-drum kit just with one cajón.

The cajón is becoming quickly available tons of music styles from all over the world. It has been used in blues, pop, rock, funk, world music, jazz, and many more.

The reason is you can use the cajón as a bass drum instead of a complete drum kit when performing in minimalist settings. In this case, the cajón can as both a bass drum and a seat for the drummer.

The way of playing the cajón in this manner is to connect a regular bass drum pedal, turn it around, and play it with primarily the heel of your foot (instead of toe). You can even buy a connector pedal, so you can play the clutch facing the usual way but have the other pedal be hitting the cajón.

Check out this demonstration of a woman using a connector pedal to hit the cajón.

This leaves the hands (and another foot) free to play other instruments, and in a minimalist setting (and folk or traditional setting) can not only be practical but fit very well!

You can add hi-hat, snare, cymbals...the world is your oyster!

Some people just use the kick drum pedal and hit the edge of the cajón with their hand, treating it as a snare drum, which means all you need to bring to the gig is a kick pedal and your cajón.

Styles of music with the cajón

As we mentioned, the cajón is used in many different musical settings. We said before that Paco de Lucía was the first to make the cajón popular in Spanish Flamenco music.

Below you can see a modern quartet performing Flamenco music and the drummer using a cajón.

You can see that the drummer is using just his hands to make the low and high tones of the cajón.

The cajón is also used in jazz settings. In the video below we see a trio playing light to medium volume jazz and the drummer is only using a cajón and a cymbal!

She is also utilizing brushes to get different textures out of the drum other than just the slapping sounds that you can get with your hands.

The drummer also doesn't need to utilize a 'drum throne' she just sits on the drums directly.

Hopefully, you found these different applications and the history of the cajón interesting!

Check out other jam addict articles for more interesting reads: