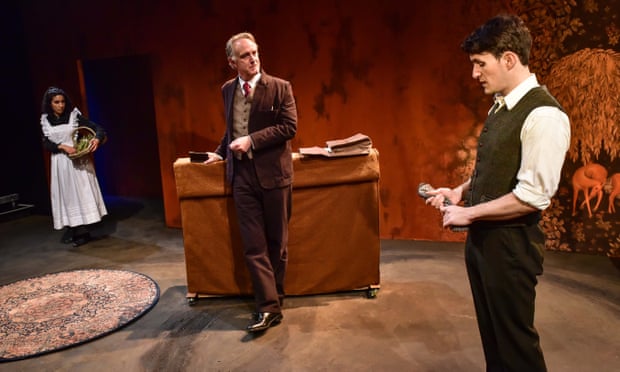 My play started in an epiphany, but it would take me ten years to complete. I had written it off as a failing effort until Roxana Silbert of Hampstead Theatre prompted me to revisit it.

Covid intervened, and the production was delayed, leading me to believe it would never be broadcast; nevertheless, BBC Radio 3 broadcasted my version as part of their Drama on 3/Culture in Quarantine series, and I was relieved. Finally, the drama is being staged in its entirety at Hampstead Theatre.

I've been known to burn manuscripts that don't appeal to me, but this one had survived the flames.

I was born and raised in Somerset, first at Glastonbury and subsequently in a little hamlet on the Somerset Levels. In 2009, I visited the Rural Life Museum in Glastonbury to view an exhibition on Cecil Sharp and folk music. Sharp began collecting songs in 1903 and created the English Folk Song and Dance Society in 1924.

A image of John England, a gardener who sang to Sharp what is said to be the first song he ever collected, The Seeds of Love, was on display during the show. Another was of a vocalist who had hailed from my own village. Then I saw pictures of Louie Hooper and Lucy White, two sisters from a nearby hamlet who together performed over 100 songs to Sharp.

Folk-song collection grew in popularity in the early twentieth century, spurred by a desire to save these songs before they were lost to the Industrial Revolution's tail end, when machines would plow the land and sewing would be shifted to factories. Many of them were released by Sharp, who arranged them for piano and edited the lyrics to make them fit for a middle-class audience.

He cleaned up rhymes and rhythms before copyrighting them and putting his name on them. This was not considered a heinous conduct at the time. Sharp received approximately 100 songs from the two sisters, but their identities were never mentioned, and their tales were never recounted.

The pictures of the sisters kept resurfacing in my mind. After doing some investigation, I discovered that they were the daughters of a famous singer who would have sang these songs to her children, songs that they knew by heart.

I began to picture how it would feel if your body had that many songs, enough to sing for days on end without becoming tired of them. I write both theater and prose, and ideas emerge from both forms: this was unmistakably a play, about the human voice and live music.

I came upon an interesting transcript of a 1940s interview with Louie Hooper, then in her 80s, in which she discussed her love of music, how she listened to birds and rain and recognized melodic patterns in their noises, and how she sat by the village elders and "caught" their melodies. I was enthralled by her. My mind is constantly captured by the undiscovered narrative, the quiet voice.

Meanwhile, my investigation found Keen to be outspoken and ruthlessly ambitious - Sharp by name, sharp by nature. He was a vehement opponent of women's suffrage and refused to record songs by black American performers. Many of the songs he gathered in Somerset and elsewhere were published under his name, and he marketed himself as a folk song specialist, relying on other people's labor to make a living.

It would be simple to compose a play that would deconstruct him, but there was a snag. Sharp had another side: he had a lot of admiration for country singers, and he managed to gather over 5,000 songs that would have been lost if he hadn't written them down in his notebooks. The play's central theme would be discord.

I had the tale now, but the intricacy of the subject matter got overpowering as the themes became obvious. The songs were also collected during a period when England was seen to be lacking in outstanding classical composers.

All new music had been European since Purcell's death in 1695, and we were dubbed "Das Land ohne Musik" — the land without music. Sharp and his fellow collectors thought that by collecting these folk songs, composers would be inspired to produce new classical music based on them, re-establishing England as the center of classical music once again.

In the years leading up to WWI, Sharp regarded these songs as having the ability to "refine and strengthen the national character." The issue of nationalism was the one that gave me the most trouble: it made me reflect on my sentiments toward my own country.

The play is clearly about England, her songs, and her landscape; I wrote it at a time when I felt a rising sense of nationalism as we approached and exited the Brexit referendum, as well as as the world around me was changing and questions about the history of our country houses and museum artefacts began to be asked. As history grew more rigorous and accommodating of other people's stories, it became more intriguing and complicated.

Sharp discovered "his" England not far from where I grew up. My imagination began in my Somerset hamlet, and I have a creative connection to the earth.

I have an enormous sense of richness when I reflect about my time there, but I'm not sure what to do with it. How can I show my affection for my country without sounding nationalistic?

And how can I communicate that affection while also acknowledging that romanticizing the past ignores the reality that there was intolerance for diversity and casual racism in my own hamlet, where dogs were still called the N-word in 1977?

I've realized that the play is a tool for me to work with those issues. Every time I write, I'm trying to figure out what I'm thinking about.

Sharp invaded the villages in search of the tunes that had made him famous, but he also protected the songs. The play required that I portray those two contradictory facts in the same tale.

I also wanted to find a method to express that I care for the location where I was born while also acknowledging its intricacies and my sentiments about it.

"Everyone loves their country," Louie Hooper says in my play. It's just the piece of land where we were born, the first thing we see and smell. It's the music and the tales."

The songs Sharp gathered inspired many forms of new music, including the 1960s folk revival, which continues to feed folk performers today; it also inspired new classical music from Holst, Vaughan Williams, and Butterworth, which influenced Benjamin Britten. All of this is because to Sharp, but it's also thanks to a pair of little-known sisters who lived on the edge of the sea in the middle of the Somerset Levels.

Thanks to Nell Leyshon at The Guardian whose reporting provided the original basis for this story.