The Slits' Voice for Female Inmates 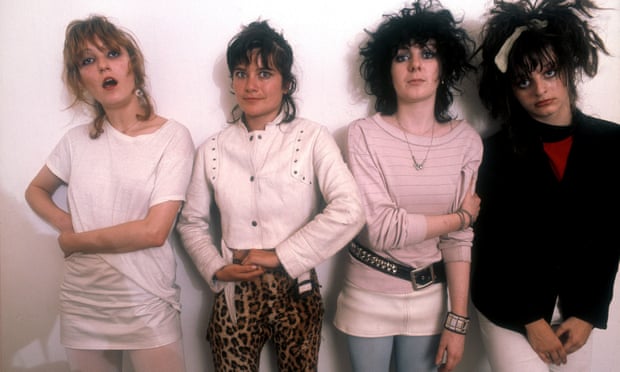 To be honest, it was a bit of a "pinch me" moment. I sat in the Typical Girls practice room earlier this month, seeing our amazing company perform the Slits' songs to Tessa Pollitt, a founding member of the band.

Never in my wildest thoughts could I have dreamed we would reach to this stage when I initially began creating this program. We were both smiling at the liveliness of it all, as was this amazing icon, punk royalty.

This is something we've all wanted to accomplish for a long time.

The Slits represented revolt and self-expression, establishing one's own distinctive voice and disregarding the naysayers, defying the current quo and questioning what it meant to be a woman. Their music is infused with global influences and elicits feelings of pleasure, anger, and playfulness.

Being able to develop characters that would discover layers of meaning in the words of these songs has been such a great opportunity for me as a long-time fan.

This piece of gig-theatre had been in the works for six years until Covid forced us to postpone our dates until late 2020. Clean Break and Sheffield Theatres were able to reschedule it, thankfully.

Finally, we are putting the work on stage, and I am beyond thrilled. It's a huge, chaotic, happy show about surviving in a world that doesn't care about you and the restorative power of art.

I was dispatched to HMP Send in Woking to produce a small piece of play with some women who were in the Pipes section there while working with Clean Break, a theatre group that works with women impacted by the criminal justice system - in prisons and at its London studios. It's a mental health facility that specializes in working with women who have personality problems and have previously undergone extensive therapy.

It's referred to as a "progression unit," and it generally indicates they're close to being released.

We'd come in to help them write a short piece of theatre based on their jail experiences, which they'd then play for the other women and staff on the unit. A few sessions were eye-opening, joyous, and humbling.

Working with Clean Break is a pleasure because they invest completely in work that is transformational and artistically engaging, and the women were given the opportunity to discover what that meant. As the resident writer, I was charged with putting up a screenplay that we could all work with and that they could mold and experiment with.

It was a fantastic teamwork exercise.

So, when I was asked to write a lengthier essay for Clean Break, I thought about my time in the unit. In fact, I believe the original inspiration originated from a directive I got on my first day at HMP Send.

I was instructed not to tweet about what we were doing or make any other public announcements about it. When I inquired as to why, I was informed flatly that if the story made the news, we would be shut down.

Or, even worse, the unit was in danger. Arty types doing creative things with individuals in jail didn't sit well with the media.

I couldn't understand how anybody could find anything to be upset about at work. The work we and other visiting businesses conducted focused on the therapeutic value of "play" and the importance of learning to establish healthy attachments.

Pipes units had a significant decrease in reoffending following release, according to the research. These devices were effective.

As a result, when I began writing the play, I looked into the concepts of limitations and silent initiatives working behind the scenes to affect change. I looked into what it means to defy a system when you're living in one of the most repressive.

I looked at what individuals do to express themselves and find compassion when they are under stress. I looked at how art, music, and creativity may help people recover.

And it was via this play that I was able to harness these emotions. Then I realized it required music, and what better music than the Slits' to work with?

And being in the practice room with Tessa, listening to everything come together, was more than I could have imagined. Our amazing cast will raise the roof of the Crucible and demonstrate the power of music and theatre.

Thanks to Morgan Lloyd Malcolm at The Guardian whose reporting provided the original basis for this story.