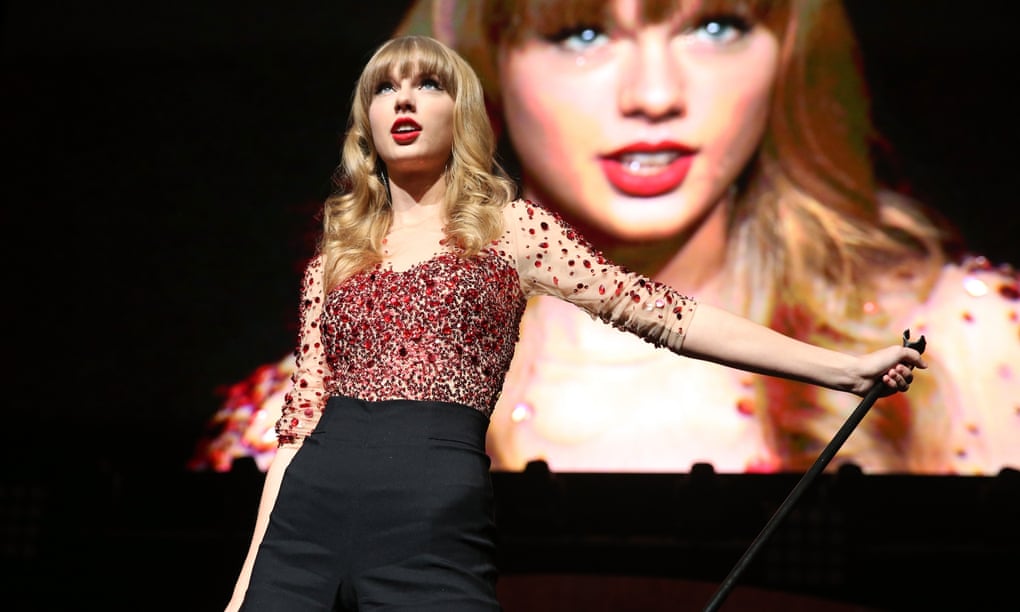 Taylor Swift's attempt to re-record (and reclaim ownership of) the six albums she released for label Big Machine, which were allegedly sold out from under her to an old rival, continues with the release of Fearless earlier this spring. Red, released in 2012, is one half of some of the greatest pop songs of all time – I Knew You Were Trouble is a rare pop-EDM crossover that still stands up, the chorus drops hitting like bratty stomps of frustration at her own naivety; We Are Never Ever Getting Back Together is a euphoric cheerleader chant so ingratiating you wonder how nobody came up with it before – and one half schmaltzy filler,

It's the album on which she embraced synth-pop, making accurate replication somewhat simpler than the purely organic Fearless – just set the parameters and go. The new version is wider than the original, which wasn't exactly a wallflower to begin with.

However, there was always going to be the issue of Swift's voice being deeper and more mature than it was a decade ago when revisiting this older work. She's used her innocence as a weapon many times, but none more so than on Red, when she used it to chastise the older guy (rumored to be actor Jake Gyllenhaal) who crushed her heart when she was 21.

The original's tempestuous portrayal of grief, rendered in properly vaulting shades of pop, country, balladry, and electro-tooled violence, was fueled by a frenzied, wonderfully spiteful edge that was little blunted by the absence of burn and twang here.

Thankfully, these inclinations were curtailed, and Swift developed her own sparkling, 80s-influenced take on pop with 1989, released only two years later.

The Keepers, on the other hand, solidify the album's ruthless obsession with time: how long it takes to get over someone, the shelf life of any young woman's appeal, and the pitiful plight of emotionally frigid ex-boyfriends who are forever doomed to stagnate in their obsessions with status over love. Better Guy is a gorgeously filigreed Nashville ensemble tune about resisting the humiliating expectations of an older man by really daring to leave him (a Swift song originally done by country band Little Big Town). Before wearing the Swiftian velvet gloves, she reveals that she still misses him: if only he'd been less of a schmuck, they may have had a shot.

Swift, who was in her early twenties at the time, was painfully conscious of her novelty eroding if that man overestimated her young. On Nothing New, she sings, "People love an ingenue." It's a melancholy, gently strummed vignette from a night of inebriated paranoia, in which she feels crushed by the passage of time and the evaporation of her self-knowledge with it, and predicts the harsh turnover of young women in the public glare.

The original lyrics imagine her meeting a teenage star with "the kind of radiance you only get at 17 / She'll know the way and then she'll say she got the map from me" – but she defies that culture of replacement and rivalry by re-recording this archival track as a collaboration with Phoebe Bridgers, a younger songwriter, noted fan, and fellow lowercase girl. Bridgers, too, may be Swift's finest duet partner (although among a long list of perplexing combinations), her charming hangdog shrug a terrific counterbalance for Swift's irrepressible brightness.

Nothing New articulates observations that Swift would not make publicly for years – not until the 1989 era's overexposure, combined with several public missteps, briefly made her a pariah – and you wonder (aside from the fact that it's thematically similar to The Lucky One) whether the people who worked on it thought its incisive lens was beyond the scope of what a Swift song could be at the time.

That might be true of the re-strongest recording's selling point: a version of the already epic All Too Well that has been enlarged to honor Swift's original 10-minute manuscript, with every verse preserved (in addition to the straightforward re-recording of the shorter version).

It's one thing to faithfully re-record a beloved album; it's quite another to mess with the song widely regarded as Swift's ur-text, one in which she eviscerates her slick ex in a series of increasingly climactic verses that never resolve to a chorus, only a shuddered realization of how vividly she recalls his disregard. Her most cited line is "You call me up again just to break me like a promise / So casually cruel in the name of being honest." "You were tossing me the car keys / 'Fuck the patriarchy,'" she sings early on, and it seems jarringly out of place.

The official lyrics sheet makes it apparent that she's citing someone else, but the quotation marks aren't audible, and that type of pithy, formulaic feminist rebuttal wasn't commonplace when she composed this song at the turn of the decade.

The other new lyrics double down on melodrama combined with piercing observations of the emotional vampire who stood her up on her 21st birthday; who couldn't name what they had love "'til we were dead and gone and buried / Check the pulse and swear it's the same after three months in the grave." Swift, who has been vocal about her compulsive eating, depicts herself as a "soldier who's returning half her weight" at that time, and a subsequent lyric makes apparent the physical toll of his treatment as she sings that her body is withered by shame.

It's a public flogging fit for a king, but the lengthy recriminations also serve as life support, keeping the affair alive so that we may ultimately figure out how its blood used to beat. On the album's title track, Swift sings, "Missing him was dark grey, all alone." Red (Taylor's Version) adds deep, gothic dark tones to the mix.