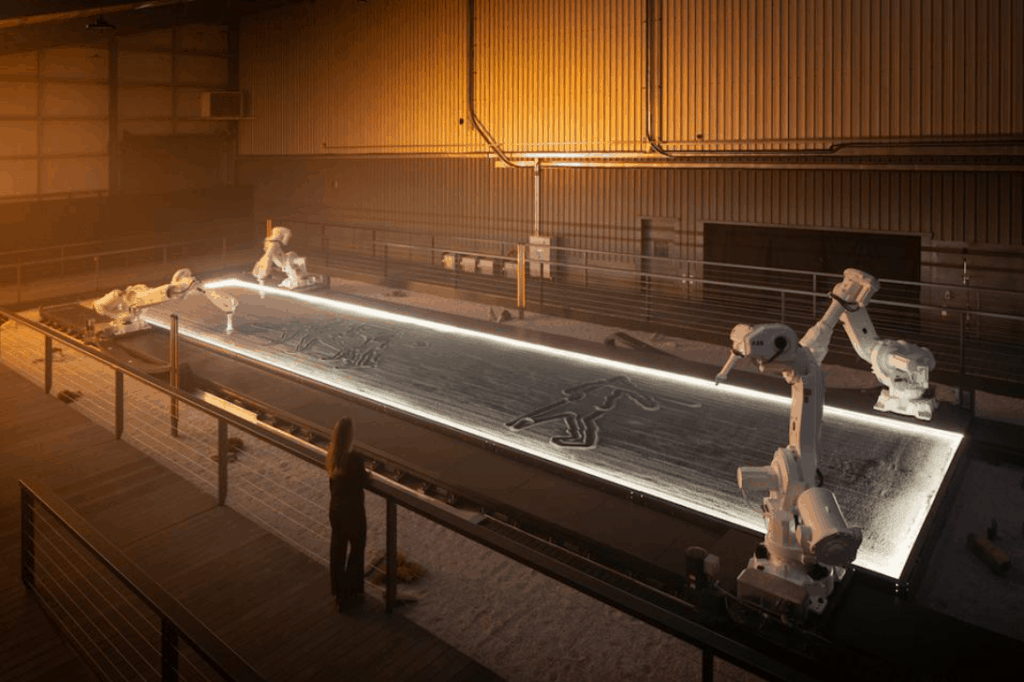 At the Tokyo Olympic and Paralympic Games, a large-scale robotic art project aims to interrupt urban life. “The Constant Gardeners,” a site-specific outdoor piece by London-based multi-disciplinary artist and designer Jason Bruges Studio, explores how, through art and design, technology can become a positive tool, encouraging us to slow down and reconnect in new and exciting ways with the world around us.

The Constant Gardeners, which will be unveiled in Ueno Park tomorrow (28 July), blends cutting-edge computers and industrial robotics with ideas found in Japanese Zen Garden traditions. Moreover, the "Gardeners" are recycled industrial robotic arms from the BMW automobile plant in South Carolina.

Bruges has collaborated with prestigious cultural organizations, and his art has been shown in London's Tate Gallery, Victoria & Albert Museum, and Natural History Museum. His interdisciplinary work explores the intersections of art, technology, architecture, and interactive design.

Daily performances of “The Constant Gardeners” will transform film footage of elite athletes' motions from a variety of athletic disciplines into dynamic patterns. Meanwhile, the robot gardeners rake into a large gravel canvas, collaborating to produce 150 distinct images. Some may concentrate on a single outstanding athletic moment, while others will depict an event developing over time, such as a race. I met up with Bruges to learn more about the project.

Banks, Nargess: This is a captivating exhibit. What led to the formation of the commission?

Bruges, Jason: The Tokyo Metropolitan Government and Arts Council Tokyo commissioned us to construct the artwork in February 2018, with assistance from the British Council.

Is it possible for you to describe the notion idea?

Human movement fascinates me, therefore we looked into the patterns that might be generated and how they could be represented using machinery. We felt there was a good analogy to be drawn between how athletes construct their bodies' motions to master their disciplines, the exact, repetitive movements of machines, and the Zen Garden tradition. Mountains, oceans, rivers, and flowing bodies of water — or karesansui — are created in these gardens by the monks' meditation motions. The lines they scrape into the gravel depict water flow, while the lines in our installation represent the athletes' actions.

You mention that you've been looking at time-based interventions and spatial experiences to engage people with their surroundings. What is the relationship between this and the Tokyo installation?

Visitors are encouraged to participate in a live, choreographed experience that represents the athletic disciplines competing at the Games on that particular day. The artwork may be seen as a keyframe or durational piece, in which you can watch the tale develop, with some drawings depicting a specific event, such as a race or a gymnastics performance, and others focused on a single instant or movement. Gazing at the ripples and marks from the garden's outer deck is like looking into the sky and attempting to interpret patterns and figure out what they signify — or pareidolia.

The robotic arms were recycled from the BMW automobile plant, as you said. Are these robot components that have been discarded?

The robotic arms are fully functional robots that have completed industrial operations like as welding, component placement, and fabrication assembly in a manufacturing environment. We've repurposed them to be utilized in a cultural setting for a limited time. They may, however, be repurposed for an industrial use owing to their toughness and hardness.

Is this link to the automobile — such a powerful emblem of industry and modernity, as well as trash and climate change — essential to the message you were trying to convey with this installation?

Industrial, agricultural, manufacturing, filmmaking, and even surgery are just a few of the applications for these robots. We focused on the robots' exact, deliberate motions and the way they are taught to follow extremely specific, coordinated routes for this artwork. Using the robotic arms in the exhibit to perform complicated, generative tasks, we sought to question how these robots were used and perceived, demonstrating their potential for creative, experimental activity.

Why did you decide to make drawings out of the athletes' video footage?

The majority of the worldwide public digests or understands the Olympic and Paralympic Games via video footage of the participants. As a result, this became a common method of getting information about the movements we were interested in. It meant we could automatically understand and translate motions from a number of sources, and we were eager to utilize this medium to give people a new and unique perspective on sports.

The human-machine relationship is a hot subject right now. I'd want to hear your views on the possibilities of robots and machine learning systems, as well as AI and other similar technologies, in improving our human lives.

Every technological advancement has a good and bad effect on our daily life. To adapt the athletes' motions to the choreographies in the artwork, we utilize sophisticated image processing methods to analyze, isolate, and process their movements. In medical diagnostics, the same algorithms, neural networks, and AI are utilized, and they are quickly increasing doctors' capacity to identify life-threatening illnesses.

In the midst of a pandemic, this must have been a difficult job to pull together...

The development process took 36 months, mostly from our London office, due to the epidemic. We collaborated closely with Phoenix, Global Robots, Brilliant Stages/Tait, British Council Japan, Arts Council Tokyo, and Murayama, who were all important in putting this project together so that the artwork could be presented in Ueno Park.

What do you think visitors to the Tokyo Olympics will take away from seeing "The Constant Gardener"?

We hope that visitors will feel inspired, peaceful, and reflective, and that they will leave with a fresh interest about how technology may be used to the human experience and the creative possibilities that this opens up.

“The Constant Gardeners” is on display in Fountain Square in Ueno Park, Tokyo, from July 28 to September 5.

Thanks to Nargess Banks at Forbes whose reporting provided the original basis for this story.