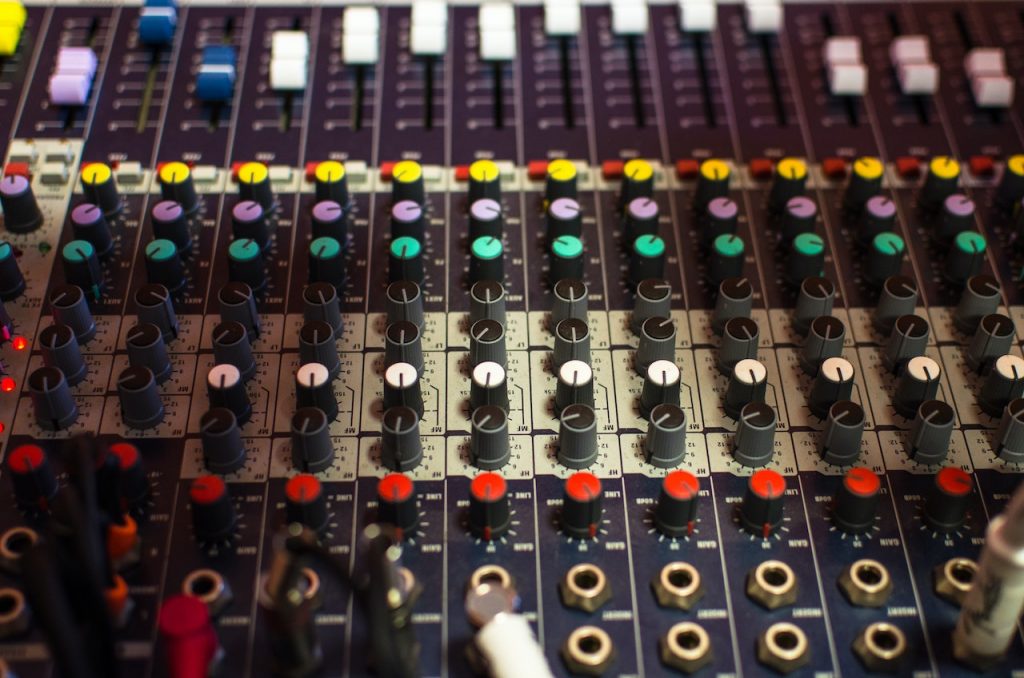 Audio engineers are often misunderstood, at least in the eyes of the layperson. But musicians know just how crucial engineers really are. Whether working in the studio or putting together a live concert, engineers are absolutely indispensable if you want to nail down exactly the right sound.

But plenty of listeners and concertgoers don't really know exactly what engineers do, and if you're one of those people, we hope to change that today.

We interviewed award-winning audio engineer Thaer Bader, who has worked on a number of high-profile live events, as well as extensive recording work, including the breakout track 'Pause For Humanity,' which was a massive collaboration between more than 88 artists.

As for live events, Bader has handled the Boston Marathon main stage for multiple years, the city of Boston's New Year's Eve celebration, and PVD Fest 2022. He was also the recipient of Mix Magazine's Outstanding Achievement Award.

On top of it all, Bader has also dedicated time to educating the next wave of top-level audio engineers by working with UCLA and Berklee Abu Dhabi Centeri.

We tried to cover as many topics as possible during our talk with Bader, including his path to engineering, rigorous planning for live shows, and upcoming projects.

Jam Addict (JA): How did you arrive at audio engineering? What attracted you to it?

Thaer Bader (TB): As a performer, I used to struggle a lot on stage because of my lack of knowledge in this field. I didn’t have the proper terminology to speak to the sound engineers about what I wanted and needed. Although I had the sound in my mind, it was very difficult to express it in technical terms and achieve what I was looking for. My journey with sound engineering began right after I was admitted to Berklee College of Music.

I came to study performance first, but I heard about this stage crew job on campus, and I applied to it in my second semester, and the rest was history. For the first time, I was on the other side, learning and watching my colleagues and helping other musicians, and that got my attention immediately. I knew that this was something I wanted to learn in-depth. 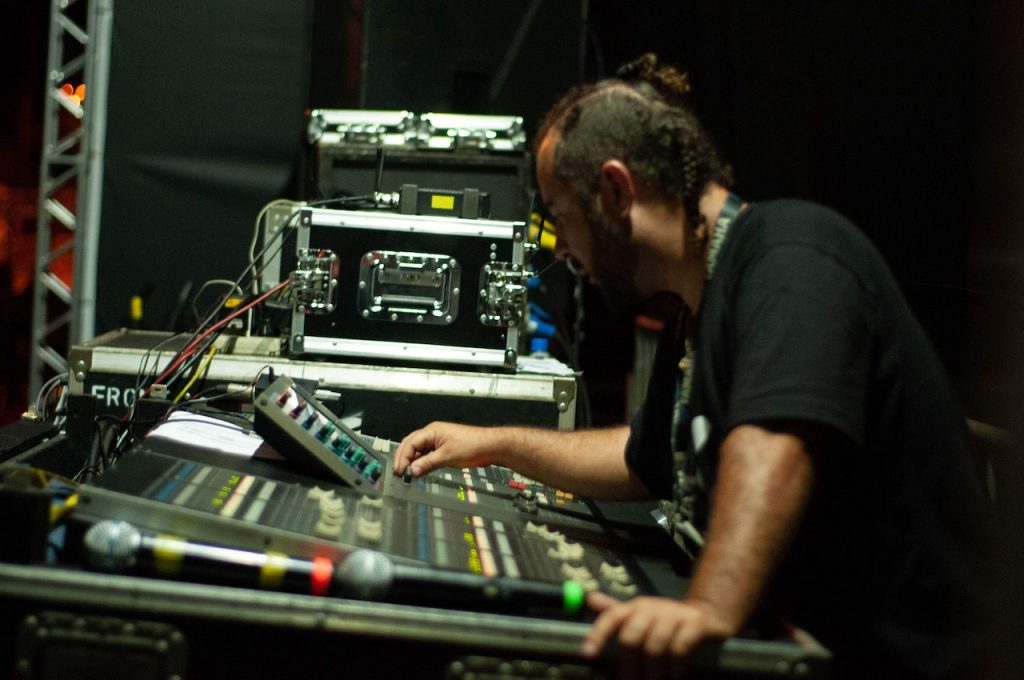 Because of my background in science and tech, I found it easy to blend in very quickly and learn the fundamentals. After working for a few semesters at this job, I decided to switch majors and apply for the Music Production and Engineering study program  at Berklee. Despite my experience with live sound, I was rejected twice because I didn’t show high academic scores. But I didn’t give up and worked very hard the next semester, earning a very high GPA, and that qualified me for acceptance.

I finished The MP&E major, with three other minors related to the field: an Acoustics & Electronics minor, an Audio for post-production Minor. Two years before my graduation, I started to freelance for one of the biggest audio companies in the New England area, Bergsten Music Inc, where I'm currently one of their lead audio engineers, and simultaneously I was the first student to be a production manager on campus before I graduated. That was a lot to accomplish in a very short time.

JA: You've worked on tons of major events. Is there an extra element of stress there?

TB: Stress is always there and it’s a necessity for the success of any event, in my opinion. The stress resembles my professional attitude towards my job and towards the client that hired us to do this job, and his trust in our abilities to do the job right.

JA: You also engineered 'Pause for Humanity.' How did that project come together?

TB: This was one of the most challenging experiences I've had so far. The idea started when my roommate asked me if I could help put this project together and if it was doable. I remember we were two months into the pandemic, and I had just invested in a Mac Mini, as the whole industry was shifting toward home production.

The first steps were to send a guideline for all 100 musicians who recorded themselves at home and without any professional gear. That was the first major challenge, figuring out how to make these recordings sound as if they were recorded at a professional studio. That took a lot of time to process and fix. Using mainly the RX 8 Advanced from Izotope, I had to go over 100 tracks and clean them, bringing them to the proper level.

The second part was the hardest part of this project: aligning these hundred tracks based on the score that I had from the composer and the arranger, and going through it note by note and fixing everything. It was very difficult for the musician to record a classical piece of the full orchestra without a conductor, so you can imagine the mistakes and out-of-sync problems I had to face.

After nearly 48 hours of work, I managed with the help of my roommates to finish editing the whole piece and lock the session and send it out for mixing and mastering in Spain.

JA: How did it feel to receive the Outstanding Achievement Award from Mix Magazine?

TB: I felt very honored and humbled to be recognized by the world’s leading audio engineers and producers for the work I was doing in the industry. It's been one of the highlights of my career.

JA: Can you tell us about your work in education? Do you enjoy talking with aspiring engineers?

TB: Talking with other engineers is one of the strongest tools to evolve and hear other opinions and ways to accomplish the same thing in a different way. The more I talk to them, I enrich my box of tools and craft it in a way to help me develop my workflow and make it more efficient. In this industry, things are very flexible, and my main goal is to try to achieve the best results through the fastest means. This is an ongoing process that will never end, and this is what I love about this industry.

JA: Looking back at all you've done so far, what's the biggest engineering challenge you've ever faced?

TB: One of my biggest engineering challenges was when I was assigned to be the lead engineer at the Wang theater in Boston. The client had requested two stages facing each other and I had to toggle between both of them simultaneously. On both stages, I had five zones: Left, Right, Subs, Front Fills, and Out fills, plus monitors on each stage. The main stage had one of the largest instruments in the world, called the Earth Harp. I had a Yamaha CL5 mixing desk, plus three units of digital processors to treat all zones. I decided to do this project over the network Dante in this case, rather than the old traditional analog method, meaning every piece of gear I had that day was Dante-enabled.

The first challenge was to fly four clusters of the d&b cabinets and match them exactly. For that, I had to plot the venue in Array Calc software by d&b and make all the measurements and calculate the splay of the PA and its coverage area. That on its own was not an easy task due to the limited time I had while I was building this whole setup. 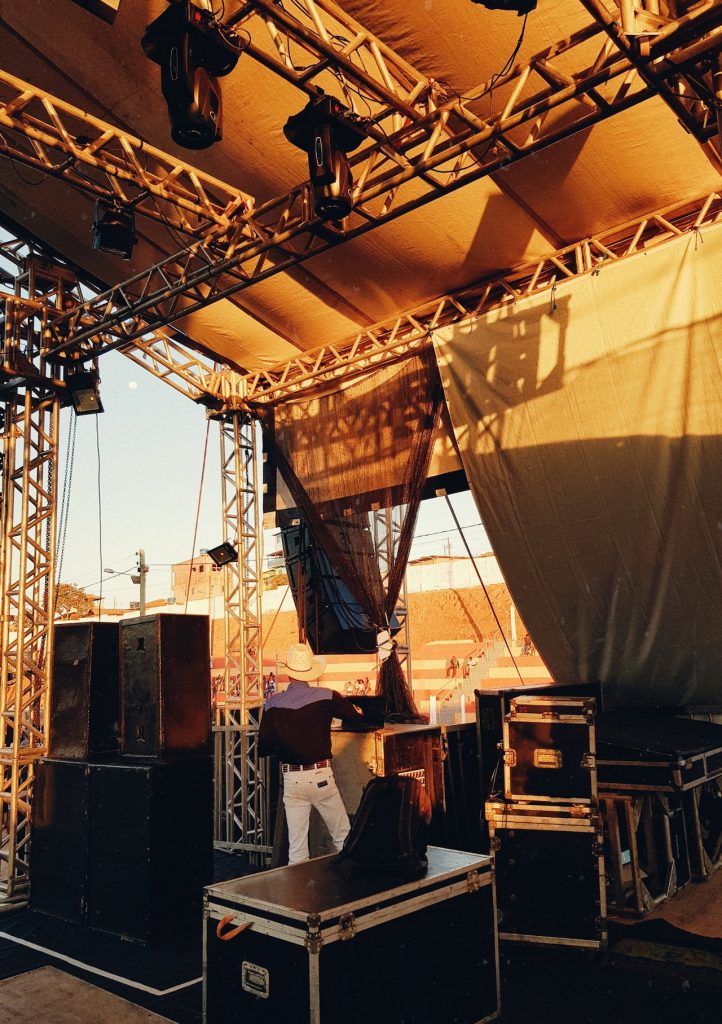 After flying the PA, I tested it to make sure it was working through the R1 software by d&b. I had to run Smaart software by Rational Acoustics to tune the system and execute all the time alignments between the zones on each stage. And before that, I had to patch everything through the Dante controller and establish all the subscriptions, starting from patching the outputs of the console from stage one to the first two units of the LM44’s inputs, and the second stage outputs to the rest of the LM44’s inputs.

But the main problem was that the CL5 console is limited to only eight matrixes, and I needed either five or ten per stage. To overcome this problem, I had to switch the console to be in surround mode, then I could use all 24 buses as matrixes. But still, I couldn’t use the first six outputs because they were in the surround mode. The major issue was that there were some inputs, I needed them to be routed to stage one only and not to the other, and by using L/R send to the Matrixes you can’t make that happen.

For instance, there was one person talking to the crowd from stage one, and he was presenting a video where the sound came from stage two. The crowd was sitting in between the two stages, and when he finished speaking, there was a video playing on the second stage, but his podium mic should come from the stage one PA only, and the video sound had to come from the stage two PA, and all that had to happen instantly.

In order to avoid toggling between muted groups or VCA groups between the inputs or outputs from stages one and two, I had to design the whole console in a nontraditional way, meaning all the inputs that had to be played through stage one were routed from my console to the designated PA, and vice versa.

This type of setup is not traditional in live sound engineering, but due to the situation, I had to improvise and make that workflow as seamless and smooth as possible. And on top of that, I had to mix one of the rarest instruments in the world with a percussion set and pretend that everything was easy and that there were no problems at all. All this had to be accomplished within four hours from load-in to sound check. The major challenge was basically to make sure everything was working properly without any major issues.

JA: How about your upcoming work? Are there any upcoming projects you can tell us about?

TB: I will be mixing FOH with the Cap Symphony in two weeks. It’s quite a challenge to mix full orchestras, due to the large number of musicians on stage and the number of inputs, roughly 65 inputs, plus 12 outputs. Also, I will be the lead engineer of the Boston Marathon event at Copley Square next year, as I've been doing it for the last few years as well.

Thanks to The Guardian whose reporting provided the original basis for this story.