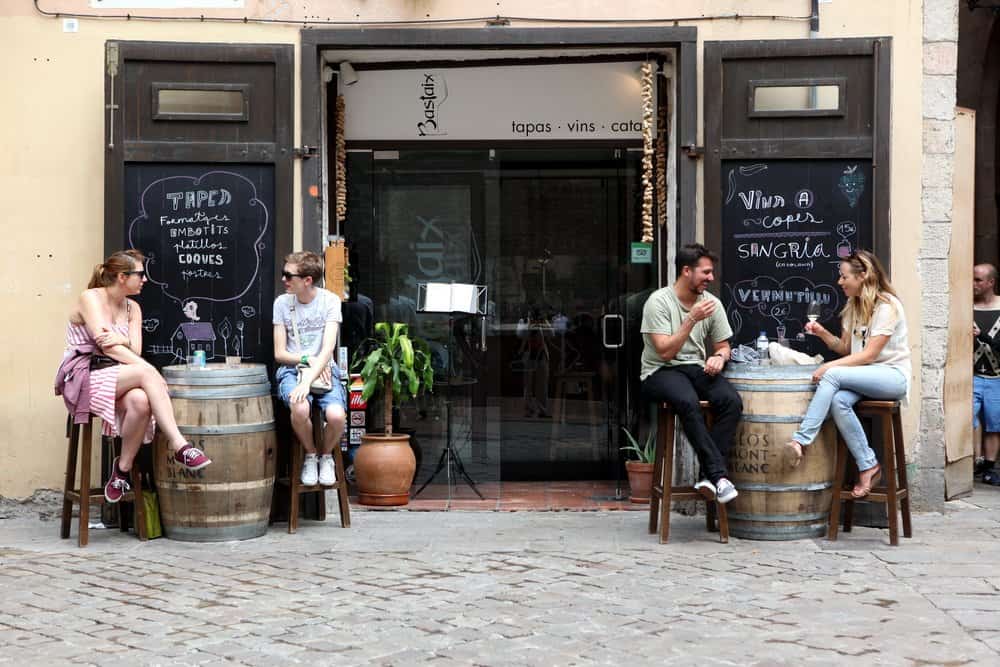 Barcelona has some of the best dining experiences in the world. The Michelin Guide awarded 24 restaurants in the city at least one Michelin star in 2019. That’s a lot of seriously good food you could get very fat on.

But dinner isn’t always about quality. Sometimes, you want an experience to go along with your food and drink. That’s when a guide to the weird, wonderful, and most unusual restaurants in Barcelona would come in handy.

You’re in luck, because that’s what you’re reading right now! If you want a show, puzzle, or demon from the bowels of hell with your meal, here are seven unusual restaurants in Barcelona you won’t want to miss. 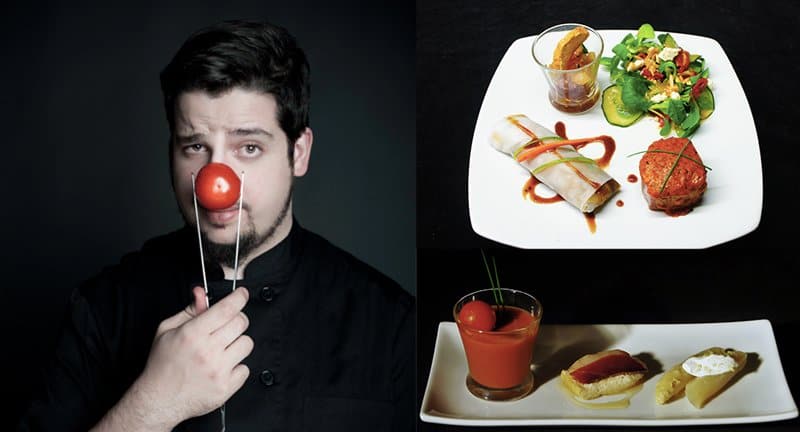 If you’ve always thought looking at your food was the least interesting part of a meal, Dans le Noir? Is the restaurant for you. The dining room is shrouded in complete, pitch-black darkness. The idea is that when your sight is taken away, your other senses are heightened, turning your meal into a “uniquely sensory experience.”

It also presents problems, obviously. While cutlery is provided, it’s easier if you just eat everything with your hands. The restaurant says not to wear nice clothes (no one will see them anyway) because of the high chance of spillage.

If you need to use the bathroom, one of the vision-impaired waiters has to escort you to stop you from bumping into all the other tables (the toilets mercifully have lights, or there would be a whole different kind of mess). And to keep patrons from being robbed in the dark, everyone puts their valuables in lockers before they go into the dining room.

You don’t even get to order off a menu. The waiters bring you food and you have to guess what it is as you eat it. Same with the wine. It’s so hard to tell red, white, and rosé apart by taste alone that the restaurant made it a game, and 90 percent of people fail.

La Posada Maldita scares the hunger right out of you 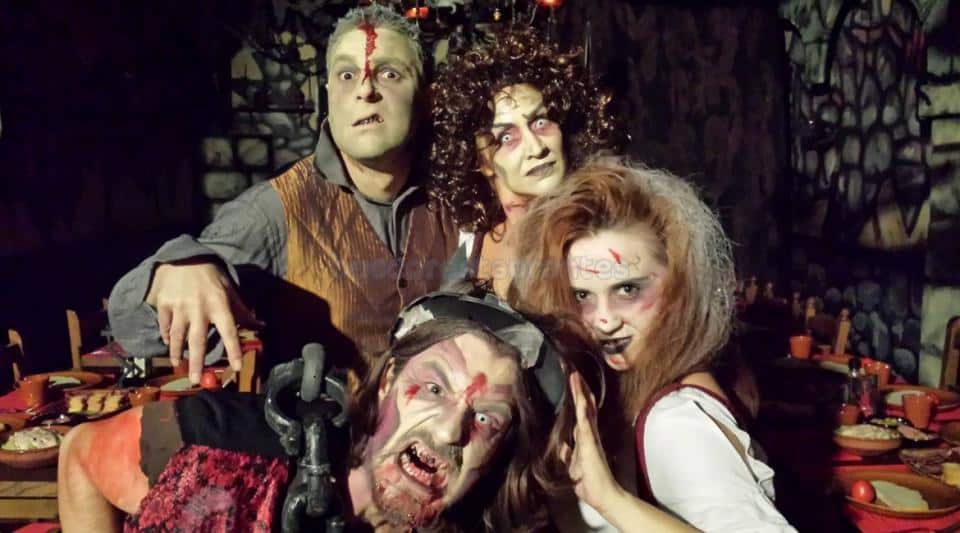 Calling itself the “most cursed place in the province of Barcelona,” La Posada Maldita works hard to live up to that eerie promise. At this restaurant, it’s Halloween every night, where you eat in a “dungeon-like” atmosphere and pass a graveyard on your way to the bathroom. Nothing like the specter of death to make you hungry for life-giving sustenance.

The waiters are just as creepy as the décor, dressed up in wigs and makeup that make them look like the undead or demons from hell, which might make you rethink eating anything they serve you. Despite obviously not making it as Hollywood actors, they take their roles seriously, put on a show while you eat, and never break character. Hopefully, no one needs the Heimlich when their waiter is “hopelessly insane.”

The terror extends to the menu, where your choices include such stomach-turning courses like “grimy zombie acne foam” and “weeds from our graveyard with crispy worms” (which you might think were pates and prawn cocktail, respectively, if you’re boring.) If you like a bit of terror to liven up your meal, this is the place for you.

Enigmatium puts your brain to work, as well as your stomach 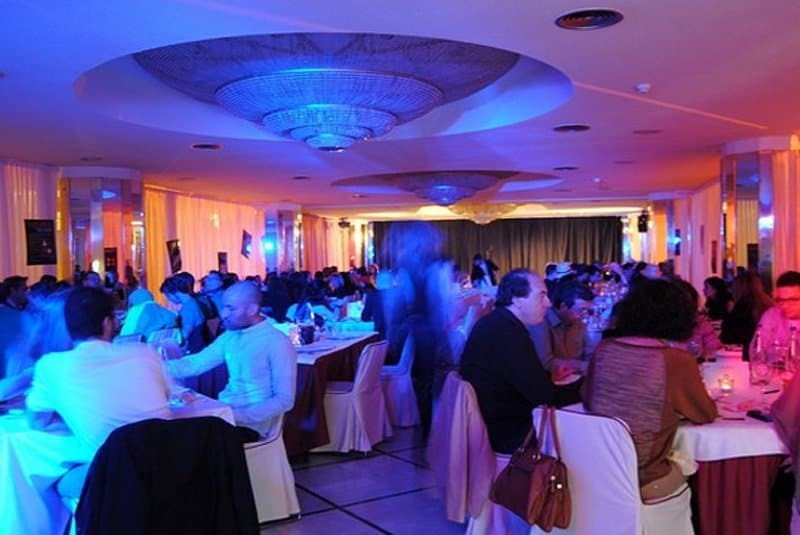 It’s amazing Enigmatium stays in business, considering they don’t even tell you where the restaurant is. Knowing how to get to the place you plan on eating is kind of key to the whole dining out experience, but Enigmatium lives up to the “enigmatic” in its name by making you solve a puzzle to figure out the location.

A few days before your reservation, you get a document with clues and if you can’t crack the riddle then too bad, you’re going hungry.

If you do manage to find the place, you’re treated to a three-and-a-half-hour show with actors and magicians. The puzzles don’t stop, either. Throughout the night guests are given more riddles to solve, competing with other tables to see who can figure them out first. You’re supposed to interact with people you don’t know, and it gets very lively. It’s definitely not the place for a quiet date night.

To make sure you are fully immersed in the show and disconnected from the outside world, phones are prohibited, which makes sense these days. What makes less sense is they make you remove your watch as well, so that time “stands still” the whole night.

Essence at Espaisucre will satisfy even the sweetest tooth 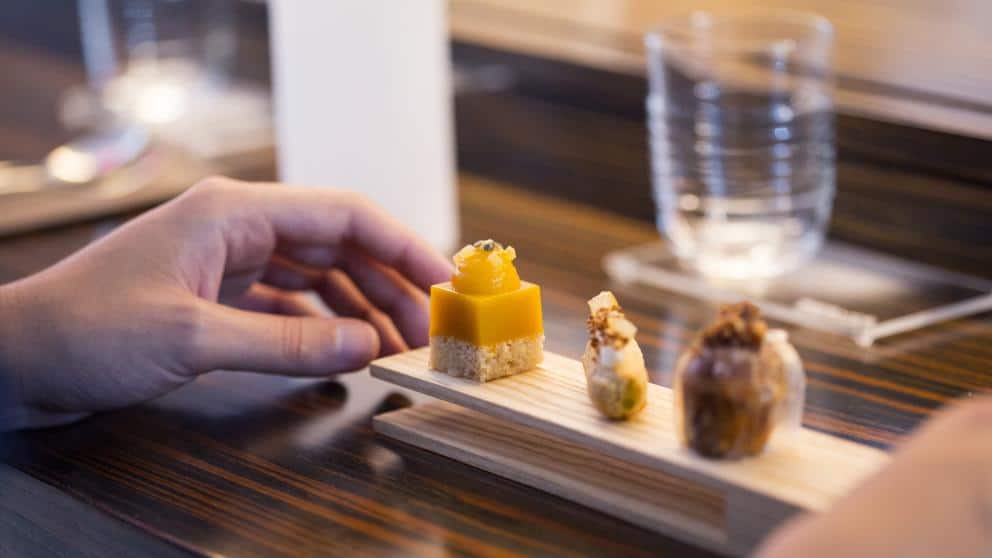 Sometimes you sit down at a restaurant, catch a glimpse of the dessert menu, and wish it was socially acceptable to just eat three courses of sweets. Thankfully, Barcelona has a restaurant where no one will judge you if most of your meal is dessert, because that’s their specialty.

Essence at Espaisucre is extremely exclusive, serving just 12 people a night. That already makes it cooler than most other restaurants. If you manage to be one of the select dozen diners, you’re served three salty tapas, three sweet tapas, and a whopping five desserts.

“The world’s first dessert restaurant” is attached to a pasty school and eating there is supposed to be a learning experience. Each dish is explained to you so that you understand the origin and reason behind all of them. Everything from the order of the meal to how the table is set up is “designed to enhance [your] consciousness of what [you] taste.”

That’s the official line, anyway. Unofficially, it’s a great way to stuff your face with loads of sugar. 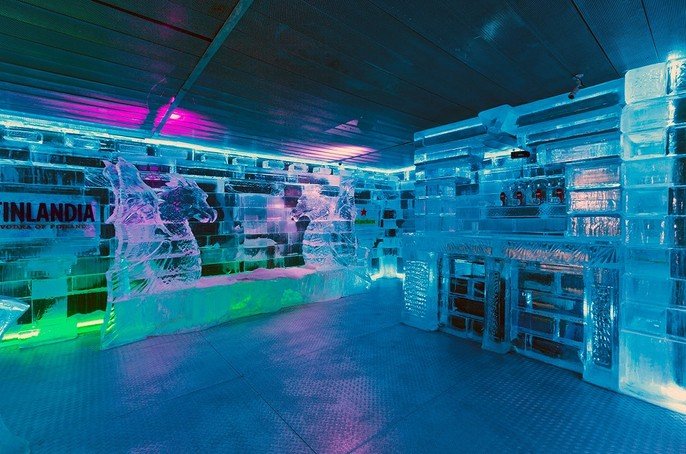 Technically, the coolest place in the city is Icebarcelona, since it’s literally made of ice and kept at a freezing 2°F/-10°C. Okay, they serve drinks, not food, but it’s still worth heading to on a night out if you’re trying to hit up the unusual places Barcelona has to offer.

And if you’ve just come in off the warm streets in very little clothing, don’t worry, they supply you with a puffy jacket and a pair of gloves. (They don’t give you shoes for hygiene reasons, though, so maybe skip it if you’ve got flipflops on, unless you want to lose a toe to frostbite.)

Inside, everything is made of ice, from the bar to the stools to the shot glasses. There are even ice sculptures of polar bears and a mini La Sagrada Familia. It all has to be re-carved every year, so the designs stay fresh and, well, cool.

Even with protective clothing, 50 visitors at a time are only allowed inside the ice bar for 45 minutes. After that you’ll need to head out to their normal-temperate beach terrace. 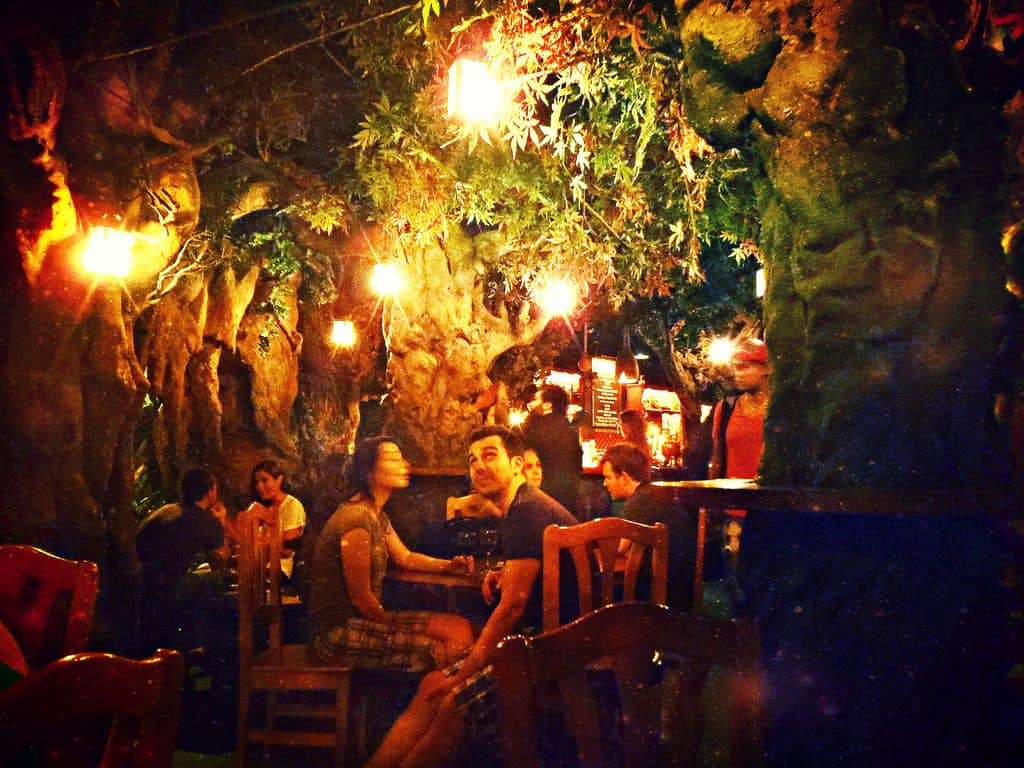 A wax museum isn’t the first place you’d think to go if you were hungry, but if you’re looking for an unusual restaurant experience in Barcelona, El Bosc de les Fades café is not to be missed. It’s extremely popular, especially with tourists, so get there early.

Once inside, you’ll find yourself eating and drinking in “a forest inhabited by strange trees, gnomes and other unexpected creatures.” The designers tried to put interesting and unexpected details on every surface and in every corner, like waterfalls, a haunted house, and a creepy-looking child’s room where you “go back in time.” Assumedly this is so you can return to a time you were hungry and thirsty, so you’ll spend more money on food and drink in the weird fairy forest.

Described by various guides as everything from “esoteric” to straight-up “sinister,” the café is filled with relaxing forest sounds. That is, until they turn out the lights and there’s a fake thunderstorm, which is “your cue to scare the bejeesus out of your mates.”

Gatsby Barcelona takes you back in time 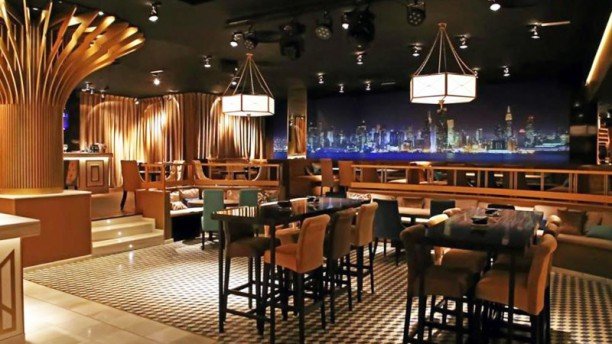 The moral of The Great Gatsby is that the American Dream of wealth, luxury, and happiness is ultimately unattainable, but that’s no fun to reflect on during a night on the town. What is fun is partying like it’s 1920s America, and you have plenty of money to enjoy yourself.

As Gatsby Barcelona quotes on their homepage, “a little party never killed nobody.” (Except, spoiler alert, it did, in fact, end up killing Jay Gatsby. It’s like these people were never forced to read the book in high school.) And they give you one heck of a party, with dinner and a show full of “music, dance and song” that changes numerous times a week.

Designed to look like a glamorous speakeasy, the “clandestine entrance gates” lead to a club full of glittering gold and shiny light bulbs, totally 1920s aesthetic.

Just like Jay Gatsby’s parties in the book, this club is very exclusive. There’s even a dress code: women need to look fashionable and men are required to wear collared shirts. There’s no slumming it if you want to feel like you’re back in Prohibition America, drinking illicitly and living the high life.

Kathy Benjamin is author of Funerals to Die For: The Craziest, Creepiest, and Most Bizarre Funeral Traditions and Practices Ever and editor of Grunge.com