What are the Traditional Music and Instruments From Brazil? 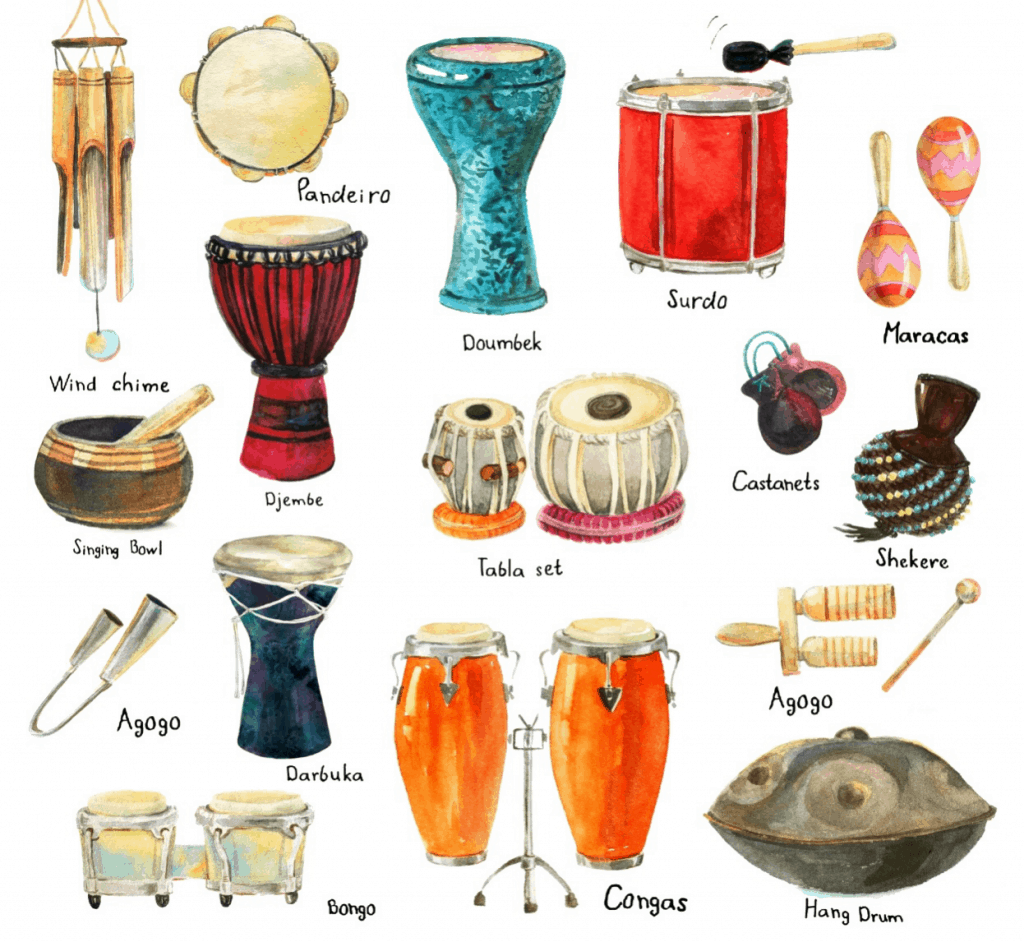 Brazil is renowned throughout the globe for its super-energetic and passionate music. Furthermore, this country is home to many different traditional musical instruments that produce unique sounds.

Initially, Brazilian Music was produced by using simple instruments such as horns, whistles, rattles, and flutes and incorporated a little stamping and clapping.

There are many musical traditions in Brazil in Brazil. The most famous probably is Samba. Samba is high-energy street music played by dozens of instruments and it is very rhythmically interesting.

Pagode is a subgenre of Samba, and it was traditionally played in times of celebration: i.e. food, dance, party.

However, it has since been commercialized and there are many big acts such as Beth Carvalho playing this in concert.

Capoeira is a type of dance, music and martial art. Originally a fight dance by the enslaved Africans in Brazil, it is now practiced among all people and heavy rhythmic music is an essential part of the dance.

The dance is associated with a strong percussive foundation from the instruments the berimbau, the atabaque, and the pandeiro.

The Instruments of Brazil 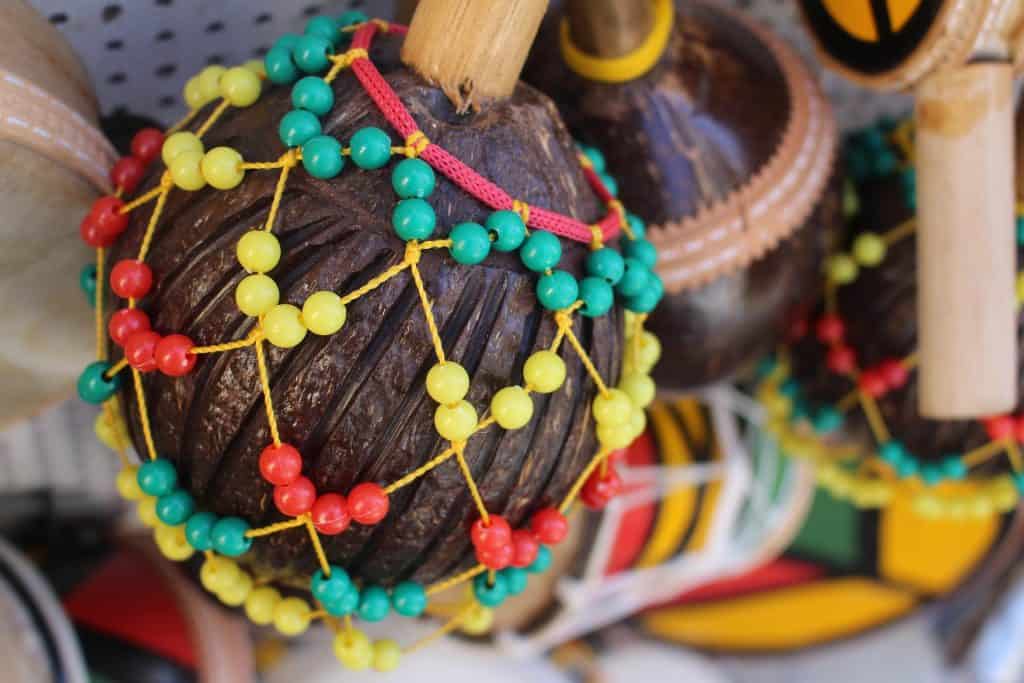 Over the last couple of hundred years, Brazilian music has transformed. Various instruments from other countries have been introduced in Brazil, which has affected its existing music styles and sounds.

There are various instruments used to create Brazilian Music. Most of them are popularly used in dances, religious festivals, fun activities, etc.

A few of the well-known Traditional Brazilian Music Instruments that are used to create Brazilian music have been mentioned below:

Brought to Brazil hundreds of years ago, Ganza is a tube-shaped cylindrical instrument made of plastic, metal or basket materials.

This instrument originated from Africa and was brought to Brazil by African slaves. It is woven by hand and is filled with sand, metal balls or plastic beads.

It is filled so that it creates a sound when it is moved. In simple words, a Ganza is a shaker instrument. Ganza is now played in Samba music.

Maracatu is a popular music and dance style in Brazil. The alfaia drum is widely used in the creation of Maracatu music.

Originating in Pernambuco, a city in Brazil, the alfaia drums are round and low-set (chunky) in stature. They look very familiar to the drums used by the US military.

The drum’s shell is created using a special kind of wood called the Macaiba wood. Stretched over the top of the drum is cow or goatskin.

The alfaia drums are strapped over the shoulders when played and wooden sticks are used to hit the drum to make the right sound.

The sound of the drum is also influenced by the tension of the ropes stuck across the drum that is attached to both the top and bottom. 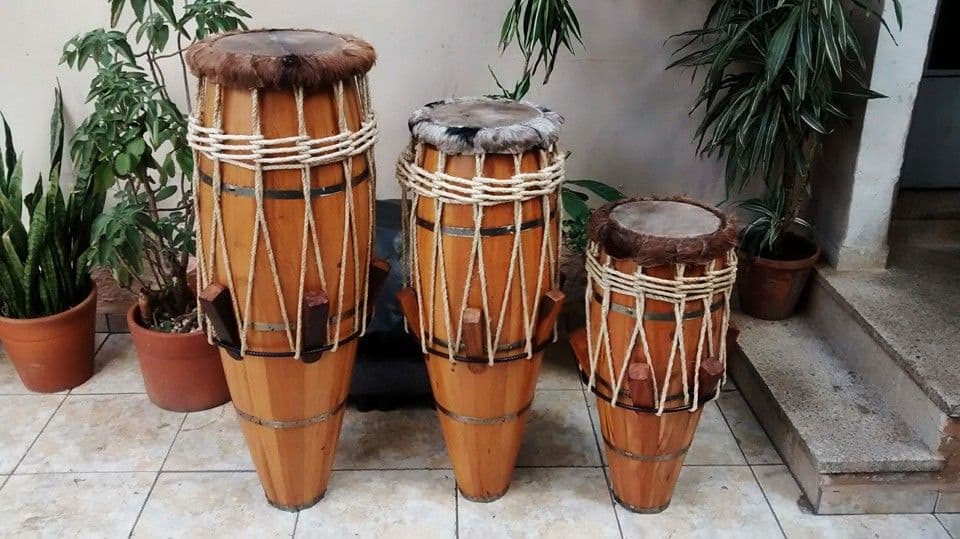 Belonging to the Afro-Brazilian origin, the Atabaque is a type of hand drum. There are three main types of Atabaque drums that are of different sizes. The tallest drum is referred to as Rum that produced a low sound.

Produced from a type of wood called Jacaranda, the Atabaque drums are used to create music for the Maculeles and Capoeira dance performances.

The roping is tightened or loosened to enable the adjustment of the drum’s pitch. Pieces of wood are also crammed between the bottom metal rings of the drum, which influences the sound of the drum. 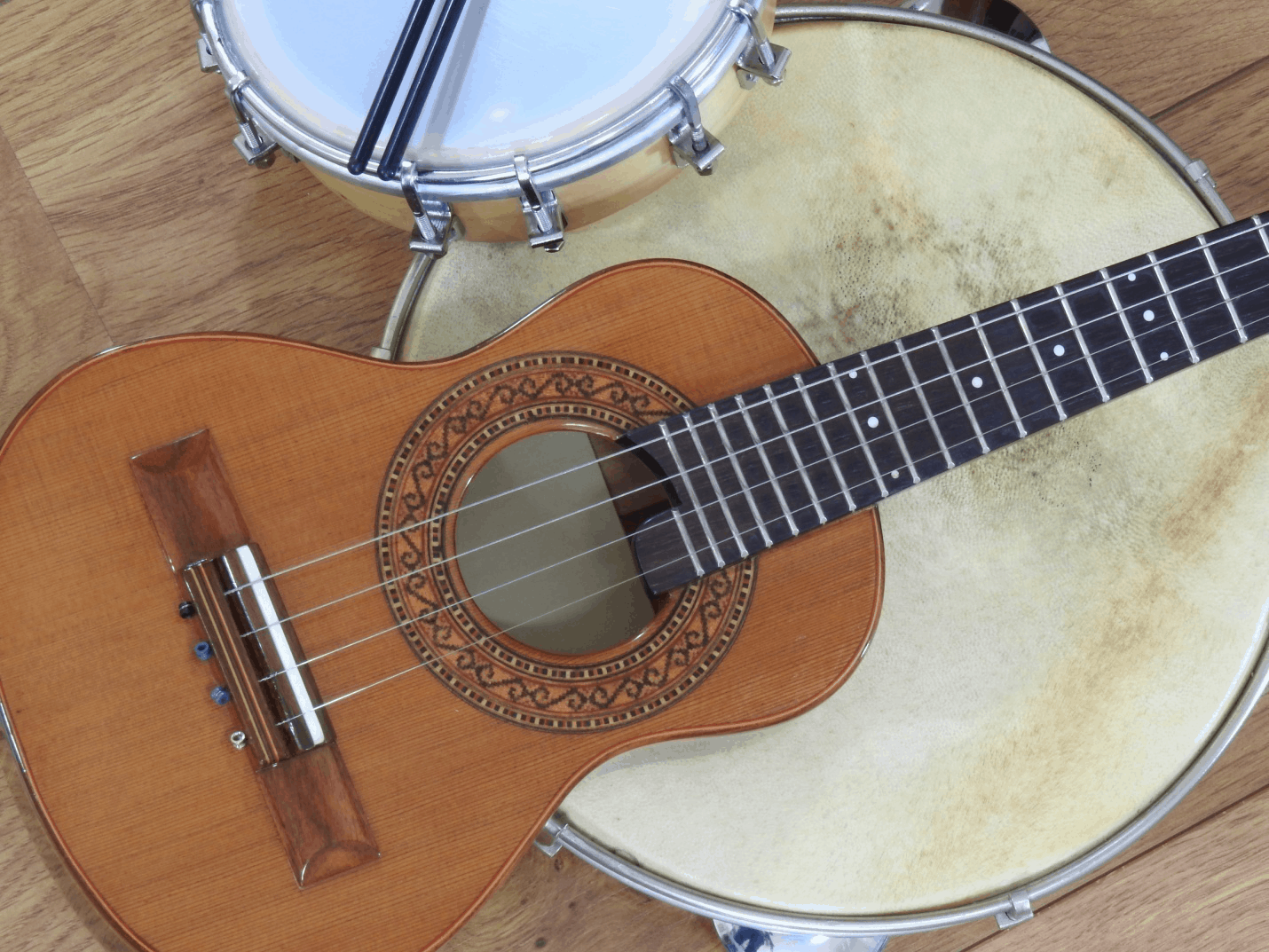 The cavaquinho is a small guitar-like instrument that bears a resemblance to the popular stringed-instrument called ukulele.

Often used to create Chorinho and Samba music, this instrument was introduced in Brazil by Portuguese explorers. The Cavaquinho or Machete is a guitar-like instrument made of wood and has only four wire strings.

Used in the creation of Samba Music, the Agogo is a popular traditional Brazilian musical instrument made from wrought iron.

Agogo is the oldest used instrument for Samba Music. In present times, the agogo is produced from different classifications of metals. It also has one or two bells of different sizes.

The shape and size of the bells determine the sound and pitch that an agogo makes. The most common type of agogo has two bells attached to a metal, which is shaped like the letter U.

The bell is struck with a wooden stick to create a sound. The agogo was highly inspired by similar instruments used by the people of Yoruba, who belonged to West Africa. 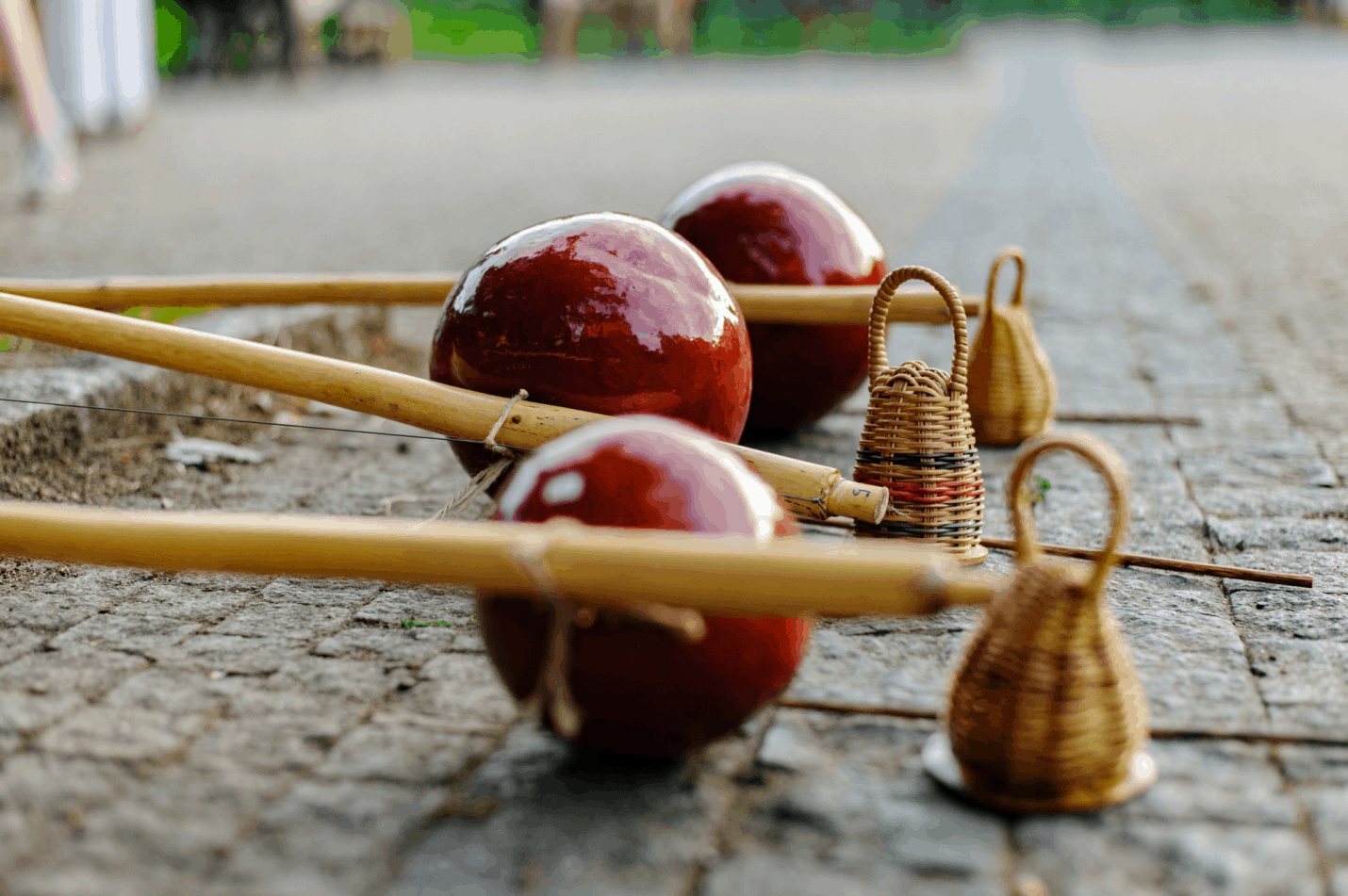 Berimbau bears an undeniable resemblance to an Indian musical instrument referred to as the Malunga. Berimbau originates from Africa and is usually used in Brazilian martial art, which is called the Capoeira.

Berimbau is a percussion musical instrument that makes sounds when it’s struck. This music instrument is made using a wooden bow, steel-string, and gourd.

The gourd is attached to the wooden bow after the steel-string is fastened to the bow.

This instrument is usually 4-5 feet in length. The gourd is meant to rest on the abdomen while a wooden stick is used to strike the steel-string to create musical sounds.

Three types of sounds are created using this instrument: open string sound, high sound, and buzzing sound. The tones of the berimbau are dependent upon the quality of the gourd and wood used to create it.

This instrument is similar to a tambourine and is a type of hand drum. The Pandeiro is held in one hand and struck by the other hand to create musical sounds.

To determine sounds (high or low), the head of the instrument can be adjusted.  The instrument is surrounded by metal jingles that are shaken to create sounds.

Some of the popular Brazilian music styles that use a pandeiro are samba, capoeira, coro, etc.

A frame drum used in many styles of Brazilian Music is the Tamborim. This instrument is beaten with a wooden stick or fingers to create sound.

As you can see, Brazilian music instruments are very diverse and are inspired by many other cultures. These were just some of the popular Traditional Brazilian Music Instruments; if you know any other instruments from Brazil, feel free to let us know!!