What were the drums used in the Civil War? 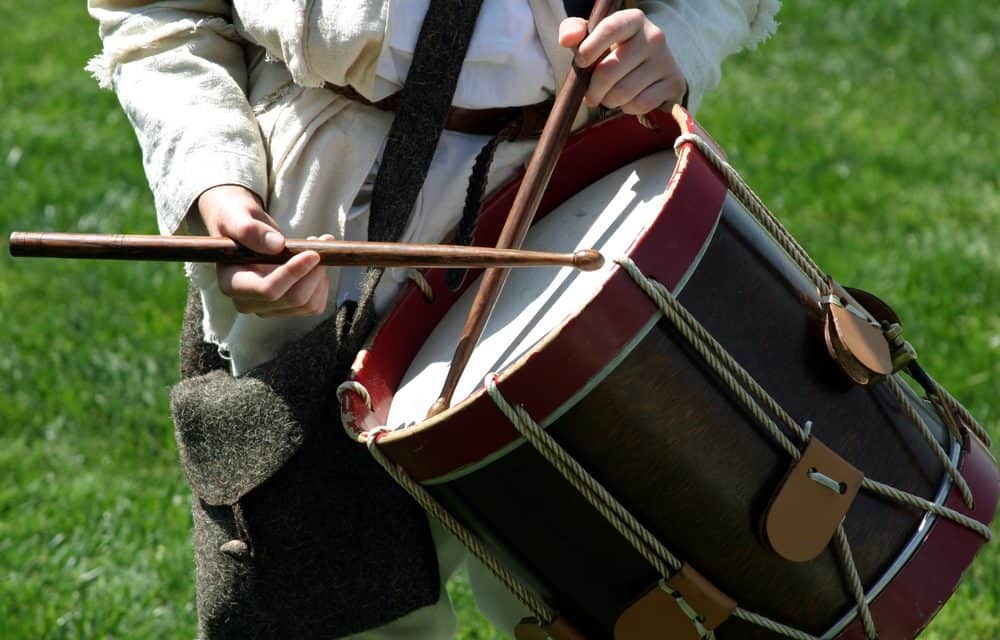 The civil war was a surprisingly noble time for being a drummer in American history. Boys (yes boys, many of whom were younger than 18) were lining up front and center to be apart of the battle that defined their generation, and musicians were part of that call.

Let’s take a look back to 1861 when both musicians (bugle players) and drummers would march with the troops towards the battlegrounds.

Drummers in particular played an important role in the Civil War. Instead of shouting out tactical orders to the troops, the drummers would execute a certain type of beat that would signal various commands on the battlefield.

Learning various drum beats was like morse code for telling the troops to “meet here”, “retreat” or of course the famous long roll (a set of drum strokes on that sounds like a buzz) which would signal “attack!”.

To be honest this must have been an eerie sound. Let’s put ourselves in the scenario: you are with your troops in the commotion of war, already with your senses ultra-heightened. Next thing you know, a sound grows louder as an army charges toward you along with 20 drummers buzzing away on their drums (the sound that we associate to the announcer who says “and the winner is…”).

All of this escalates to a roaring thunderous sound-chasm could be your death march. This puts this drum beat in a very different context for me.

However, as frightening as this situation could have been we have to acknowledge it was a unique time in history where drums and drummers could have that much influence in the country’s state of affairs.

Types of drums used in the Civil War 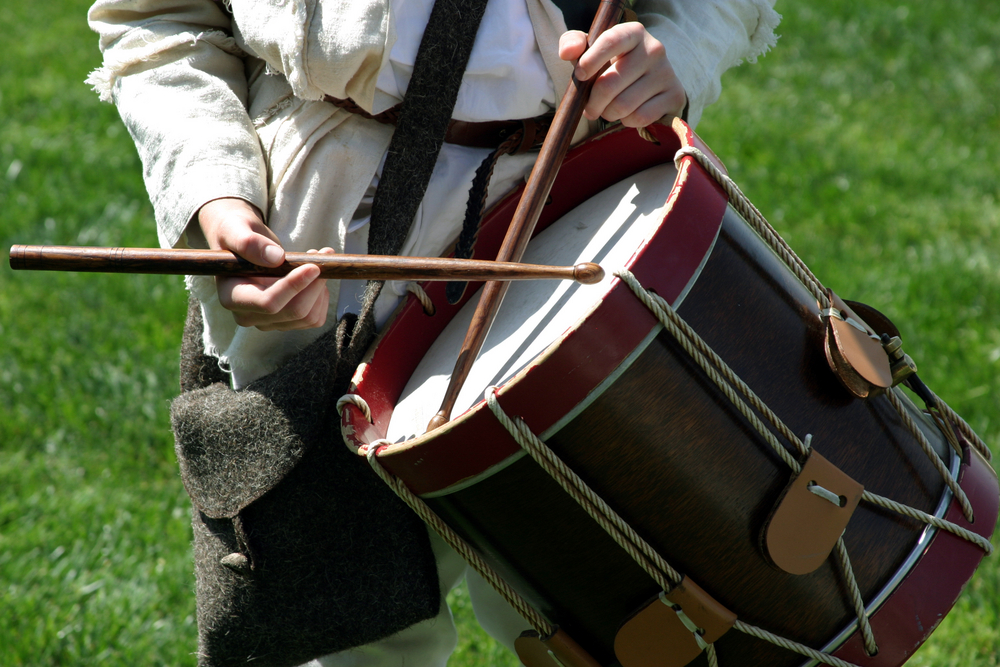 The drums used in the civil war were longer, deeper versions of the modern snare drum. They had snares wires on the bottom, producing the buzz and snap type of sound in snare drums, and their deep size was to produce the biggest sound possible to communicate to their fellow countrymen.

The drum heads sizes were not regulated yet so a typical drum could have a diameter of around 14”-16” and the length could have been anywhere from 13”-17”, which could get pretty heavy if you have to sling it over your shoulder and march into the front lines of battle.

The drum head playing surface was generally made out of calfskin or sheepskin and were fastened on with rope and hooked through the tension ears, which were two pieces of leather used to tighten or loosen the tension of the playing surface of the drum.

The drums itself could be made of stained maple or ash wood and could be seen to have decorative designs or patterns on them. The sling could be constructed with heavy cotton and the drums were even known to have a drum stick holder attached onto them.

Today these drums are not easy to find. Many were cut down or otherwise not preserved. Some of these that have survived can be very expensive—like $7000 for a snare drum. Most of these have understandably been bought by museums or collectors with a profit motive.

However there are some that have been restored that can be found much cheaper depending on the condition.

What was it like to play drums in the civil war?

The musicians and drummers would walk alongside the troops to the battles, however once the battles began they would promptly get out of the way. They did not carry weapons, so in theory they were non-combatants, however due to the messiness of war they did not get out so cleanly and they were known to be shot, injured or killed.

The drum calls which issued commands were in principle a smart idea—but in practice the hectic noise of the battles would drown out their calls, rendering them kinda useless. The soldiers and the drummers would have to travel in close proximity to one another, which made drummer boys a juicy target for the enemy.

It is true that in this time, gun-powdered weapons would produce a lot of smoke in a battle field, which made the prospect of following auditory commands all the more useful.

We can’t complete an article about drums in the American Civil War without mentioning Johnny Clem, the 9 year old boy who ran away from home to play drums for the Union. The Union did not adopt him at first in his home state of Ohio, however after much persistence and traveling Johnny was finally accepted into the Union in the great state of Michigan.

Actually, being accepted is a poor choice of phrase—Johnny was revered and held up as a mascot by the Michigan union fleet. The boy had tenacity, and despite his short size (he was reportedly very small) by the time he was 11 he was enlisted as a regular soldier.

Dangers of drumming in the Civil War 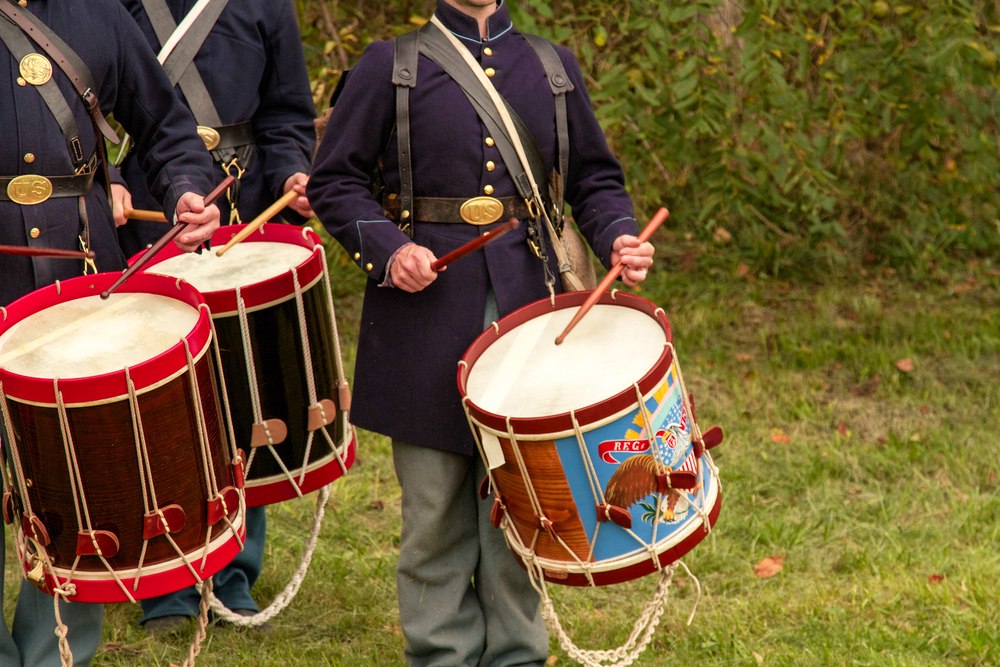 Clem wasn’t the only young buck to play drums in the war. Charley King was a young musician, and the oldest of 5 children who began playing the drums at 12 years old. At 13, he begged his father to let him join the ranks as a drummer in his home state of Pennsylvania.

King would practice relentlessly outside of the military base in hopes to impress the soldiers enough for them to give him a favorable referral to his father. They finally did, and after promising that musicians were well taken care of and kept out of danger, his father caved and let him join.

Throughout the year Charley King would impress his officers, and he was even promoted to drum major of the Forty-Ninth Pennsylvania Regiment. However then came the The Battle of Antietam, the bloodiest day in United States history. The battle took place in Washington County and a total of 22,717 people were dead.

One of those casualties was Charley King, who was pierced by a flying piece of shrapnel from an exploding enemy artillery. King was promptly rushed to the field hospital but in the end was unable to recover. He was the youngest soldier in the Civil War to die.